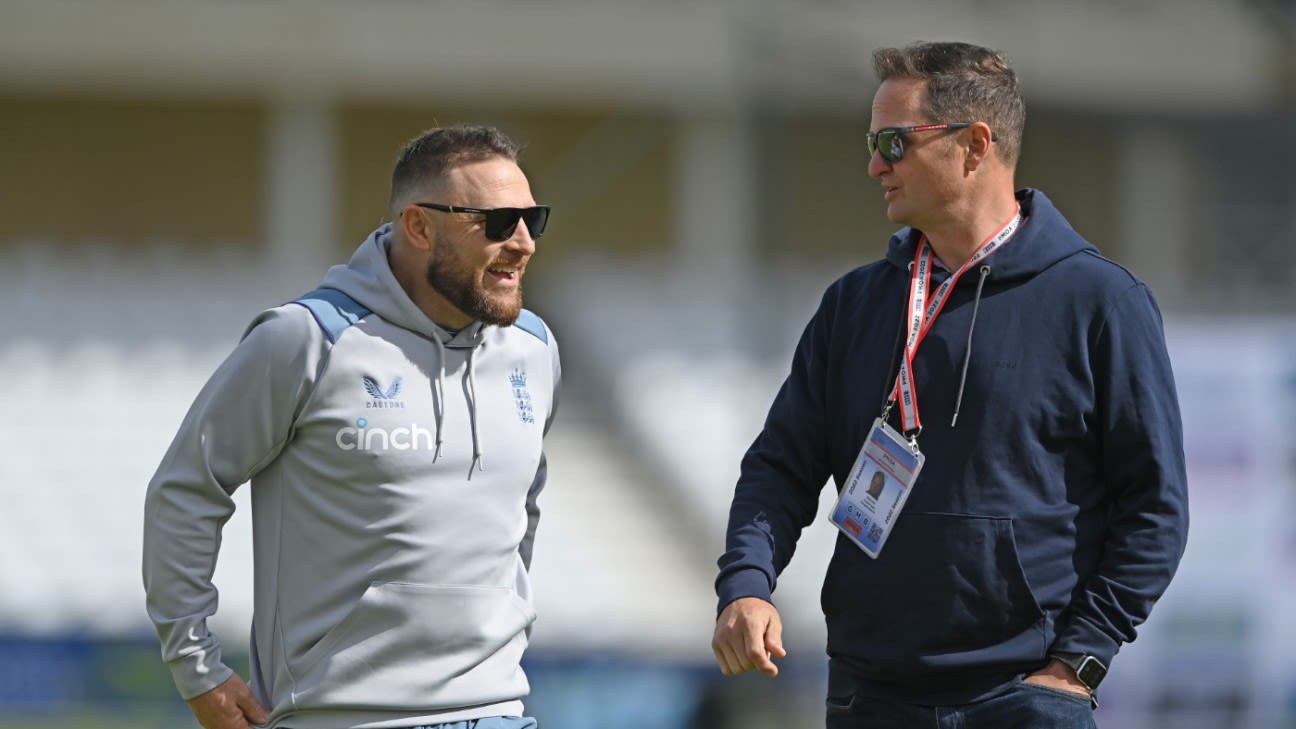 Rob Key, England men’s director of cricket, admits he has been surprised by the speed with which both the players and the public have bought into Brendon McCullum’s new vision for the Test team, but says he shares McCullum’s dislike of the phrase “Bazball”, because he feels it “devalues” what the team has achieved in the space of four Test wins in a row.
Speaking to the media during the second ODI between England and India at Lord’s, Key acknowledged that his appointment of McCullum back in May had been a “bet”, given that McCullum had never previously coached a red-ball team in his life, but he was pleased to have been vindicated by the startling upturn in the team’s fortunes, amid consecutive 270-plus run-chases culminating in an England-record 378 to beat India at Edgbaston.
Related
“The way that Test series went was really pleasing,” Key told Sky Sports. “I never thought it would go like that. I loved the fact that it seemed to capture the imagination of the public. That was not part of the plan but [Ben] Stokes and McCullum have somehow managed to do that. They’ve got the best out of so many of these guys, which is what the bet was, really.
“But I’m not mad on ‘Bazball’,” he added, echoing McCullum’s sentiments from last week. “It’s not our term, and it devalues a little bit what I think those guys have done. It doesn’t mean you can only play in the Test team if you’re going to be someone who’s going to play a shot a ball. That’s not what it’s about. They’ve soaked up pressure as well.”
A truer reflection of McCullum’s and Stokes’ influence, Key said, came in the little details of their man-management during the New Zealand and India Tests.
“I was here when we beat New Zealand at Lord’s, and I popped into the dressing room,” Key said. “Joe Root had played that magnificent knock and got us home, but Ben and Brendon made a real point with Alex Lees, who got 20 and at that stage hadn’t secured his place – ‘the way you played there, that set the tone. That’s what we want from you.’ It was the same with Jonny Bairstow, who had played a couple of big shots. And then you see how that has a knock-on effect later on.”
Key added that McCullum has also developed a means of reinforcing his message outside of the dressing room. “Brendon will make sure he gets a lift to the ground with one of the players, so he can work with them then and start talking them then, to try and get these players to free up and play their own version of Bazball, if you like. That’s what it’s been about.
“You could have someone who was going to be a hard taskmaster, who’s going to be really tough on the players, or someone who was going to try and free them up and get them to be able to express themselves better, to play and reach their full potential,” he added. “That was the bet I had, and that’s what Brendon’s done.”
Rob Key: ‘Can you imagine, that packed ground, everyone coming to see you … the only thing you couldn’t have done there was try and block out for a draw’•Lindsey Parnaby/AFP/Getty Images
In terms of the mindset shift that has taken place within the Test team, Key admitted that part of the change had been self-perpetuating – particularly on the pivotal final day of the second Test at Trent Bridge, where the decision to admit the day-five crowd for free (a move subsequently replicated at Headingley and Edgbaston) helped to create an expectation of entertainment.
“If you think back to Trent Bridge, the only option was to go for it,” Key said, reflecting on a run-chase that was lit up by Bairstow’s 77-ball hundred. “Can you imagine, that packed ground, everyone coming to see you … the only thing you couldn’t have done there was try and block out for a draw.
“It sounds simple to say that now, but that’s what you want to see, it’s just a better game. There’s something in it for everyone. In England, our culture is a bit like, ‘be careful of that, you can’t do this.’ But what [the team] focus on is what you can do.
“[People said], ‘you can’t do that against India’, or ‘you can’t do that against Australia’, or if the ball’s spinning … All right. That might be the case. But let’s just live for now, and try and play as well as we can, and deal with what’s in front of us.”
The first months of England’s new era haven’t been entirely plain sailing, given the white-ball team’s struggles to play with their usual freedom in the series against India. But Key dismissed the idea that the Test focus had cramped the style of the limited-overs team, particularly with the T20 World Cup looming in Australia in October, adding that the players most affected by the demands across formats – the 90mph-plus quicks such as Jofra Archer and Mark Wood – are currently unavailable anyway.
“It’s actually not so complicated, because we’ve got so many injuries to bowlers,” Key said, about balancing priorities across formats. “That problem will come when Jofra Archer’s fit, when Mark Wood’s fit. When you got those really quick guys, sometimes logistically, you can’t actually do it.”
Tags: Brendon McCullum, England, Rob Key