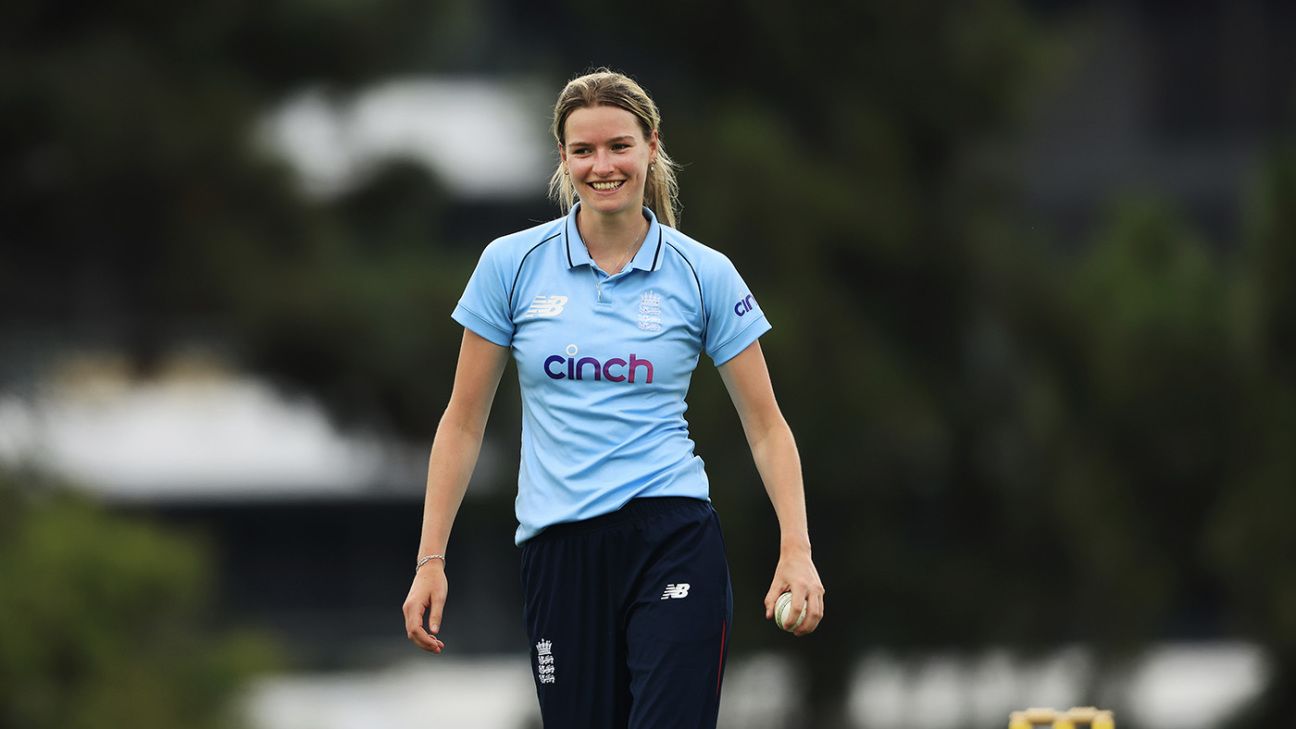 Lauren Bell is relishing her chance to join England Women’s next generation of fast bowlers as attention turns to the ODI leg of the multi-format series with South Africa.
Bell finds herself at the forefront of England’s succession planning, forming part of a new-wave pace attack with Issy Wong during the recent drawn Test, which kicked off the series in Taunton last month.
Both impressed sufficiently there to hold their places in the squad for the three ODIs, which also includes veteran Katherine Brunt, who has retired from Tests but is aiming to play a part in England’s white-ball fixtures this summer. England will, however, be without Anya Shrubsole, who retired from international cricket after the World Cup final in April.
“Anya and Katherine have been so amazing for so many years now, but I think it’s really exciting that there’s a group of us coming through,” Bell said. “Me and Izzy and Freya [Davies] are all in the same situation, we’re all trying to break into the squad and doing everything we can so it’s really nice to have other people in the same situation.
“Obviously, there’s that natural competition but it’s exciting for England cricket and it’s great to have so many options and so many youngsters coming through.”
Related
Bell took two first-innings wickets and played a part in reducing South Africa to 45 for 4 before Marizanne Kapp’s 150 rescued the tourists’ Test hopes and, while she went wicketless in their second innings, she only conceded 26 runs from 14 overs at an economy rate of 1.85.
Wong, meanwhile, took three wickets in all, including two in as many overs late on the third evening to leave the Test intriguingly poised before rain ruined the final day.
Wong received her Test cap in a stirring presentation by Brunt, and Bell said she had been moved after receiving her cap from Shrubsole, her team-mate at Southern Vipers, having joined as a player and bowling coach for this season, and at Southern Brave, where they will be reunited for a second season of the Hundred.
“She’s been amazing,” said Bell who, like Shrubsole, can threaten with her inswing. “At training I could just learn so much and she was so invested in chatting to me.
“Having her at the Vipers has been so great because it’s like she’s experienced everything that hopefully I can do in my career and it’s someone who understands what I’m going through, has probably been there and done what I might be struggling with or going through. It’s really great to have her around with a great perspective on everything.”
Bell was also looking forward to the chance to play alongside Brunt during the ODI series, which opens in Northampton on Monday.
“Everyone missed Katherine at the Test match, she’s got such an energy about her and it’s great to have her back,” Bell said. “In training she just wants to give off all of her knowledge and just share everything she’s got on to me and Izzy Wong, for example. She’s got a real energy about her and even though she’s played for quite a while now she still just loves it.”
Bell’s Test call-up came after she toured Australia with the England Women’s A side during the Ashes at the start of the year and went on to New Zealand as a travelling reserve for the World Cup. As a result, she said she felt settled within the England set-up ahead of what she hopes will be her maiden ODI appearance.
“We spent a lot of time with each other,” she said. “It’s a very open group but I feel really comfortable here now and I feel quite settled into this squad. It really helped being around and seeing how the system works, so I think it’s put me in a good place to hopefully put my hand up to make my debut.”

England have also retained Test debutant Emma Lamb, who was composed opening alongside Tammy Beaumont in Taunton, although she could move down the order depending on whether England decide to play Danni Wyatt as an opener or finisher. Alice Davidson-Richards, who made a century on her Test debut against South Africa, will be available for selection upon rejoining the squad after playing for South East Stars in the Rachael Heyhoe Flint Trophy on Saturday, scoring 42 and taking three wickets in a losing cause against Southern Vipers.
Emily Arlott, another tall quick like Bell, was not considered for selection in the ODI squad as she continues her return to fitness following a bout of Covid-19. Davies, part of the Test squad but overlooked on match day, also missed out on the ODI squad and was instead part of the England Women’s A side which beat South Africa by seven wickets in their 50-over warm-up match on Thursday.
Laura Wolvaardt, who fell to Wong twice for just 16 runs each time in the Test, and Kapp both made fifties in the warm-up while Chloe Tryon, who didn’t play in the Test, made 43.
The tourists will be without batter Lizelle Lee, who announced her immediate retirement from international cricket on Friday having played 184 matches for her country, 100 of them ODIs.
Bell expected South Africa, who won their group-stage fixture at the World Cup before England turned the tables in the semi-final, to prove “a real challenge” in the 50-over format.
“They hadn’t played a Test match for many years and they were a little bit less experienced, but South Africa have played plenty of one-day cricket and are really, really experienced in this format,” Bell said.
Tags: Anya Shrubsole, England Women, Lauren Bell, South Africa Women, South Africa Women in England