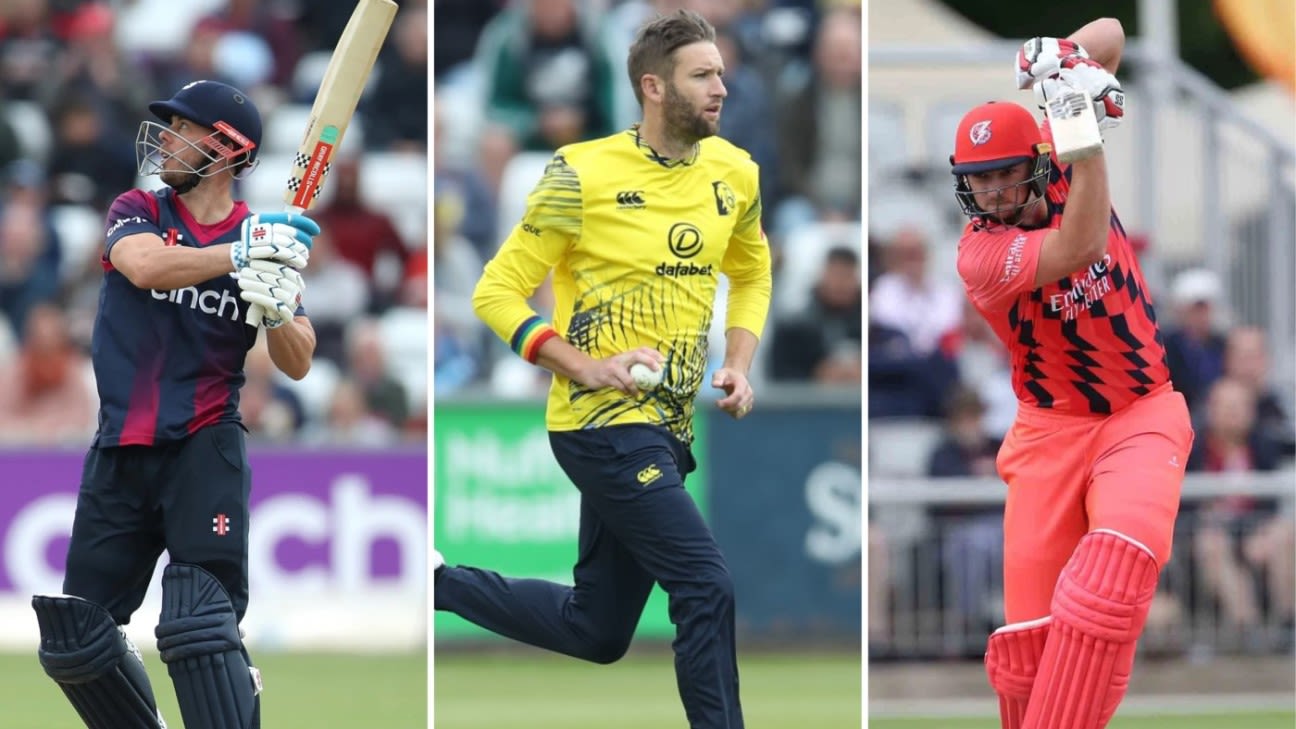 Tim David (Lancashire)
Innings: 14; Runs: 383; Average: 31.91; S/R: 179.81; 50s: 2
David produced numerous displays of his now well-known middle-order prowess, being particularly impressive in the first half of the group stage. He made 60 off just 25 balls to transform a stuttering innings against Worcestershire then unfurled 66 off 32 balls, including six sixes, in a high-scoring Roses encounter against Yorkshire which his team clung on to win. With Lancashire in the knockouts he has more chance to make a decisive impression amid the ongoing debate about how he fits into the Australia T20I side ahead of the World Cup.
Nathan Ellis (Hampshire)
Matches: 10; Wickets: 9; Average; 28.44; Econ: 7.01
The wickets don’t stand out for Ellis, but his economy rate does. Conceding just 7.01 runs per over made him the most economical frontline quick bowler during the group stage. Missed a few matches with a groin niggle that probably prevented him being called into the injury-hit Australia squad in Sri Lanka.
Chris Green (Middlesex)
Innings: 12; Runs: 177; Average 25.28; S/R 147.50 | Wickets: 14; Average: 27.14; Econ: 8.14
A handy all-round tournament for Green, after he ended up replacing Mujeeb Ur Rahman throughout, in another Middlesex T20 season that fell flat. Had a good outing against Kent at Lord’s where he took 2 for 18 off his four overs in one of the team’s four victories and made two 40+ scores although both came in defeats.
Hayden Kerr (Derbyshire)
Matches: 14; Wickets: 15; Average: 24.06; Econ: 9.13
Another part of Kerr’s rapid development over recent months after signing an all-formats deal with Derbyshire to replace Suranga Lakmal. Although the economy was on the high side, he chipped in with wickets throughout to the extent he ended the group stage as the team’s third-highest wicket-taker. Derbyshire have reached the quarter-finals so his tournament isn’t over yet.
Chris Lynn (Northamptonshire)
Innings: 10; Runs: 516; Average: 64.50; S/R: 159.25; 100s: 2; 50s: 4
The star performer among the Australia contingent, Lynn let his bat do the talking after his departure from Brisbane Heat and speculation as to whether he will be picked up by another BBL club. On all bar one occasion that he reached double figures he went on to score at least a fifty. That included a 106 off 66 balls against Leicestershire and 113 off 57 deliveries against Worcestershire but his pyrotechnics were not enough for Northants to progress.
Ben McDermott is among those who will be part of the quarter-finals•Getty Images
Ben McDermott (Hampshire)
Innings: 14; Runs: 340; Average: 24.28; S/R 136.54; 50s: 3
A middling group stage for McDermott but he may have come out from a run of five-single scores just in time for the quarter-finals after making 50 and 30 in his last three knocks. Enjoyed a solid run earlier in the tournament which included a ferocious 83 off 30 balls against Middlesex.
Michael Neser (Glamorgan)
Matches: 10; Wickets: 13; Average: 18.53; Econ: 7.77
Reliability from Neser in a campaign where Glamorgan couldn’t find consistency. He claimed three three-wicket hauls, including a career-best 3 for 13 against Essex. He was also the team’s most economical bowler.

July 6: Surrey vs Yorkshire – The Oval

Daniel Sams (Essex)
Innings: 9; Runs: 140; Average: 20.00; S/R: 177.21; 50s: 1 | Wickets: 14; Average: 26.85; Econ: 8.98
There were moments of impact for Sams, not least his astonishing 71 off just 24 balls against Sussex in a high-scoring game at Chelmsford. It was the first time since his unbeaten 98 against Melbourne Renegades in the last BBL season that he had reached 20. His bowling economy would sometimes blow out, but he took 2 for 22 off his four overs against Kent to set up a win, and his season-best of 3 for 20 came in the final group match after Essex had plundered an eye-watching 254 for 5 against Glamorgan. The sort of player who could win a knockout match.
Peter Siddle (Somerset)
Matches: 9; Wickets: 14; Average: 18.42; Econ: 8.27
A useful contribution from Siddle as Somerset reached the knockouts which included an important performance against Gloucestershire to help secure victory. He also came within a delivery of pulling a game out of the fire when he almost denied Surrey with three wickets in his final over, but his last ball was sent to the boundary.
AJ Tye (Durham)
Matches: 10; Wickets: 21; Average: 14.76: Econ: 8.94
Another good bag of T20 wickets for Tye and he finished the group stage tied fourth overall despite only playing 10 matches. Took an important 3 for 29 against Lancashire in what became low-scoring scrap (he was there at the end with the bat, too) then bagged 5 for 38 against Leicestershire but that came in a defeat.
Other Australians who have appeared this season
Jason Behrendorff (Middlesex), Hilton Cartwright (Derbyshire), Dan Christian (Nottinghamshire), Aaron Hardie (Surrey), Matthew Kelly (Northamptonshire), Marnus Labuschagne (Glamorgan) James Pattinson (Nottinghamshire), Josh Phillippe (Sussex), Ashton Turner (Durham)
Tags: Andrew Tye, Ben McDermott, Chris Green, Chris Lynn, Daniel Sams, Derbyshire, Durham, Essex, Glamorgan, Gloucestershire, Hampshire, Hayden Kerr, Kent, Lancashire, Michael Neser, Nathan Ellis, Northamptonshire, Nottinghamshire, Peter Siddle, Somerset, Surrey, Sussex, Tim David, Vitality Blast, Worcestershire, Yorkshire