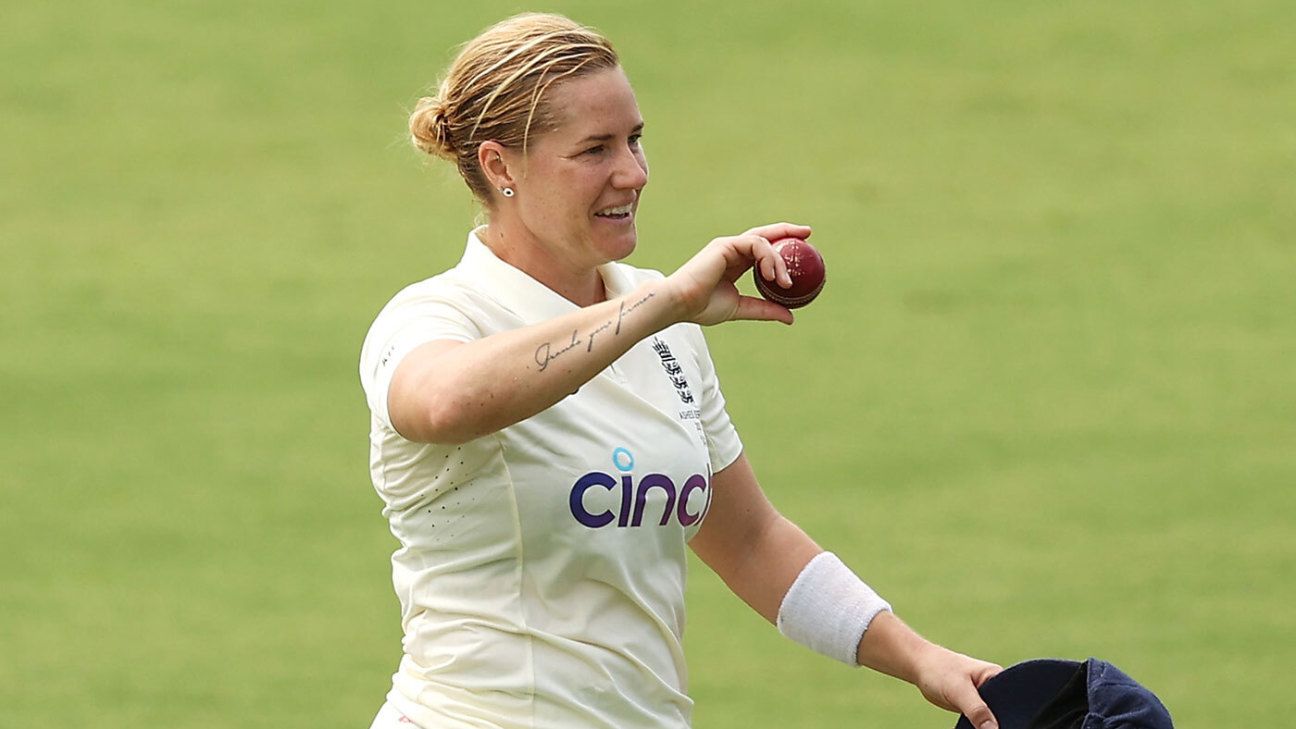 Katherine Brunt, England Women’s leading international wicket-taker, has announced her retirement from Test cricket. She will continue to be available for selection in the limited-overs formats.
Brunt made her Test debut in 2004, and a year later was named player of the match after taking nine wickets and scoring a half-century as England won the Ashes for the first time in 42 years. She claimed a five-for in her last appearance, against Australia in Canberra over the winter, and retires with 51 wickets in the format – the ninth-highest of all time.
Her decision means that Brunt will not be involved when England play South Africa at Taunton in the one-off Test – their first four-day encounter since 2003 – starting on June 27.
Related
“I feel like as an athlete there is never an obvious time to step away from doing the thing that you love,” Brunt said.
“But over the past two years thoughts of retirement have surfaced more and more, so I’ve decided to make a smart decision rather than an emotional one. Test cricket is my absolute passion and to retire from this format was truly a heart-breaking choice to make, but it allows me to prioritise white-ball cricket.
“I know that I leave it in a great place, the bowlers coming through are ready and they’re just itching to be let loose. And with the South Africa game around the corner, I’m very much looking forward to watching them from the best seat in the house.”
Brunt, 36, played only 14 Test across an 18-year career, largely due to a dearth of fixtures in the longest format. She never bettered her performance at Worcester in 2005, but revived memories of those glories with 8 for 84 as England drew a thrilling Test in the winter’s Ashes.

Two bits of Brunty brilliance in the Test arena!

Jonathan Finch, director of England Women’s cricket, said: “Katherine’s passion and commitment was never more evident than when she played Test cricket for England and you only need to watch the last Ashes Test to see her desire, her heart and her undoubted ability with the red ball in hand.
“She has given everything for England Women in Test cricket and we are fully supportive of her decision to focus on white-ball cricket on the international stage. Katherine can leave the red ball behind knowing she is a true legend in that form of the game and that she has set standards that future generations can only aspire to.”
As well as facing South Africa and India in bilateral white-ball series this summer, England will also be looking to challenge for T20 gold at the Commonwealth Games.
Brunt is England Women’s leading ODI wicket-taker, and second only to Anya Shrubsole, who retired from international cricket earlier this year, in T20Is. Both players will be involved in the Hundred, the second season of which begins after the conclusion of the Commonwealth Games.
Tags: England Women, Katherine Brunt