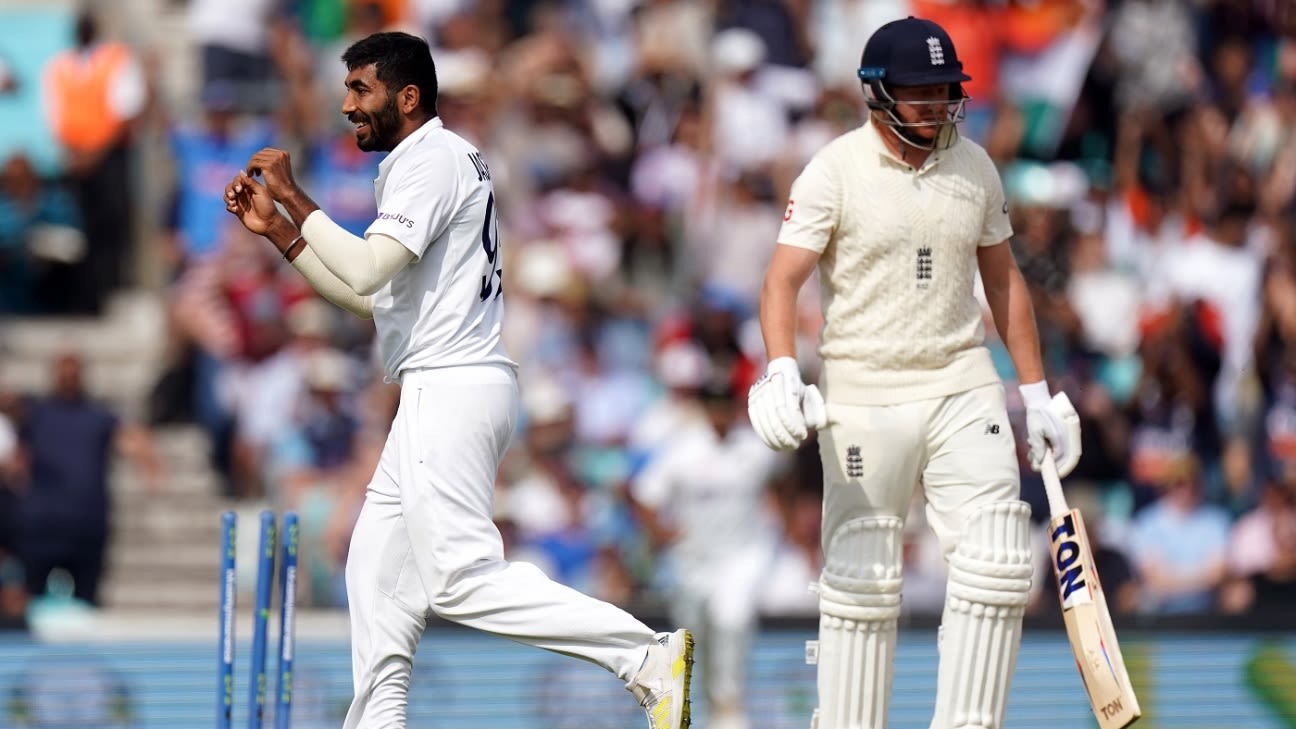 It kind of doesn’t feel right, but in a Covid-19 world, we must make do. This was supposed to be the grand finale of a thrilling Test series that had packed drama, emotion, storylines and loads of skill, endurance and discipline. It was all headed for one final Test with India chasing a historic series win and England fighting to defend their home turf even though they didn’t have a chance to win the series. Then Covid-19 struck India’s support staff and the series was forced to be postponed.
Related
The stakes remain the same but it just doesn’t feel the same. You can’t get the feeling of running the final five miles of a marathon after a break. That endurance test of that series is gone. The test of the conditioning of the fast bowlers, of the batters’ ability to concentrate one final time with all to play for. And we aren’t even talking of how much things have changed outside of that actual contest between bat and ball.
Both teams have a new captain and a coach. England after the Ashes and West Indies debacle, India because their leadership at that point had probably given the jobs all they had. England’s new leadership has made a rollicking start with a 3-0 Test series win against New Zealand but India – while just as successful at home – have hardly had a steady captain away from home. Even in this, they are without their full-time captain and their best batter over the first four Tests. The second-best batter was already ruled out. Jasprit Bumrah is India’s eighth captain in international cricket since Rahul Dravid took over as coach.
Test cricket overall seems to have changed in the last month or so. The pitches in England have been flatter, spinners have had a role to play, scoring rates have erupted, and people are going around suffixing “ball” to coaches’ nicknames. Even Galle, one of the slower-scoring venues in Test cricket, is conceding four runs an over.
Jasprit Bumrah will lead India in place of Rohit Sharma•PA Images via Getty Images
Amid all these changes comes this decider for a series that was played by different personnel under different captains in what feels like a different era. We must make do, and not wonder what would have happened had the exhausted spirits, tired bodies and scared minds continued playing the last year.

You have to feel for Virat Kohli. He went against conventional wisdom last year to leave out one of India’s best spinners of all time for a rookie fast bowler. This series was the epitome of his captaincy career: an obsession to win overseas, backing his fast bowlers, making unpopular calls at a time when there were counters refreshing every day he went without an international century. This at a time when he knew he didn’t have too many Tests left in him as a captain. He deserved to have one final say at what might have been a triumph next only to the Australia series win earlier that year, a series he happened to miss. Kohli still can have a final say in this final Test but not as a captain. His runs are going to be crucial, especially with India’s two best batters over the first four Tests out of commission.
Jonny Bairstow scored 184 runs at a strike rate of 48.93 in the first four Tests of this series. It had to do in part with the conditions, the bowling, his luck etc. but a lot of it was down to his intent. In the three Tests against New Zealand, he scored 394 runs at a strike rate of 120.12 albeit in friendlier conditions. He has got rid of the “rubbish” that cluttered his mind thanks largely to Ben Stokes the captain and Brendon McCullum the coach, who might just ask him again, “Fancy another Trent Bridge?”

England have named their XI already, and a predictable one at that, which includes a specialist spinner. That might tell you something about the conditions expected.
England: 1 Alex Lees, 2 Zak Crawley, 3 Ollie Pope, 4 Joe Root, 5 Jonny Bairstow, 6 Ben Stokes (capt.), 7 Sam Billings, 8 Matthew Potts, 9 Stuart Broad, 10 Jack Leach, 11 James Anderson
Ben Stokes will lead England in the fifth Test•AFP/Getty Images
India have two big questions. One is a conditions-based choice between Shardul Thakur and R Ashwin as the bowler who can bat at No. 8. Ashwin didn’t play any of the four Tests last year but the conditions have been different this year, raising the probability of his playing. The other question is a forced one: who replaces Rohit Sharma? The likelier options are Cheteshwar Pujara, who was dropped from the squad earlier this year, and Mayank Agarwal, who has just been flown in as back-up for Rohit. The other two less likelier options are Hanuma Vihari and KS Bharat.
India (probable): 1 Shubman Gill, 2 Cheteshwar Pujara/Mayank Agarwal, 3 Hanuma Vihari, 4 Virat Kohli, 5 Shreyas Iyer, 6 Rishabh Pant (wk), 7 Ravindra Jadeja, 8 Shardul Thakur/ R Ashwin, 9 Mohammed Shami, 10 Mohammed Siraj, 11 Jasprit Bumrah (capt.)

The pitch wears a beige look but that could be deceptive: it is hard with tufts of live grass. There are chances of showers on the first afternoon and the second morning of the Test.

“We don’t look at the past. Whatever cricket game you play, you want to win, right? We never play any game to lose or just to compete or play for a draw. We want to play for a win. What has happened in the past, that’s all gone. We try to be in the moment. We want to try to be immersed in the moment and try to focus on the job at hand and try to give our best shot.”
India’s stand-in captain Jasprit Bumrah
Tags: Ben Stokes, England, England vs India, ICC World Test Championship, India, India tour of England, Jasprit Bumrah, Jonny Bairstow, Rohit Sharma, Virat Kohli