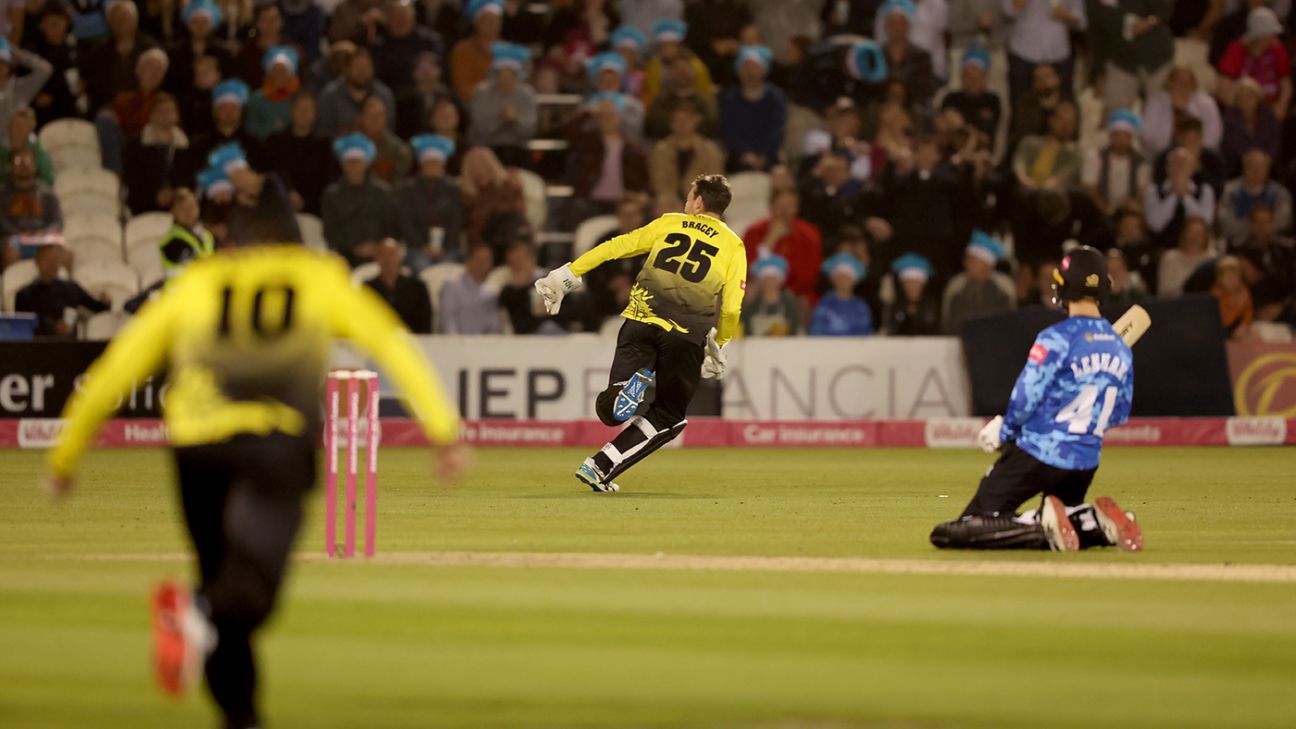 Gloucestershire 145 for 6 (Phillips 66, Taylor 46) beat Sussex 141 (Alsop 82, Payne 3-17, Chappell 3-19) by four runs
Gloucestershire’s bowlers produced a remarkable fightback at Hove, taking eight Sussex Sharks wickets for 23 runs in six overs to win by four runs and move up to third in the Vitality Blast South Group.
As well as their bowlers held their nerve, it was a spectacular collapse by Sussex, who were on course for a routine victory when they reached 118 for three in the 14th over, with Tom Alsop and Fynn Hudson-Prentice having added 69 in 53 balls and cruising towards their target of 146.
Alsop made a superb 82 off 52 balls, his second fifty in this season’s Blast in the week he made his move from Hampshire permanent, with eight fours and five sixes.
But when both he and Hudson-Prentice were both stumped off former Sussex left-arm spinner Tom Smith in the space of three deliveries, the innings went into an alarming tailspin.
The next five batsmen managed just 13 runs between them amidst some tight bowling and suspect shot selection under pressure. Suddenly, last pair Archie Lenham and Steve Finn needed nine off the final over, but David Payne held his nerve to seal victory with two balls to spare when Finn’s top edge gave James Bracey his fifth catch of the innings.
“I have played more than 400 games in T20 cricket and seen a lot of things so nothing really surprises me but I thought that was one of the worst performances I have ever seen,” Ravi Bopara, Sussex’s captain, said. “I’m not sure what happened, I can’t get my head round it.
“Moments like that can break teams but I won’t let that happen. We’ve still got half the tournament to play and it’s important that we’re back on it for those remaining six games.”
Gloucestershire had earlier recovered well in the second half of their innings thanks to a stand of 98 off 63 balls by New Zealander Glenn Phillips and Jack Taylor.
They had been 49 for 4 at halfway, but Phillips, who made an unbeaten 94 in the corresponding fixture last season, hit eight fours and two sixes in a 53-ball 66 only to fall in the final over when he dragged the ball onto his stumps off Obed McCoy.
Taylor, who offered good support with 36 off 31 deliveries, was run out by wicketkeeper Tim Seifert off the next ball trying to pinch the strike. Nonetheless, Gloucestershire would have settled for a total of 145 for 6 having struggled badly for momentum in the first half of their innings.
They lost three wickets in the powerplay, including Hammond off the first ball when he drove offspinner Harrison Ward’s first delivery in T20 – a full toss – to mid-off.
McCoy and Finn also struck with the first ball of their spells as Bracey feathered an edge to Seifert after being surprised by McCoy’s extra bounce and Ian Cockbain slapped a wide half-volley from Finn straight to point.
Left-arm spinner Delray Rawlins bowled superbly in the middle of the innings, conceding 13 in his spell and picking up Ryan Higgins who holed out to deep midwicket in the ninth over.
But Phillips hit leg-spinner Lenham for three successive boundaries to give the innings some momentum and his brace of sixes included one off the back foot off McCoy which was still climbing as it cleared the rope at midwicket.
Sussex’s reply began badly with Seifert lbw to Payne in the first over, and although skipper Ravi Bopara fell in the fifth over to Chappell, Sussex were 56 for 2 at the end of their powerplay.
Alsop certainly didn’t deserve to be on the losing side. One of his sixes was eventually given to him after TV replays determined that Phillips had stepped on the boundary cushion flicking the ball to Miles Hammond to complete the catch. He then cleared the rope for the fifth time off Smith, but later in the same over things started to unravel spectacularly for Sussex.
Tags: David Payne, Glenn Phillips, Gloucestershire, Gloucs vs Sussex, Jack Taylor, Sussex, Tom Alsop, Vitality Blast