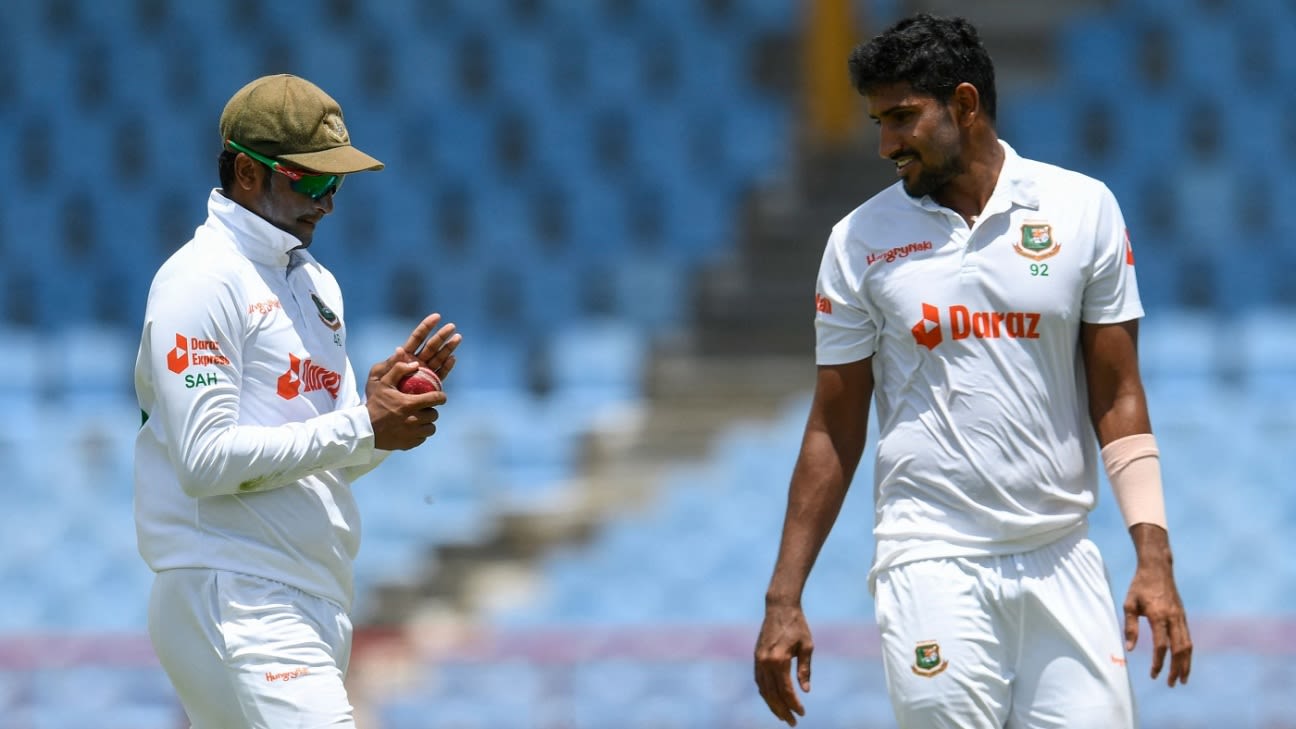 The disappointment wasn’t amiss in coach Russell Domingo’s voice after the end of the second day’s play. West Indies led by 106 runs after going up to 340 at stumps, but it was a far cry from being reduced to 132 for 4 shortly before lunch as the visitors were buoyant after inflicting a sudden batting collapse.
The home side lost four wickets for 32 runs, three of those for one run in the space of 12 deliveries. But Kyle Mayers and Jermaine Blackwood responded with a dominating 116-run fifth wicket stand that took the sting out of Bangladesh for the remaining two sessions. Mayers reached his second Test century while adding another 92 runs for the unbroken sixth wicket with Joshua Da Silva.
Domingo said that Bangladesh have been giving up similar great positions in the recent past, mostly due to their habit of trying to get wickets rather than doing what was working for them during a good time.
“It is the story of our Test match cricket at the moment,” Domingo said. “We are good for one session and then we have one really bad session. Guys were not patient. They couldn’t string together enough tight overs like we did in the first session. They were searching for wickets, bowled a few soft balls, came around the wicket when it should be over the wicket. They just made basic errors by not being patient enough. It was very disappointing the way we bowled after lunch.
Related
“The message is always to bowl dots, building pressure, stay in control of the run-rate. As soon as you go looking for wickets, you just bowl too many soft balls. Being patient, being disciplined are the sort of messages that we try to emphasize. We do it for one session but we can’t do it for another session.”
But the discussion went back to Bangladesh’s underwhelming first innings score of 234. They have failed to reach 300 runs in nine out of ten completed innings this year.
“There are some serious questions with bat and ball at the moment,” he said. “It was not a 230 all out wicket. If it weren’t for a 30-run partnership in the end, we would be 190 all out. We are just not good enough at putting performances together with the bat. West Indies are showing us why they are better than us. They have managed to build partnerships and withstand the pressure. They just bat long – that’s the bottom line.”
Domingo said that the Bangladesh batters should learn from the West Indies batters, particularly Mayers who has now scored two centuries in as many series, particularly when his team was in big trouble. “There’s a lot of players searching for form, searching for runs. The only way to get through it is to bat for long periods of time. Lot of 30s and 40s, the odd 50. Nobody is doing what Kyle Mayers is doing.
“His big 126 is the difference between getting 230 and 400. They chased down 400 against us in Chattogram. He got a 200. But we are not getting those big scores. It is a big lesson for the boys. Test match is hard. When you are not batting as well, teams will punish you,” he said.
Tags: Bangladesh, Bangladesh tour of West Indies, ICC World Test Championship, Russell Domingo, West Indies vs Bangladesh