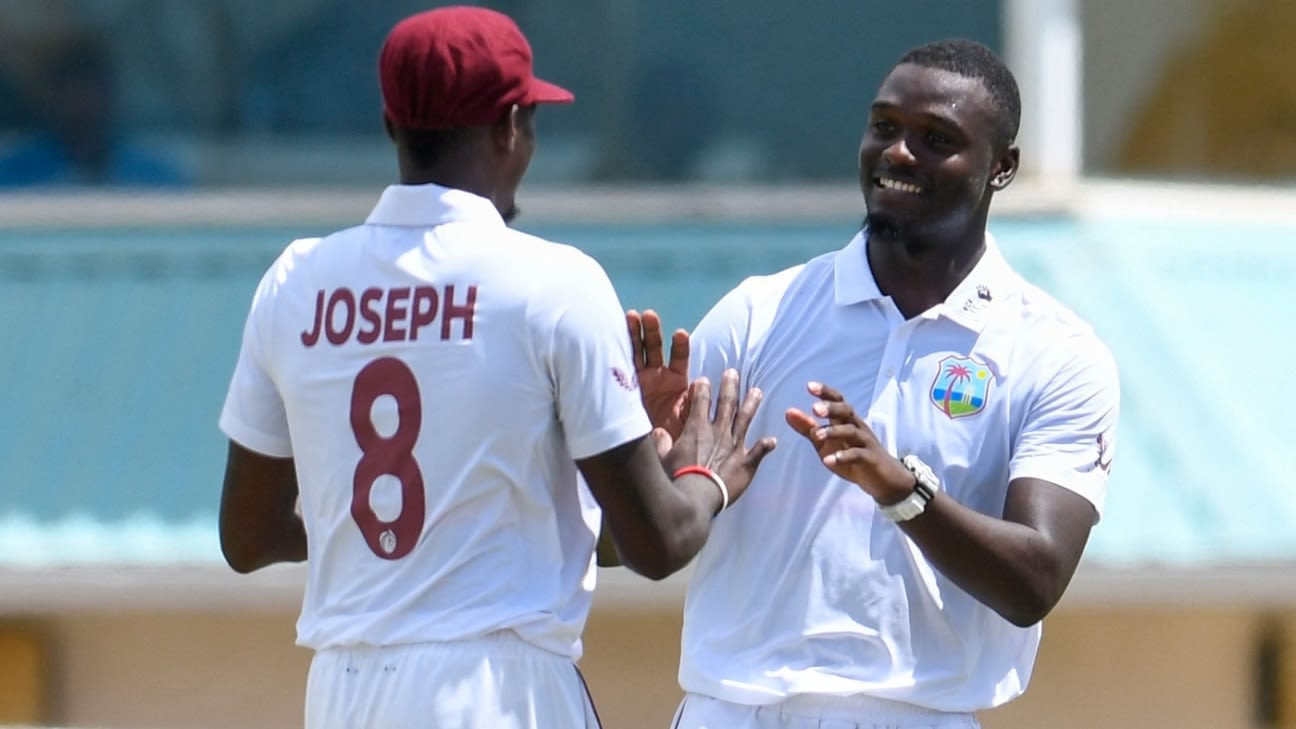 West Indies 67 for 0 (Campbell 32*, Brathwaite 30*) trail Bangladesh 234 (Litton 53, Tamim 46, Joseph 3-50, Seales 3-53) by 167 runs
Bangladesh showed progress in making 234 against West Indies after being forced to bat first in the second Test at Daren Sammy Stadium on Friday. It was a marked improvement from their 103 all-out in the first innings of the first Test in Antigua, where they lost with almost two days to spare.
West Indies’ class was still on show on Friday when they reached stumps at 67 without loss. Openers John Campbell and Kraigg Brathwaite were unruffled in making 32 and 30 respectively.
Anderson Phillip, given his Test debut in place of Gudakesh Motie, earned the first wicket with his second delivery when he bowled Mahmudul Hasan Joy for 10.
Tamim Iqbal looked like he had his eye in while hitting nine boundaries for 46, but he was rooted to the crease while poking at Alzarri Joseph and was caught in the covers.
Related
Anamul Haque, who last played a Test eight years ago at the same ground, was developing a good partnership with Najmul Hossain Shanto until they were rapped on the front pads by Phillip and Kyle Mayers respectively, and lost reviews. Anamul made 23 while Shanto scored 26.
Captain Shakib Al Hasan soon edged Jayden Seales onto his stumps on 8, and Nurul Hasan was caught behind on 7 after Joseph glanced his glove.
Bangladesh were 159-6 at tea with Litton Das settled in, but as soon as he reached his 14th Test fifty, he was dismissed by Joseph on 53.
The tourists passed 200 thanks to tailenders Shoriful Islam, who hit five boundaries off Roach for 26, and Ebadot Hossain, who was 21 not out.
Seales and Joseph claimed three wickets each with Phillip and Mayers two each.
Campbell and Brathwaite showed there were no tricks in the pitch when they scored at more than four an over in 16 overs to reduce the deficit to 167 runs.
Tags: Alzarri Joseph, Bangladesh, Bangladesh tour of West Indies, ICC World Test Championship, Jayden Seales, Litton Das, West Indies, West Indies vs Bangladesh