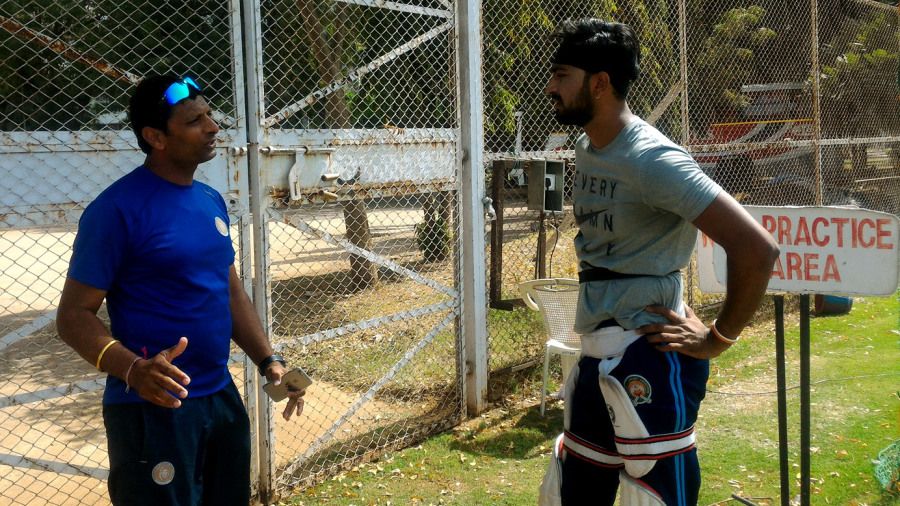 National Cricket Academy coaches Sitanshu Kotak, Sairaj Bahutule and Munish Bali will be part of India’s support staff, which will be led by VVS Laxman, on the short tour of Ireland later this month.
Kotak, who accumulated 8061 first-class runs for Saurashtra in a career spanning two decades, was part of the India A support staff during their tour of South Africa in November-December 2021. Bahutule, one of the most successful spinners in Ranji Trophy history with 630 first-class wickets, was bowling coach of the India Under-19 side that won the World Cup in the Caribbean in early 2022. Bali was also with them, as fielding coach.
Laxman will be India’s head coach during their two-match T20I series in Ireland, filling in for Rahul Dravid, who will instead be in England to oversee the team’s preparation for the rescheduled fifth Test from the tour last year as well as the limited-overs series. With Dravid and the other senior support staff members set to depart for England with the Test squad later this week, the trio of Bali, Kotak and Bahutule has already joined the T20I squad that is currently playing South Africa at home.
Laxman is currently the director of cricket at the National Cricket Academy in Bengaluru, a position he has been in since being appointed last year following Dravid’s elevation as head coach of the national team. He has earlier been involved in coaching capacities with Sunrisers Hyderabad in the IPL and Bengal in the Indian domestic circuit as a batting consultant. Earlier this year, he was part of the support staff group with the India Under-19 World Cup-winning team in the Caribbean.
There will also be a clash of dates between India’s T20 warm-up games in England – against Northamptonshire and Derbyshire – and the Edgbaston Test, so there is a possibility of Laxman being with the team during those games as well.
India’s Test specialists are likely to leave for England on June 15. The Birmingham Test had been pushed back following a Covid-19 outbreak in the Indian camp last year.
Tags: India, India in Ireland, Munish Bali, Sairaj Bahutule, Sitanshu Kotak, VVS Laxman