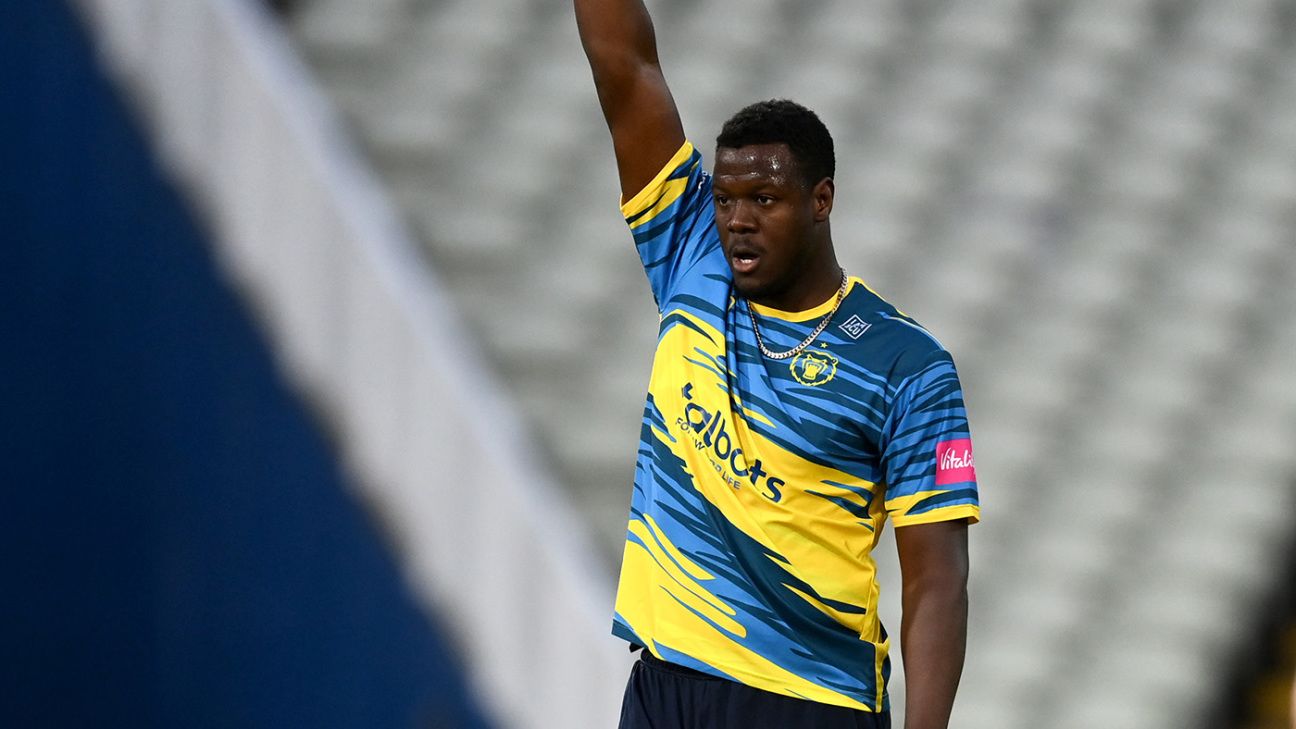 Carlos Brathwaite, the Birmingham Bears captain, was accused of “reckless” behaviour during his side’s seven-wicket defeat against Derbyshire in the Vitality Blast on Sunday, after being hit with five penalty runs for throwing the ball at the opposition batter, Wayne Madsen.
The incident occurred in the 13th over of Derbyshire’s chase at Edgbaston, when Madsen attempted to take a run, but turned back quickly as Brathwaite picked up the ball in his follow-through. The Bears’ captain instinctively threw the ball to break the stumps but instead hit Madsen’s bat handle, with the ball deflecting away for an overthrow.
Brathwaite raised his hand straightaway to apologise to Madsen, indicating it was not intentional. His opponent, however, was unimpressed, immediately gesticulating towards the square-leg umpire, Ben Debenham, before being called through for the run. Brathwaite, meanwhile, was seen complaining to the standing umpire, Steve O’Shaughnessy, that his shy had been a reaction to Madsen stepping out of his crease initially, but after a consultation between the two umpires, he was overruled.
Brathwaite was ultimately penalised for a Level 2 offence under the MCC Laws pertaining to ‘Unfair Play’, and Derbyshire, on 111 for 1 at the time of the incident, were awarded five extra runs in a 160-run chase that they eventually completed with 11 balls to spare.

Not ideal for Carlos Brathwaite

A 5-run penalty was given against the Bears after this incident…#Blast22 pic.twitter.com/pXZLGcEGYa

The wording of Law 42.3.1 deals with incidents of “throwing the ball at a player, umpire or another person in an inappropriate and dangerous manner”, although the same rule is not part of the playing conditions in international cricket and other franchise T20 tournaments such as the IPL.
In international cricket a similar action would earn the bowler a demerit point along with a potential monetary penalty. In the IPL, a player would be handed a monetary penalty along with a code of conduct warning. However the Blast and the PSL have adopted the MCC ruling and so Brathwaite and his team had to grin and bear the penalty.
“The umpires deemed Carlos Brathwaite’s throw reckless and that is what it was,” Madsen told the ECB Reporters Network afterwards. “I was in my crease and he didn’t even look. I know it’s a competitive game but if that had hit me on the back of the head, like the umpires said, there is real trouble. Because I was back in my crease before he had even released the ball, it was a bit reckless.”
It has been an eventful Blast for Brathwaite. On Friday, he picked up a three-wicket haul to help Birmingham defend the highest total in Blast history, against Nottinghamshire at Trent Bridge. And it was also against Notts that Brathwaite decided to retire out during the teams’ first meeting in a rain-reduced match earlier in the month.
Recognising that Notts had decided to bowl legspinner Calvin Harrison in the final over of a match that had been reduced to eight overs, Brathwaite called for the in-form Sam Hain, a decision that ultimately had no bearing on his team’s one-run win, but which Notts’ coach Peter Moores told ESPNcricinfo was “selfless”.