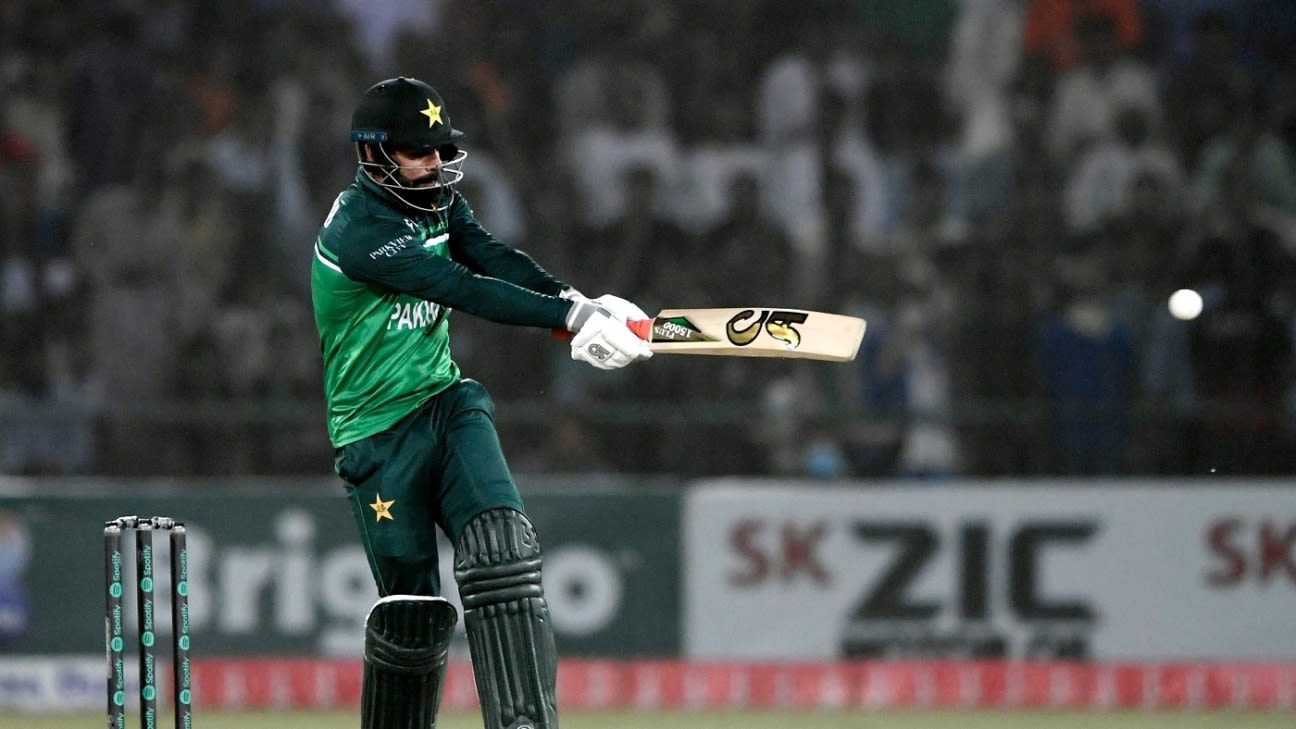 48 overs Pakistan 269 for 9 (Shadab 86, Imam 62, Pooran 4-48) beat West Indies 216 (Hosein 60, Shadab 4-62, Hasan 2-29) by 53 runs
A sensational all-round performance from Shadab Khan sealed a commanding 53-run win for Pakistan, and a 3-0 series win to give their World Cup qualification hopes a major fillip. The 23-year old came in with the hosts in a spot of bother at 117 for 5, serving as both anchor and slogger through various stages of the second half of the innings, before a four-wicket haul with the ball brought the visitors down.
The 269 that Pakistan put up in the first innings might briefly have seemed like a few runs short when West Indies began brightly, but in the absence of in-form middle-order batters to shepherd the innings through, they found the Pakistan bowlers a touch too good to handle.
For once, Pakistan lost the top order early despite an 85-run opening stand between Fakhar Zaman and Imam-ul-Haq. It thrust significant responsibility on the middle order, with Shadab Khan stepping up to the mark, as his 78-ball 86 helped Pakistan to a defensible 269.
West Indies captain Nicholas Pooran was the surprise architect of the hosts’ middle-order collapse, getting significant spin and bounce as his first four ODI wickets left Pakistan tottering at 117 for 5. The game was also suspended by an unexpected dust storm on a hot day in Multan, leading two overs being sliced off the contest.
Pakistan chose to bat first, with a more cautious Zaman prioritising time at the crease over his trademark truculence. The first third of the innings was spent with the two turning the strike over and minimising risk, and aside from an early drop from Shai Hope that reprieved Imam, the openers looked fairly comfortable.
Pooran, who had before today bowled just three balls in ODI cricket, brought himself on, and in his third over, yorked Fakhar to provide his side the breakthrough. Following that, Hayden Walsh Jnr stunned Multan next over by trapping Babar Azam in front, with a successful West Indian review sending him back for 1.
Three further quickfire strikes from Pooran – including two in three balls – dismissed Imam, Haris and Mohammad Rizwan, as Pakistan suddenly looked vulnerable to being bowled out early.
But Shadab and Khushdil Shah strung together an 84-run partnership, coming either side of a dust storm that briefly reduced visibility at the ground to almost none. When the players returned, the sixth-wicket pair upped the tempo, and though Khushdil never quite moved into top gear as he is so lethally capable of, it was Shadab who was having the more telling impact on the innings.
Akeal Hosein tried to keep West Indies alive, before Shadab had him stumped•PCB
And when Akeal Hosein breached Khushdil’s defences, the responsibility on Shadab only rose; and so did he to the occasion.
He brought up his half-century the following over, shepherding the strike with the responsibility of a frontline batter and the artistry of a modern death-overs game management specialist. Shadab found regular boundaries, and for a brief time, might have entertained thoughts of a maiden international hundred before a perfect yorker breached his defence as he tried to lap it over fine leg.
However, by then he had 86, and against a West Indies batting line-up reeling from the second game, Pakistan took momentum with them at the halfway mark.
In the absence of Shaheen Afridi, Pakistan’s new-ball attack carried an intrigue in itself, and debutant Shahnawaz Dahani swiftly delivered. After a breezy start from West Indies, Dahani drew Kyle Mayers into a slash that found Imam at point. Soon after, Shamarh Brooks was coaxed into chopping one on to his stumps.
At the other end, the luckless Hasan Ali took a wicket, only for the third umpire to find he had overstepped. But he wouldn’t be denied for long. A hook from Shai Hope found Khushdil sprinting across the boundary to pluck one out of thin air, giving Hasan a wicket his confidence sorely needed.
West Indies had a few partnerships midway, but Pakistan kept stubbing them out before they became any kind of menace. Shadab was the chief architect of this kind of preemptive strike. Keacy Carty was undone by a gem of a legspinner that Mohammad Haris behind the stumps was quick to react to, catching the batter out of his crease, while a loose shot from Rovman Powell found Zaman at long-off.
The only reason Pakistan might have had to put their victory celebrations on hold was a feisty counterattack from Hosein, who breathed some hope into the West Indies camp when he smashed Mohammad Nawaz for two sixes in an over.
Shadab was smashed for one too off the first ball of the next, but he wouldn’t be kept quiet for long, coming back to deceive him with a wrong’un, with Haris reacting sharply behind the stumps once more to whip the bails off.
That knocked the stuffing out of the West Indies side, who, despite enjoying plenty of success in phases of play this series, never really did enough to merit an outright win on the tour. Pakistan managed to cash out in the heat, while with World Cup qualification becoming an uphill task, West Indies found themselves left out in the cold in Multan.
Tags: Akeal Hosein, Nicholas Pooran, Pakistan, Pakistan vs West Indies, Shadab Khan, West Indies, West Indies in Pakistan, World Cup Super League