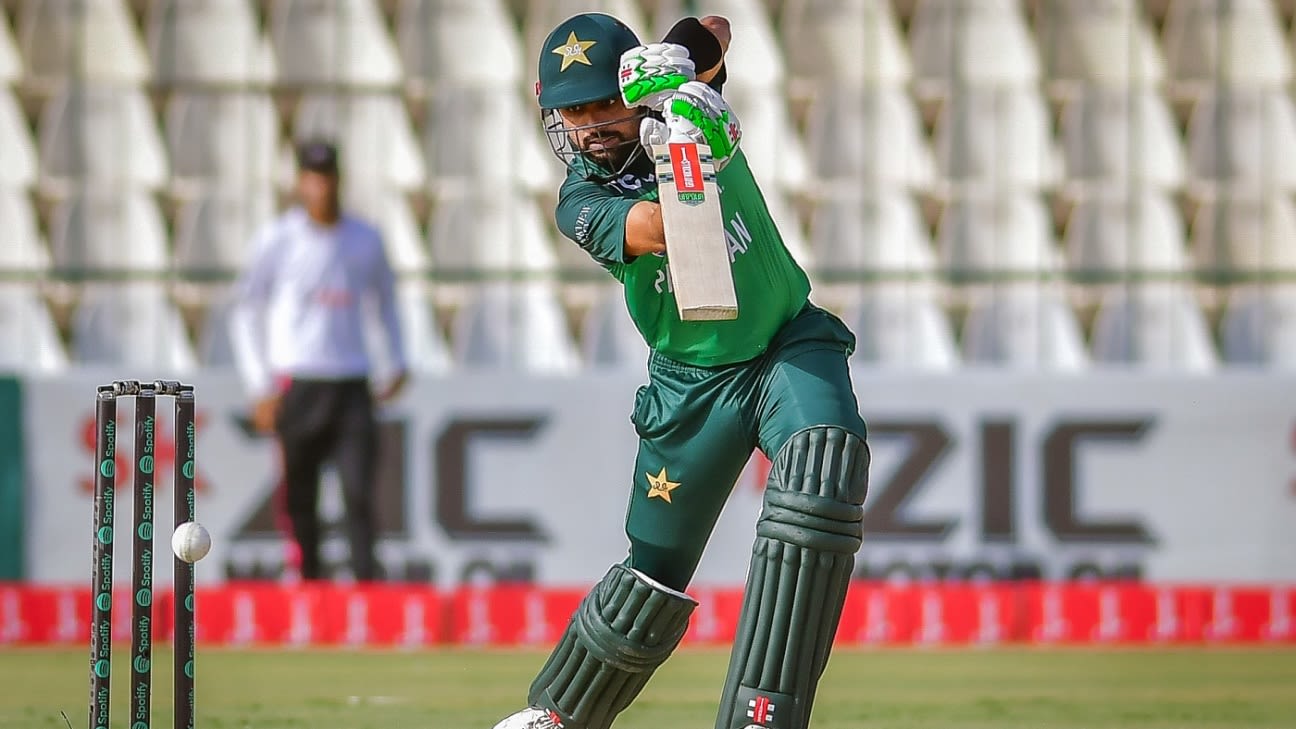 It wasn’t a particularly easy series for Pakistan to play. Not just because of how hot it was, which everyone including captain Babar Azam, acknowledged, but also because there were limited gains to be made across the three games against the West Indies this week. It was a series that was put off last December, and had to be fitted in somehow – not unlike a family commitment – because of the Super League points on offer that both sides rather desperately coveted.
For Pakistan, anything less than a 3-0 win against a side that last won an away ODI series against a Full Member in 2011, would have been received as a disappointment. And even when the series was wrapped in in that fashion, the reaction is more a banal shrug than unbridled joy. The temptation to focus on the weaknesses is always there, and for this side, there are still a few to be ironed out.
That is no mindset to be in, however, if you’re the captain of Pakistan. “We’re performing well in all three departments,” Babar said. “And we had different individual performances to win us the games. The unity in the side starts with the dressing room and we have to give our players belief. I give our best 15 confidence, and the best 11 gets a full opportunity. A player always wants to get a proper chance and be used correctly, and when they are the unity increases. Our team always sticks together, on and off the field, and that is the secret to our success.
Related
“We talked about how we needed to play different cricket. And we have played proactive, positive cricket, People said we couldn’t chase 350. We did [against Australia], and our bowling also defended totals. Ups and downs are natural. You don’t always get a result even if you give 100%. Sometimes you have to accept that what you do can’t be executed the way you wanted. I can only keep demanding effort from my team. They’re doing that, and so the results are following.”
Pakistan have now won five ODIs in a row, and come up trumps in five of the six series they have played in since the previous World Cup. While some key positions still require reinforcement – notably the middle-order and the fast-bowling combination – Babar saw that as a positive of sorts and was confident someone would step up eventually.
“Bench strength always gives you a lift,” he said. “Knowing you have players on the bench who are ready to use is good to know. We had Iftikhar, Abdullah Shafique and Dahani on the bench. We tried a different bowling combination and they performed very well. It’s very satisfying as a captain to see that.
“We still need to improve in certain areas. We still lose wickets in clusters in the middle which puts us on the back foot. Here the players need better concentration; it’s an area to work on. The fielding has improved, but our body language still deteriorates when a good partnership develops, and it’s another thing we can try and improve.”
But ultimately, Babar was keen to just live in the present, and emphasised his gratitude towards the Multan crowd that had turned up despite unrelenting heat.
“I did not expect such huge support from the Multan crowd, to be honest. They supported both teams despite the heat – and it was very, very hot. But they showed their interest. Multan’s people wanted cricket here, and they showed how badly they wanted it and how much they enjoyed it. They supported both teams, and I’d like to thank them for it I was glad to see that as Pakistan captain and our team enjoyed that tremendously.”
Tags: Babar Azam, Pakistan, Pakistan vs West Indies, West Indies in Pakistan, World Cup Super League