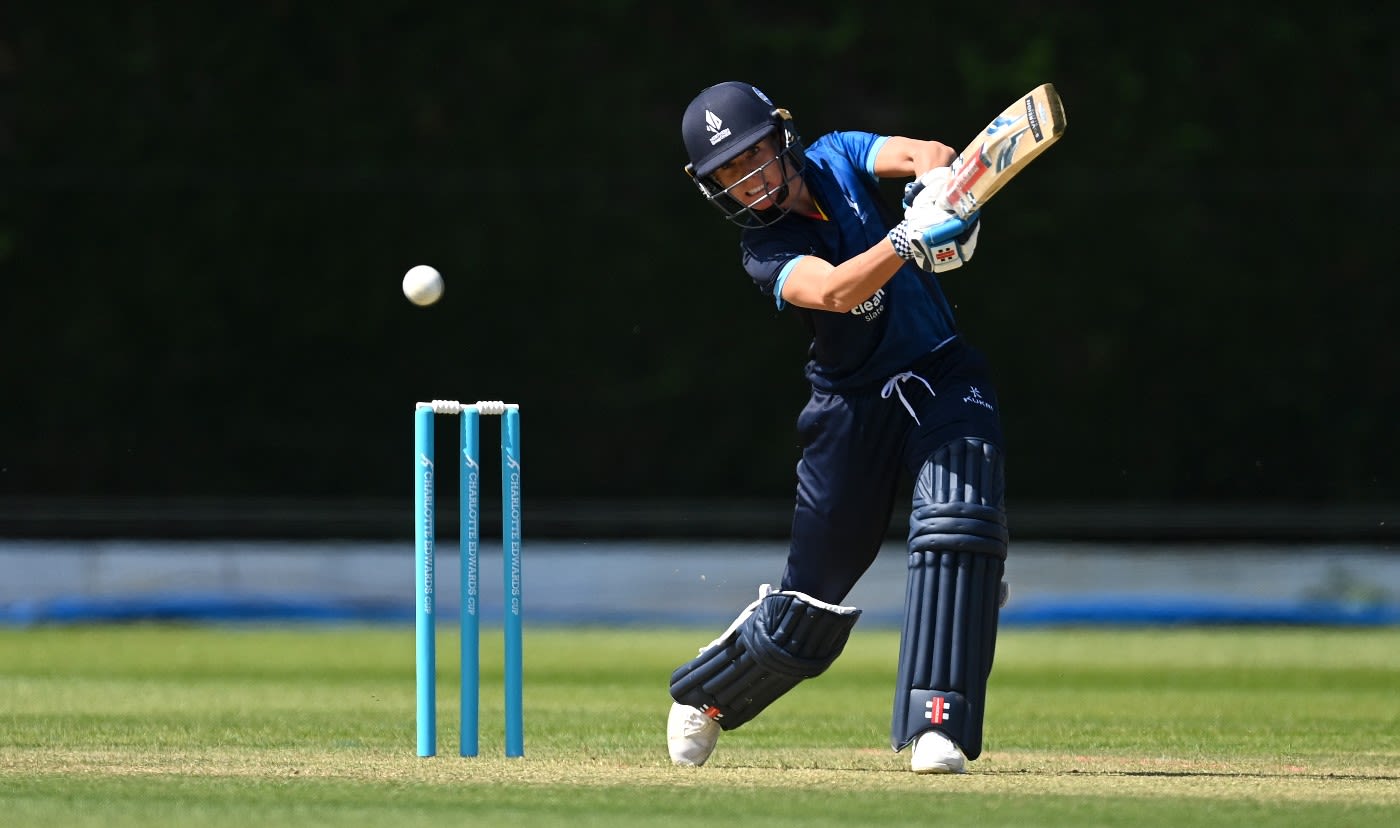 Northern Diamonds 241 for 4 (Winfield-Hill 93, Heath 51*, Armitage 47) beat Thunder 235 for 7 (Lamb 82) by six wickets
A brilliant 93 from England international Lauren Winfield-Hill saw Northern Diamonds begin their Rachael Heyhoe Flint Trophy campaign with a six-wicket win over rivals Thunder.
Alongside Hollie Armitage, who hit 47, and Bess Heath, who struck an unbeaten 51, Winfield-Hill ensured the target of 236 was easily chased down with 46 balls remaining, despite the efforts of Thunder’s Emma Lamb, whose 82 was as equally entertaining as that of her rival opening batter.
At the start of the day Diamonds had made an early breakthrough when Georgie Boyce was trapped in front by Rachel Slater for six with the dismissal bringing the imposing figure of West Indies star and new Thunder signing Deandra Dottin to the crease.
Unsurprisingly Dottin’s introduction saw the run rate rise dramatically as she hit three successive boundaries off one Katherine Brunt over with Lamb proving equally dominant at the other end.
The second-wicket pair had added 55 runs in just over seven overs when Dottin attempted one shot too many and skied a Katie Levick delivery to Leigh Kasperek at deep cover for an entertaining 26 off 27 balls.
Deandra Dottin made her first appearance for Thunder•Lancashire Cricket
From then on it was all about Lamb, as the England international unleashed an array of attractive strokes on her way to a fine half-century which saw her bring up 2,000 List A runs when she reached 62.
Along the way both Ellie Threlkeld (13) and Danielle Collins (18) offered valuable support until they were dismissed by the spin of Linsey Smith and Kasperek respectively.
So comfortable had Lamb looked it was something of a shock when she handed Smith her second wicket after she misjudged the flight of a full delivery and was bowled attempting a hit across the line.
Lamb’s dismissal prompted a stalling of the run rate with Jenny Gunn’s accuracy adding to the economy of Diamonds’ spin attack as Thunder struggled to hit the boundaries during the crucial middle overs.
But while the runs dried up, Shachi Pai and Daisy Mullan stood firm and added 31 for the sixth wicket until Mullan was brilliantly caught in the deep by Heath off Levick for 18.
Pai finished unbeaten on 41 and some eager running between the wickets took Thunder to a competitive 235 for 7 at the close of the innings with Levick and Smith the pick of the bowlers.
Until well into the second half of Diamonds’ reply the result of this game never looked in doubt despite the early departure of Smith for nine after she top-edged a pull shot to Laura Jackson.
Related
The reason was Winfield-Hill, who has not played for England since she was dropped two matches into the World Cup in March. Danni Wyatt, who replaced her at the top of the order ahead of England’s run to the final, and Lamb, who opened alongside Tammy Beaumont in last week’s Test against South Africa, were retained in the ODI squad for three upcoming fixtures with South Africa starting on July 11.
Here Winfield-Hill utterly dominated Thunder’s bowling as she constructed a match-defining partnership with Armitage in a chanceless knock that saw her stroke the ball around Sale’s small ground with finesse and power as Thunder’s attack wilted and their fielding became ragged.
The partnership was eventually broken after 116 runs when Armitage’s late cut off Jackson found Hannah Jones at fly slip and she departed for 46 before Winfield-Hill fell soon after to the left-arm spin of Alex Hartley when she skied a drive to Georgie Boyce at long off for a brilliant 93.
When Yvonne Graves departed without scoring, bowled by Jones, Thunder had a glimmer of hope, but it was soon extinguished as Sterre Kalis and Heath steered Diamonds home.
Winfield-Hill was pleased with her performance but played down talk of competition between her and Lamb for an England place while welcoming the addition of Dottin to the tournament.
“People have said about the rivalry between me and Emma but you can’t really think like that,” Winfield-Hill said. “I’m really good mates with her and I’m pleased for her. I like talking to her about batting and I’m not tunnel vision or dog eat dog when it comes to playing for England. I like to see my friends and my team-mates do well and she’s played really well again today.
“I caught wind of the fact Deandra might be playing this week and I said to my wife I thought it was brilliant – you have to look forward to having a world class-player coming up against you. I was really excited about the prospect of our bowlers coming up against her because that is how you get better. Bowlers have to take a deep breath and be resilient but you want world-class players playing in this country.”
Ellie Threlkeld, Thunder captain, said: “Emma’s batting was outstanding and Shachi Pai too – we’ve spoken a lot about how to finish innings off and she did that brilliantly.
“I loved the way Deandra went about her batting today and she just brings so much to our group with her knowledge and her experience. She’s really good at all three disciplines so it’s like signing three players – she was brilliant and hopefully this is just the start.”
Tags: Bess Heath, Deandra Dottin, Emma Lamb, Hollie Armitage, Lauren Winfield-Hill, Northern Diamonds, Rachael Heyhoe Flint Trophy, Thunder, Thunder vs Diamonds