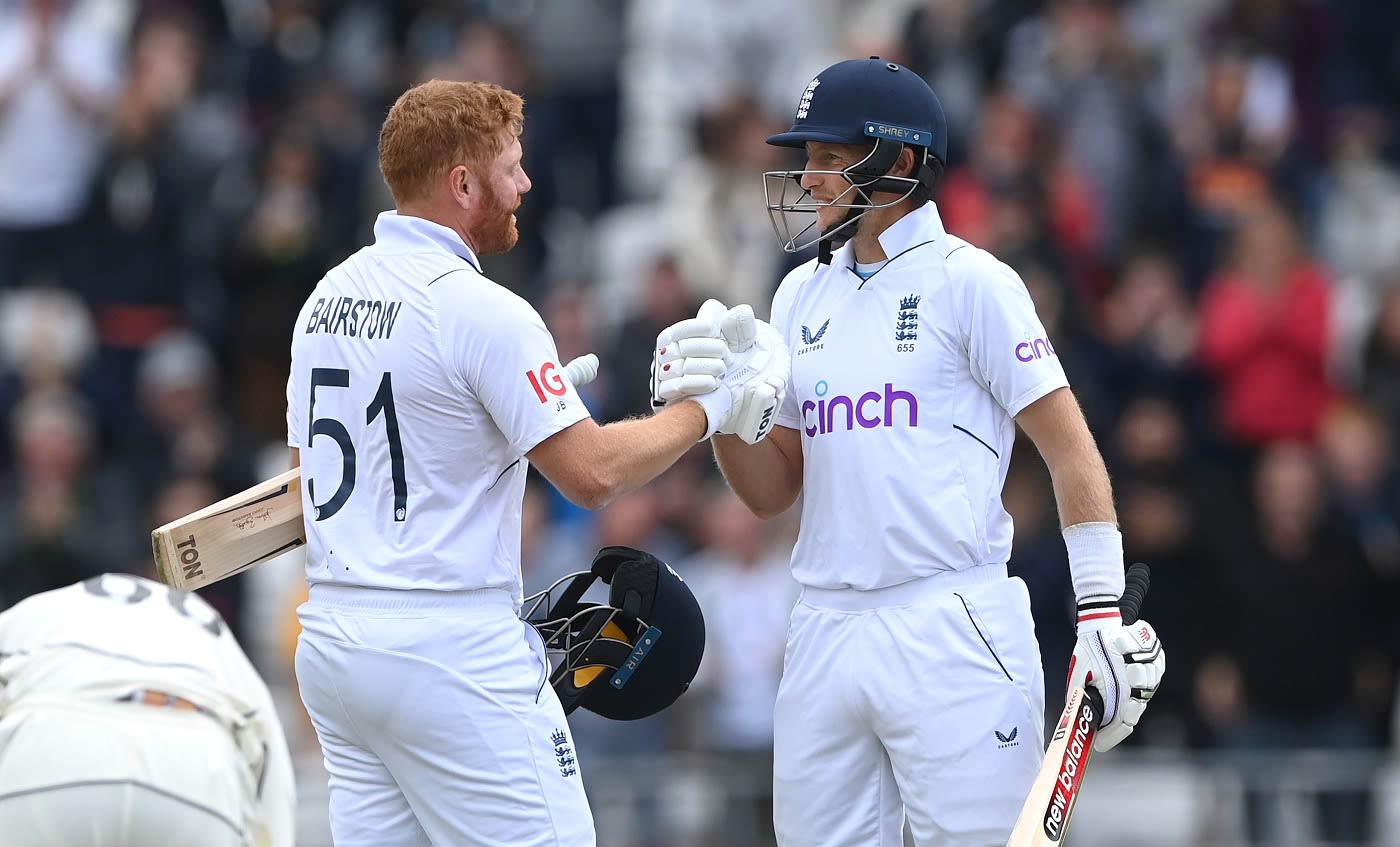 England 360 (Bairstow 162, Overton 97, Boult 4-104) and 296 for 3 (Root 86*, Pope 82, Bairstow 71*) beat New Zealand 329 (Mitchell 109, Blundell 55, Leach 5-100) and 326 (Blundell 88, Latham 76, Mitchell 65, Leach 5-66) by seven wickets
Jonny Bairstow came barrelling out of the dressing-room with the impatience of a man who’d endured a two-and-a-half-hour rain delay, as he and Joe Root rampaged to a 3-0 series win on the final afternoon at Headingley in just 15.2 overs of pedal-to-the-metal action.
For the third time in as many matches, a supposedly daunting target – 296 on this occasion, compared to 277 at Lord’s and 299 at Trent Bridge – was hunted down with preposterous haste. Bairstow, following back-to-back centuries in his previous two innings, rushed along to a 29-ball fifty, England’s second-fastest in Tests, and by the time he ran out of road on 71 not out from 44 balls, he’d chewed up Root’s chances of emulating Daryl Mitchell’s feat of centuries in each of the three Tests.
It says something for England’s current mood that even a score of 86 not from 125 balls is no longer enough to dominate a stiff run-chase, not even when that includes another variation on Root’s ramp stroke, this time a deflection for four through fine leg. Root, of course, will not care a jot for that, and as he and Bairstow raced to a seven-wicket victory with a 111-run stand from just 87 balls, he was able to reaffirm his own majestic vein of form with a final series tally of 396 runs at an average of 99.
Bairstow, however, almost managed to lap Root’s tally despite a relatively standing start. After scores of 1, 16 and 8 in his first three innings of the series, he has gone into world-beating overdrive in his last three visits to the crease – 369 runs from 293 balls, including 46 fours and ten sixes. Root, however, was later named as England’s Player of the Series – a reflection of the huge stature he brings to this team as the undisputed No.1 batter in the world.
After a murky morning of rain all across Leeds – and an early lunch – the contest resumed with manic impatience. Tim Southee scalped Ollie Pope with his fifth ball of the day, an ominously pinpoint seamer that zipped back off the deck to pluck out his off stump and deny the batter his second hundred of the series. Pope fell having added a solitary run to his overnight 81.
But if England might ordinarily have responded to such excellence with respect, Root and Bairstow opted instead for contempt. Trent Boult has been the outstanding seam bowler on either side this series, but his first over of the day was slashed for 17 – back-to-back cuts from Root, notwithstanding a zippy first ball that climbed from a good length, and consecutive deflections from Bairstow, off the pads and through third man, with his white-ball nous coming to the fore.
That, frankly, was the end of the day as a contest. Though Southee in particular continued to challenge the edge with his conventional skill in seaming conditions, England’s determination to keep accelerating through the threat was extraordinary. Bairstow belted Boult for another four through point, and when he extended his arms through a Southee length ball to launch him back over his head for six, he’d romped along to 21 from his first 12 deliveries.
With 66 runs left to defend, Kane Williamson turned back to his spinner, Michael Bracewell, who’d been ransacked for 70 runs in 11 overs on day four, and Bairstow greeted him with a sweep for four through square leg. One over later, he drilled a straight six so fast and flat that it ended up wedged between two seats in the Football Stand.
Bairstow biffed along to his fifty with another dismissive drive through mid-on off Southee, and when New Zealand burned their final review on a catch that was shown to have looped off his forearm, he barely paused for reflection. Bairstow secured a fitting end with back-to-back boundaries off Bracewell, a chop off the back foot for four then a muscular mash high over wide long-on for the series-sealing six.
It was left to Stokes, surplus to requirements in the chase, to raise the series trophy after England’s first 3-0 series sweep since the tour of Sri Lanka in 2018-19, and their most dominant home series scoreline since beating India 4-0 in 2011.
“When I took over this job, it was more than results for me,” Stokes said. “It was about changing the mindset of the lads towards Test cricket, about having fun, and enjoying the fact that you’re out there representing your country, and the results look after itself.
“But to say that we’ve done it so quickly is just unbelievable,” he added. “To walk away with a 3-0 series win over the best team in the world is a pretty special start. I’ve got to show a huge amount of testament to the team over these three games. They’ve been absolutely phenomenal.”
Tags: England, England vs New Zealand, Joe Root, Jonny Bairstow, New Zealand, New Zealand in England