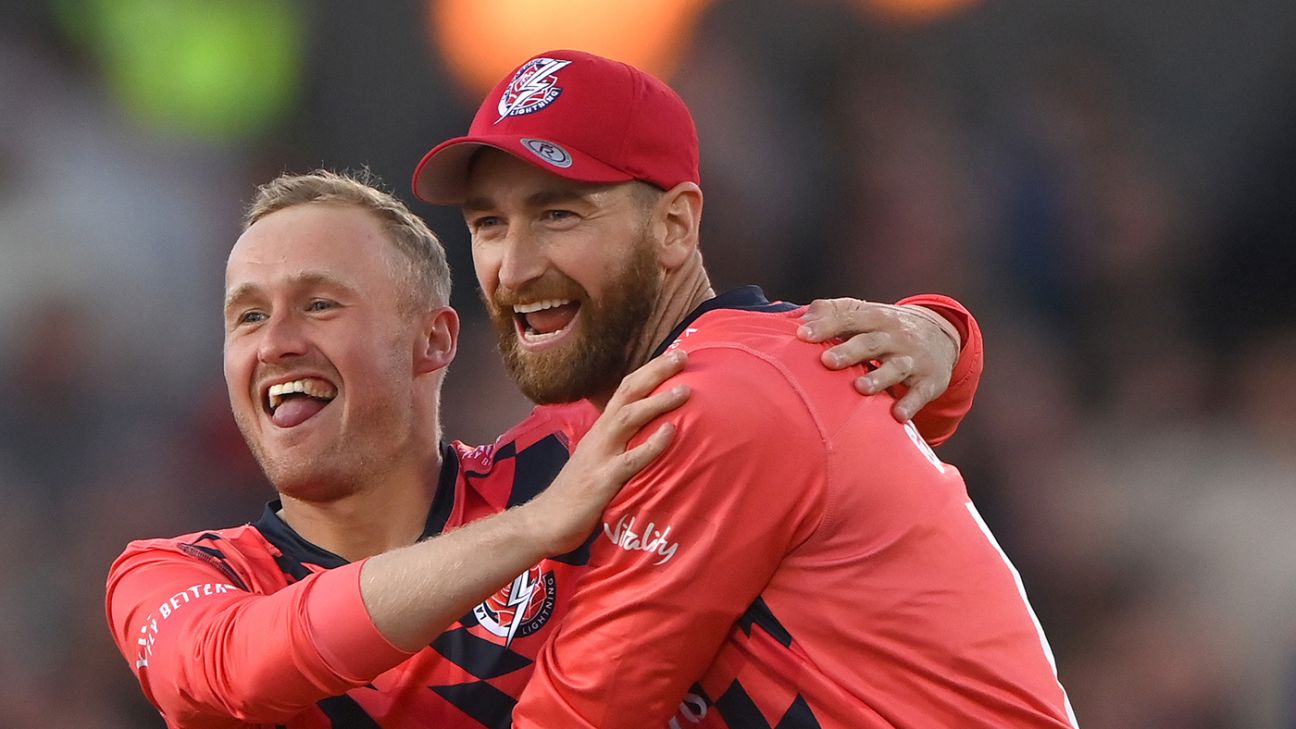 On Thursday afternoon, Richard Gleeson saw a WhatsApp notification pop up on his phone. Matthew Mott, England’s white-ball coach, had sent him a message saying, “I’m going to give you a ring.” Gleeson turned to his wife, Laura, and said, in a state of shock: “I think I’m about to get picked for England.”
He was right. Gleeson, an uncapped 34-year-old seamer, has been named in England’s 14-man T20I squad to play India next week and with three games in four days putting heavy demands on their seamers, he is highly likely to make his debut. It would be the crowning moment of an improbable comeback story: only eight months ago, he wondered if he would ever play professionally again.
Gleeson is one of the game’s late developers. For most of his adult life, he played club cricket for Blackpool and minor counties for Cumberland and became a coach at the Lancashire Cricket Board after a series of unglamorous jobs. At 27, he was trialling with Northamptonshire and earned a first-class debut against the touring Australians; the following year, on a pay-as-you-play deal, he was a key man in their T20 Blast title-winning side.
Related
His ability to bowl yorkers at good pace made him stand out and his upwards trajectory continued. He played for the England Lions in early 2018, moved to Lancashire at the end of that season and appeared in the Bangladesh Premier League, the Big Bash and the Abu Dhabi T10. When England needed standby bowlers for their white-ball squads in the Covid summer of 2020, he travelled to the Ageas Bowl as a reserve.
But when he returned to Lancashire, things started to unravel. On the morning before a four-day game, he felt a sharp pain in his lower back – “absolute agony, like being stabbed repeatedly” – and scans diagnosed a stress fracture, caused in no small part by the first lockdown of the pandemic which had left him unable to train.
His back was effectively being held together by a single piece of cartilage and he spent the whole winter in rehab, working his way back to fitness. The following summer, he played the first game of the Blast, conceded 21 runs in his only over, and could barely move the next day due to the pain of bowling. He returned for the quarter-final defeat against Somerset but was only “around 70% healed” and was again expensive.
Gleeson went for another scan in December, knowing that bad news would probably prove terminal for his career. After all, his contract with Lancashire had already expired: “I was basically unemployed for two months,” he recalls. “I didn’t know what was going to happen – or if I was going to play cricket again. That thought had definitely crept into my mind.
“But when I had the scan, the fracture was 100% united, which the specialists had said was the best-case scenario.” Lancashire offered him another contract, initially just for the T20 Blast. “There were no guarantees that I’d get back out on the park and it could be that if I bowled again it would flare up, so it was almost like a suck-it and-see-contract.”
In fact, that contract expires in two weeks’ time – but there are no longer the same concerns about whether another will follow. After taking 20 wickets in 12 games in the Blast this year, the joint-most by an England-qualified bowler, Gleeson hopes to win a contract in next week’s wildcard draft for the Hundred, and will soon sit down with Lancashire to discuss his future. But first, he has an England series to think about.
England have generally used slower-ball bowlers at the death in short-form cricket of late, but are looking at Gleeson as an old-school, yorker option who can hit the blockhole more often than not. “The one area in our white-ball stuff where we’re looking for options is at the death,” Jos Buttler, England’s new captain, said on Friday.
Gleeson is the joint-leading wicket-taker in the Blast this summer•MI News/NurPhoto via Getty Images
“He bowls some excellent yorkers and watching him in the Blast this year, he’s bowled brilliantly. It was quite an easy selection… everyone was unanimous on that. We certainly see that death-bowling area as somewhere he can use his expertise.”
Gleeson has thrived at the death in the Blast, closing out a tie and a one-run win in the two televised Roses games, while against Durham he took a superb 4 for 19, with all four wickets clean bowled.
“Obviously if you do things on TV, it gets people talking,” he says. “I’ve had the responsibility of bowling in the powerplay and at the death and I relish the big moments. Dane [Vilas] has entrusted me with that responsibility with Saqib [Mahmood] being out.
“I think I’ve done quite well and stepped up to it. If I’m nailing my yorker, it’s obviously a difficult ball to get away, no matter what time of the game. That’s been a big part of it, but you have to be clever with it as well and use it at the right time.”
And he has thrived this season while juggling his new commitments at Myerscough College in Preston, where he has been teaching a BTEC cricket course. He has even had to ask for “a little bit of leave” after his England call-up to miss a CPD (Continuing Professional Development) training day which clashes with the India series.
He has taken an unusual route but next week, Gleeson will find himself bowling to some of the biggest names in cricket in Rohit Sharma, Virat Kohli, Rishabh Pant and Hardik Pandya. His outlook is simple: “They’re all human, at the end of the day. I’ll just go out there, relish it and do the same thing I have all season. If it’s good enough, it’s good enough.”
Tags: England, India in England, Richard Gleeson