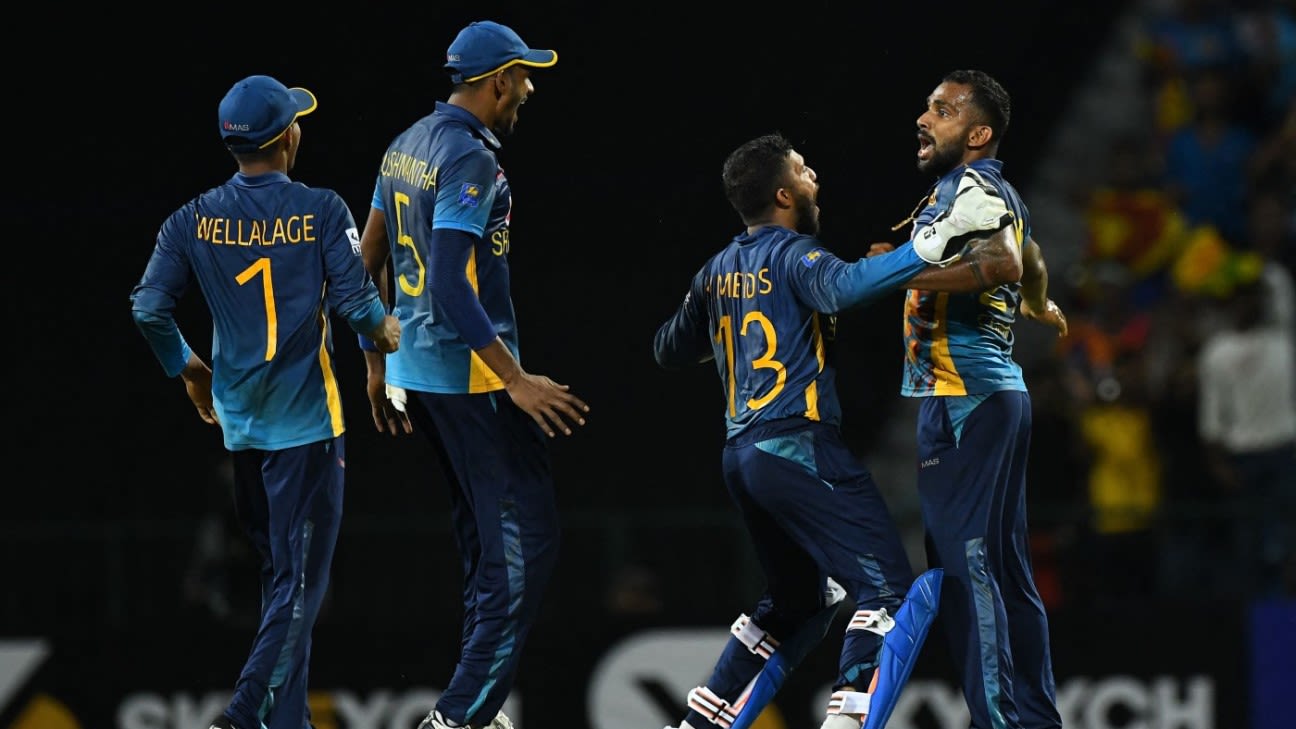 Sri Lanka produced a stirring victory in game two to level the series thanks to an excellent bowling and fielding display. Australia collapsed under the pressure of a chase to lose 5 for 19 and be bowled out for just 189. It was Sri Lanka’s spinners, in the absence of Wanindu Hasaranga, who sparked the collapse with Dhananjaya de Silva and Dunith Wellalage taking two wickets each before Chamika Karunaratne and Dushmantha Chameera tore through the lower order. Karunaratne took the key wicket of Glenn Maxwell and produced a fine run out to remove Alex Carey to finish player of the match. Adding salt into Australia’s wounds, Steven Smith hurt his left quad while batting and is under a cloud heading into the 3rd ODI as the visitors’ injury toll continues to mount.
Sri Lanka will take a lot of confidence from their performance having won without Hasaranga. The successful use of Dhananjaya, particularly in the powerplay to Australia’s openers, is a blueprint they will surely repeat again in this series. They do need more returns with the bat though as their entire top eight reached double figures but no one kicked on to make more than 36.
Australia are also frustrated that their top order were unable to kick on in Pallekele. David Warner and Smith both played well but made errors at important times. Australia vice-captain Alex Carey noted ahead of game three that the top order was keen to take the game deeper and produce bigger partnerships. They are also keen to sharpen up in the field after two untidy performances in the first two ODIs. But Australia bowled well in game two with debutant Matthew Kuhnemann producing a fine display after he was called in to replace Ashton Agar.

Charith Asalanka is arguably one of the most talented batters in Sri Lanka’s top order but he’s yet to have a truly breakout performance at ODI level. He’s made five scores of 50+ in 13 innings but never passed 77. He’s looked in good touch throughout the T20Is and ODIs so far this month but has yet to kick on. Sri Lanka really need him to take the game deeper in the absence of Hasaranga so that he can utilise his power in the last 10 overs and set the home side up for a big score.
Matthew Kuhnemann was extremely impressive on international debut in Pallekele. He flew in from the Australia A game at Hambantota on a helicopter at short notice and bowled and fielded superbly, picking two wickets and taking two very good catches. Even more impressive was the fact that he bowled inside the powerplay on debut to great effect, something Ashton Agar does not often do. Kuhnemann has a chance in the rest of this series to continue to rise up Australia’s pecking order of spinners and make a case to be in the Test squad if Agar’s side injury does not heal in time.

Sri Lanka could well go unchanged into game three if Hasaranga is still unavailable due to a groin strain. Their well-balanced attack troubled Australia and gave Dasun Shanaka options but the batting does still look a little vulnerable. They could bring in Bhanuka Rajapaksa, leave out Vandersay, and use Dhananjaya’s full quota of overs. But it seems unlikely.
Sri Lanka (possible): 1 Danushka Gunathilaka, 2 Pathum Nissanka, 3 Kusal Mendis (wk), 4 Dhananjaya de Silva, 5 Charith Asalanka, 6 Dasun Shanaka (capt), 7 Chamika Karunaratne, 8 Dunith Wellalage, 9 Dushmantha Chameera, 10 Jeffrey Vandersay, 11 Maheesh Theekshana
There are question marks over Smith but he hasn’t yet been ruled out. Mitchell Marsh (calf) or Mitchell Starc (finger) are both unlikely to be fit although both are close to returning. Cameron Green is available to bowl which could see him return to the side. He could come in and give Aaron Finch seven bowling options, with Head possibly sliding up the order to No.3 if Smith is ruled out. The only way Mitchell Marsh plays is if he doesn’t bowl. Australia also have Josh Inglis available if need be to replace Smith.
Australia (possible): 1 David Warner, 2 Aaron Finch (capt), 3 Steven Smith/Travis Head, 4 Marnus Labuschagne, 5 Alex Carey (wk), 6 Cameron Green, 7 Glenn Maxwell, 8 Pat Cummins, 9 Mitchell Swepson, 10 Matthew Kuhnemann, 11 Josh Hazlewood

Rain could play a part again with both games in Pallekele interrupted. There is a stray thunderstorm forecast for the afternoon. A fresh pitch at R Premadasa Stadium might not take as much turn as the surface in Pallekele but the spinners should still play a part.

“We lost wickets at crucial times and just couldn’t get a partnership of any real substance. So we will reflect on that. We’re at a new venue so we’ll take all the information in as best we can today and when we get into it tomorrow.”
Alex Carey speaking about what Australia need to improve on ahead of the 3rd ODI in Colombo
Tags: Australia, Australia in Sri Lanka, Sri Lanka, Sri Lanka vs Australia