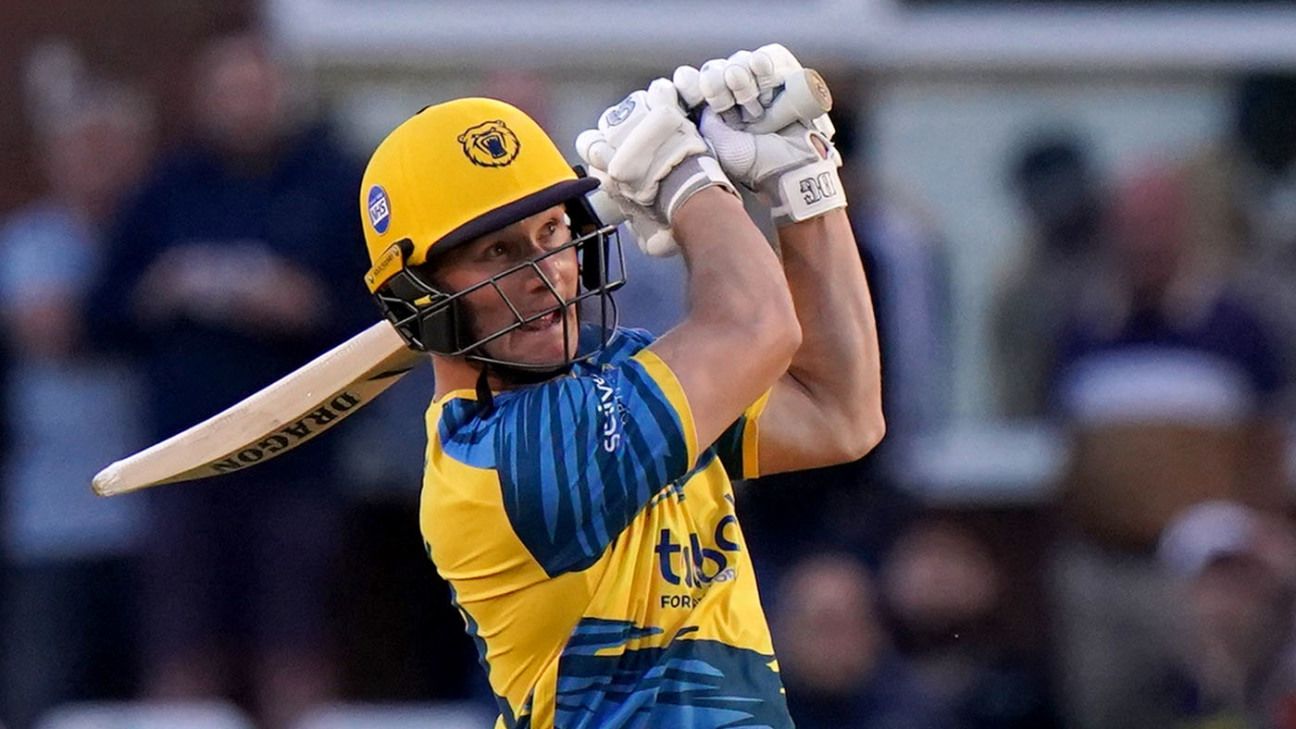 Birmingham Bears 98 for 5 (Benjamin 36) beat Nottinghamshire 97 for 5 (Hales 30, Lintott 2-6) by one run
Birmingham Bears returned to winning ways with a thrilling one-run Vitality Blast win over Notts Outlaws at Edgbaston. Needing three to win and two to tie from the last ball, Outlaws batter Tom Moores could only scuff Craig Miles for a single.
It rounded off a stunning Bears fightback by after Outlaws, chasing 98 for 5 in an eight-overs-per-side contest, charged to 55 for 1 after 20 balls as Alex Hales thrashed 30 from just nine balls. Spin bowler Jake Lintott turned the tide with a superb over which saw him dismiss Hales and Ben Duckett while conceding just two runs.
Outlaws needed 15 from the last over but could find only 13 as Miles held his nerve.
The game also featured two batters opting to retire out. With one ball to go and six runs needed, Samit Patel walked off from the non-striker’s end to get Calvin Harrison, a faster runner, to the crease. Earlier on, in the Bears’ innings, Carlos Brathwaite had retired out, in the belief that Sam Hain would be better-equipped to score quickly off the spinners.
Put in on a relentlessly damp, grey afternoon, the Bears made 98 thanks largely to Chris Benjamin, who hit 36 off 17 balls. Patel bowled with his customary nous and control for 2-0-12-2.
England paceman Olly Stone then marked his return to the first team after long-term injury with a wicket first ball but Notts were on course for victory until Lintott’s brilliant analysis of 2-0-6-2.
Bears lost Paul Stirling to the first ball of their innings, but the wicket came at a cost for Notts as Joe Clarke fell awkwardly, taking the catch at long leg, and limped from the field. Benjamin then improvised effectively, hitting four fours and two sixes. He was supported by lively cameos from Jake Bethell, with 17 off nine, at the start and Alex Davies, 14 from four, in the final over.
Outlaws also lost a wicket first ball when Clarke slashed Stone to short third man. Duckett and Hales hit immediate overdrive to heave the match their side’s way but they fell in the space of three ball from Lintott, the former slickly caught at deep extra by Hain and the latter driving a sharp return catch to the bowler.
The potential match-winners keep on coming in Outlaws’ batting line-up but Dan Christian holed out to Brathwaite and Moores and Patel failed to find the requisite 15 from the final over.
Tags: Bears vs Notts, Nottinghamshire, Vitality Blast, Warwickshire