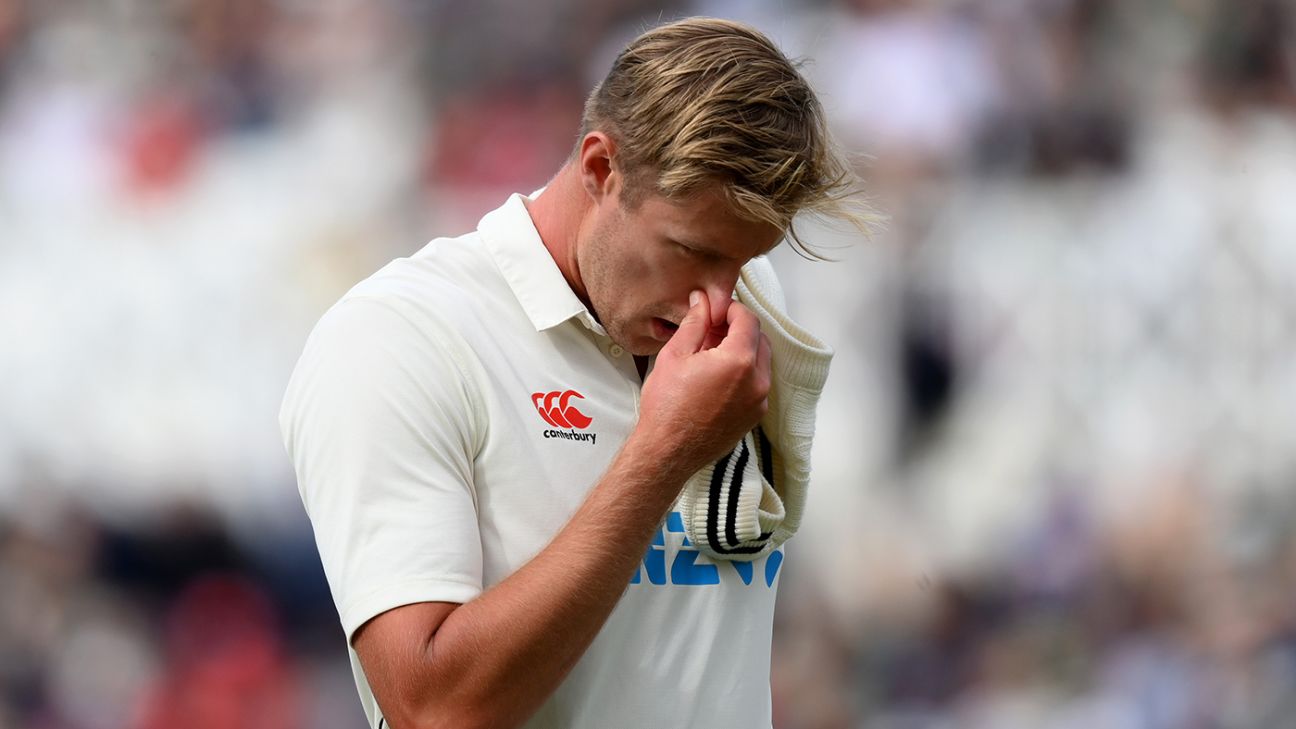 Kyle Jamieson, the New Zealand pace bowler, is set to return home with a stress-reaction in his lower back, meaning he will miss next week’s third and final Test at Headingley.
MRI scans revealed the extent of his injury after Jamieson pulled up mid-over experiencing sharp pain in his lower back on the third evening of the second Test, which England won by five wickets in a thrilling final session at Trent Bridge on Tuesday.
Jamison did not return to the field until the fifth morning after being passed fit to bat, coming into New Zealand’s second innings at No.10 but exiting for a six-ball duck after he was caught behind off Stuart Broad. Unable to bowl, however, New Zealand felt his absence as England chased down a target of 299, thanks to Jonny Bairstow’s onslaught in which he scored 136 off just 92 balls and Ben Stokes’ unbeaten 75 off 70 to take an unassailable 2-0 series lead.
It is expected that Jamieson, who was the pick of New Zealand’s bowlers during their five-wicket defeat in the first Test at Lord’s, will need four to six weeks’ rest before beginning a rehabilitation program targeting a potential return to play in September or October.
Related
Pace bowler Blair Tickner, who was with the Test side in England for their early tour games, was called into the squad as Jamieson’s replacement and will arrive in the UK ahead of the third Test. New Zealand also have Neil Wagner in their squad who is yet to feature in the series.
Meanwhile, Tickner’s domestic teammate, Dane Cleaver, received his maiden Test call-up as a replacement for wicketkeeper Cam Fletcher who was also ruled out of the tour with a grade-two right-hamstring strain, sustained while fielding as a substitute on day four of the second Test. Fletcher will need six to eight weeks to recover.
“It’s always sad to see players forced to leave a tour early with injury,” Gary Stead, the New Zealand coach, said. “Kyle had played such a big role in the first Test at Lord’s and I know how disappointed he was to have had his involvement in the second Test curtailed.
“He’s obviously a huge asset for us and we’ll be making sure we are patient with his recovery to ensure he returns fully fit with plenty more important cricket still to come later this year.”
Jamieson’s injury deepened a luckless run for the tourists, who were also without captain Kane Williamson after he tested positive for Covid-19 on the eve of the second Test.
Jamieson has missed only one of the 17 Tests New Zealand have played since his debut, left out as part of his workload management during their victory over England at Edgbaston last year. After taking six wickets at Lord’s last week he rose to No.3 in the ICC men’s Test bowling rankings.
Tags: England, England vs New Zealand, ICC World Test Championship, New Zealand, New Zealand in England