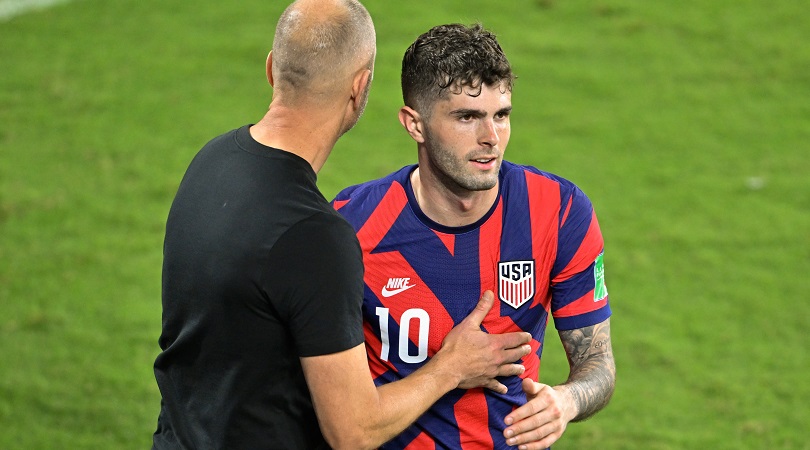 The USA World Cup 2022 squad has been announced by manager Gregg Berhalter, with Chelsea forward Christian Pulisic set to lead the team in Qatar.

USA have been drawn alongside England, Wales and Iran in Group B of the Qatar World Cup 2022, tough tests they will have to overcome if they want to match their ambitions of reaching the knockout stages.

However, the USA already has history of beating one of the nations in the World Cup. In 1950’s ‘Miracle on Grass’, the USA inflicted the most shocking World Cup defeat in England’s history. Sixty years later, a 1-1 draw with Rooney, Lampard, Gerrard & Co meant the USMNT went on to top their group ahead of the Three Lions.

Can they complete a hat-trick of World Cup surprises against England? Hopes are high for a knockout run with a crop of budding youngsters, ahead of their co-hosting duties in 2026.

They will need to find some consistency, though, something that may be tough for a squad whose average age is 24. After beating Mexico in the 2021 Gold Cup Final, qualifying expectations ramped up, but defeats to Costa Rica and lowly Panama, and one point from six against Canada, were symptomatic of a team that blows hot and cold.

Despite the squad’s age, the USA does have a strong mentality. The youthful USMNT have no fear, their lung-bursting ability to win the ball back – typified by Weston McKennie of Juventus and Leeds’ Tyler Adams together in midfield – defining a suffocating high press. Injured for much of 2021-22, teenage winger Gio Reyna is starring again for Borussia Dortmund and competing for a World Cup starting berth with Christian Pulisic, Timothy Weah, Josh Sargent, Brenden Aaronson and more.

This inexperience could prove their downfall, though. Failure to qualify in 2018 makes DeAndre Yedlin the only player in the squad boasting World Cup minutes to his name. Defensive leader Miles Robinson tearing his Achilles is a big blow, with centre-back options to partner Walker Zimmerman limited to out-of-retirement Tim Ream or Celtic’s Cameron Carter-Vickers.

With the era of Brad Friedel, Kaser Keller and Tim Howard in the past, too, keeping out opponents will prove a tough task for the USA goalkeepers. Facing their US-based captain, Gareth Bale, could further inflict embarrassment on the nation, but a knockout stage berth will certainly help them prepare further for hosting the tournament in 2026.

Part of the USA’s quarter-finalists in 2002, Gregg Berhalter cut his coaching teeth in Sweden with Hammarby, then back home at Columbus Crew. He has trusted in youth since his start in December 2018, jettisoning older stars Jozy Altidore and Michael Bradley in favour of a high-tempo system. It won the USMNT the 2021 Gold Cup.

Who is USA’s best player?

Christian Pulisic’s five goals made the difference in qualifying – now it’s time for Captain America, who made his debut aged 17 in 2016, to add consistency. The Chelsea winger couldn’t establish himself under Thomas Tuchel, leading to tongue-in-cheek suggestions that American Todd Boehly fired Tuchel to raise his nation’s hopes in Qatar.

How many players are USA allowed to take to the 2022 World Cup?

National managers were allowed to bring 26 players to last summer’s European Championship for the first time at a major tournament, as a special measure brought in due to the COVID-19 pandemic – while last year’s Copa America allowed squads of 28 players.

Now it has been announced that 26-player squads will return for the Qatar World Cup, an expansion from the usual 23-man teams.