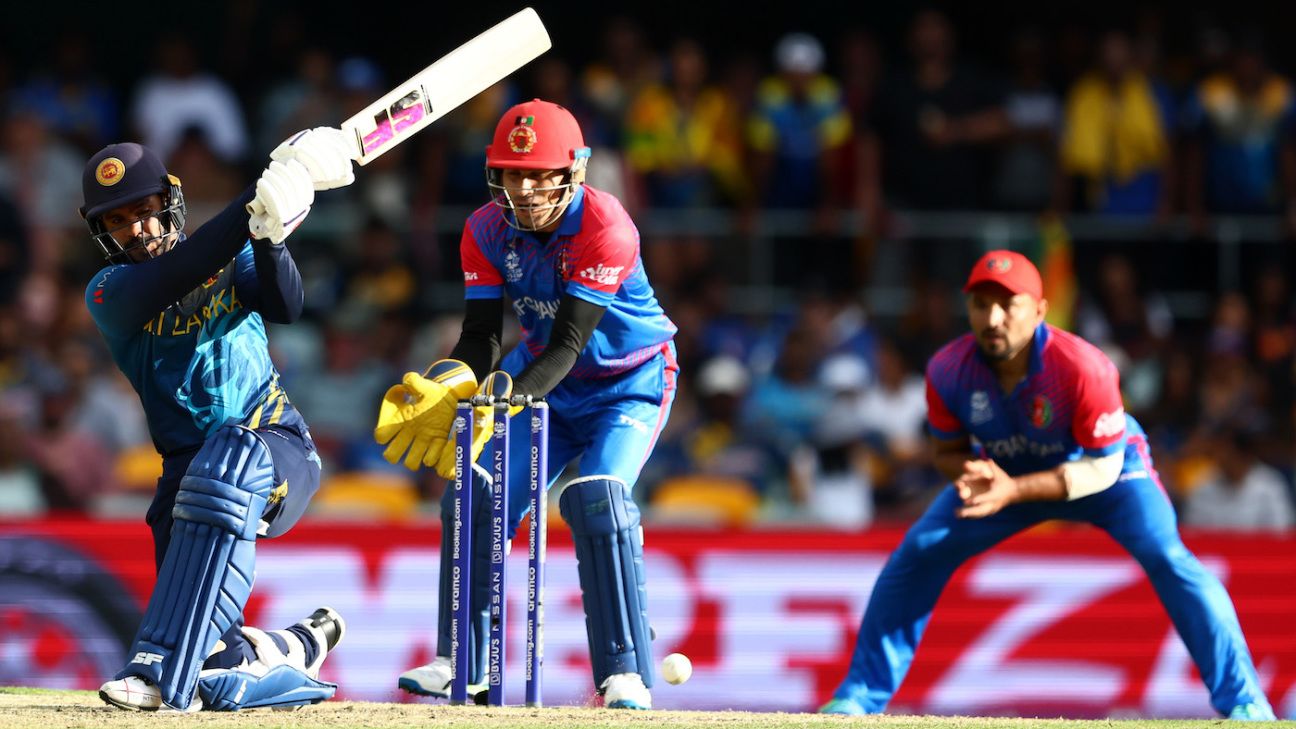 In the chase against New Zealand on Saturday, Sri Lanka had lost their top three for five runs, inside two overs. By the halfway stage they had lost six. Against Namibia, early in the tournament too, their top order had fallen in a heap. The key for Sri Lanka, assistant coach Naveed Nawaz said, was to keep wickets in hand through the early overs, even if they didn’t score many runs.
Because that’s exactly the strategy that helped them overcome Afghanistan on Tuesday. After six overs, Sri Lanka were only 28 for 1, hitting just four fours in the powerplay. After 10 overs, Sri Lanka were scoring at barely 10 an over but had lost only two wickets.
The remaining 82 runs required for victory then took only 51 balls to get – Dhananjaya de Silva in particular raising the tempo, after the foundation had been laid. Sri Lanka strolled to a target of 145 with nine balls, and six wickets to spare.

“The plan was, even if we got less runs – somewhere around 25 to 30 in the first six overs – not to panic, and to keep wickets in hand.”

“We’ve been talking about losing less wickets during the powerplay as well as the first ten overs,” Nawaz said after the match. “If you look at the pattern that’s building in most teams, the number of runs that you get in the first ten overs has been far less than in the subcontinent. And the number of runs you get at the bottom end has been quite a bit.
“That’s been our plan during this World Cup. Whenever we had a good opening stand, or someone taking responsibility from the top, we’ve done well.”
Against Afghanistan, Sri Lanka were especially wary of losing wickets to Mujeeb Ur Rahman. He dismissed Pathum Nissanka with a near-unplayable delivery, but Sri Lanka were clearly happy to play him out and wait for easier overs down the line. Mujeeb took 1 for 11 in his three powerplay overs, but his last over went for 13 runs.
“We knew that Mujeeb’s going to bowl at least two overs in the powerplay,” Nawaz said. “So the plan was, even if we got less runs – somewhere around 25 to 30 in the first six overs – not to panic, and to keep wickets in hand. Once their main bowlers were bowled out, there were many bowlers we were thinking were gettable. We knew we were chasing 140, which is not a big total, and we could always get there.”
De Silva, who guided Sri Lanka through the chase with his 66 not out off 42, made his first half-century of the tournament. In fact, it was his third T20I fifty, despite his having batted mostly in the top four (23 previous innings). De Silva is in the team because of what he adds with the ball, as well as in the field. But Sri Lanka hope this was a breakthrough innings. It was his highest score in this format.
“Yes, I think it’s a relief that Dhananjaya is coming into runs,” Nawaz said. “He’s always shown potential, hitting 30s, 40s, and 20s all the time. But I think it’s good to see him finishing a game and coming through that game, 60-plus not out.”
Tags: Afghanistan vs Sri Lanka, Dhananjaya de Silva, ICC Men's T20 World Cup, Naveed Nawaz, Sri Lanka