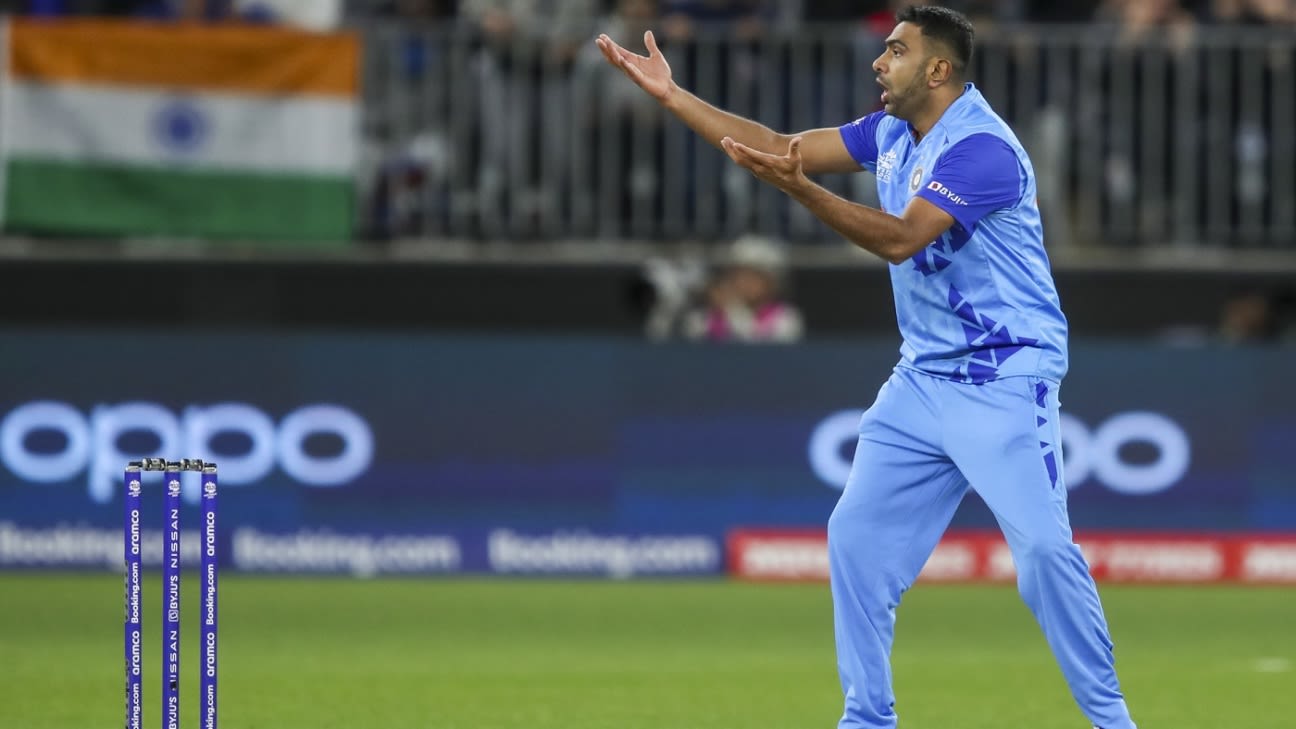 South Africa needed 25 from 18 balls with six wickets in hand when India captain Rohit Sharma decided to bring R Ashwin on for his final over.
The Perth surface had assisted fast bowlers throughout the game, but India had one over of spin left to squeeze in. David Miller took advantage of that and hit Ashwin’s first two balls for two sixes to all but seal the game.
Related
While Ashwin trapped Tristan Stubbs lbw with his fourth ball, his over left South Africa needing a run-a-ball 12 off the last two overs, which Miller and Wayne Parnell knocked off with two balls to spare.
After the game, Rohit said his decision to give Ashwin the 18th over was influenced by how spinners had fared in the final over at the 2022 T20 World Cup. In India’s opening game, Pakistan left-arm spinner Mohammad Nawaz had failed to stop India from scoring the 16 runs they required to win.
“I have seen what happens in the last over with spinners, so I just wanted to go the other way and see if I could finish Ash and not keep him for the last over,” Rohit said at the post-match presentation. “I just wanted to make sure that the seamers were bowling the right overs but honestly, when you have options like that, you have to use them at some point. I thought given the new batter [Stubbs] came in, it was a perfect time for him to bowl. But things like that can happen. Miller played some good shots as well.”
Ashwin finished with figures of 1 for 43 from his four overs, at an economy rate of 10.75. He was hit for four sixes and was the most expensive bowler on either side. After the match, Aiden Markram was asked if South Africa had pre-decided to attack Ashwin.
“I think naturally that’s how our game would pan out when the seamers are all that difficult to get away,” Markram said. “We expected them to take on Keshav [Maharaj]. I’m sure they expected us to take on Ashwin as well, just because of the nature of the wicket, because the seamers were so difficult to get away.
Rohit: “We gave too many chances on the field and we were not quite clinical”•Getty Images
“It almost got to a stage where we had to target someone because they bowled so well initially in the first ten overs up until the drinks break. It got to the stage where we had to pick someone. It could be anyone on any night. And sometimes you execute, sometimes you don’t.
“You pick those match-ups according to who you’re most comfortable against on the night. You get to different conditions and those match-ups would change completely. Yeah, it was a discussion we had at the drinks break to pick one of the bowlers and commit to that, and if it comes off, then it might give us a chance.”
Earlier, India scored 133 for 9 on a fast, bouncy surface before having South Africa 40 for 3 after ten overs. They had a couple of opportunities to press home the advantage but Virat Kohli put down Markram in the 12th over. In the next over, Rohit missed a run-out chance that could have sent Miller back. Markram and Miller made India pay for their mistakes, adding 76 off 60 balls to shift the momentum.
“Honestly, when you see that score [40 for 3], you will always think you are in the game because the pitch is such that a wicket can come at any time for the seamers,” Rohit said. “But I felt that was a match-winning partnership from their perspective from Markram and Miller.
“We were a little poor in the field as well. We gave too many chances on the field and we were not quite clinical. We have played in such [cold] conditions before so that was not an excuse at all. We were not just good enough.
“The last two games we played, we were pretty good in the field and we want to continue to be consistent in that department. But unfortunately we couldn’t hold our chances, a few run-outs we missed, including myself. But we need to keep our heads high and think about what’s coming for us and take learnings from this game, what we need to do in games like that.”
Tags: Aiden Markram, David Miller, ICC Men's T20 World Cup, India, India vs South Africa, Ravichandran Ashwin, Rohit Sharma, South Africa