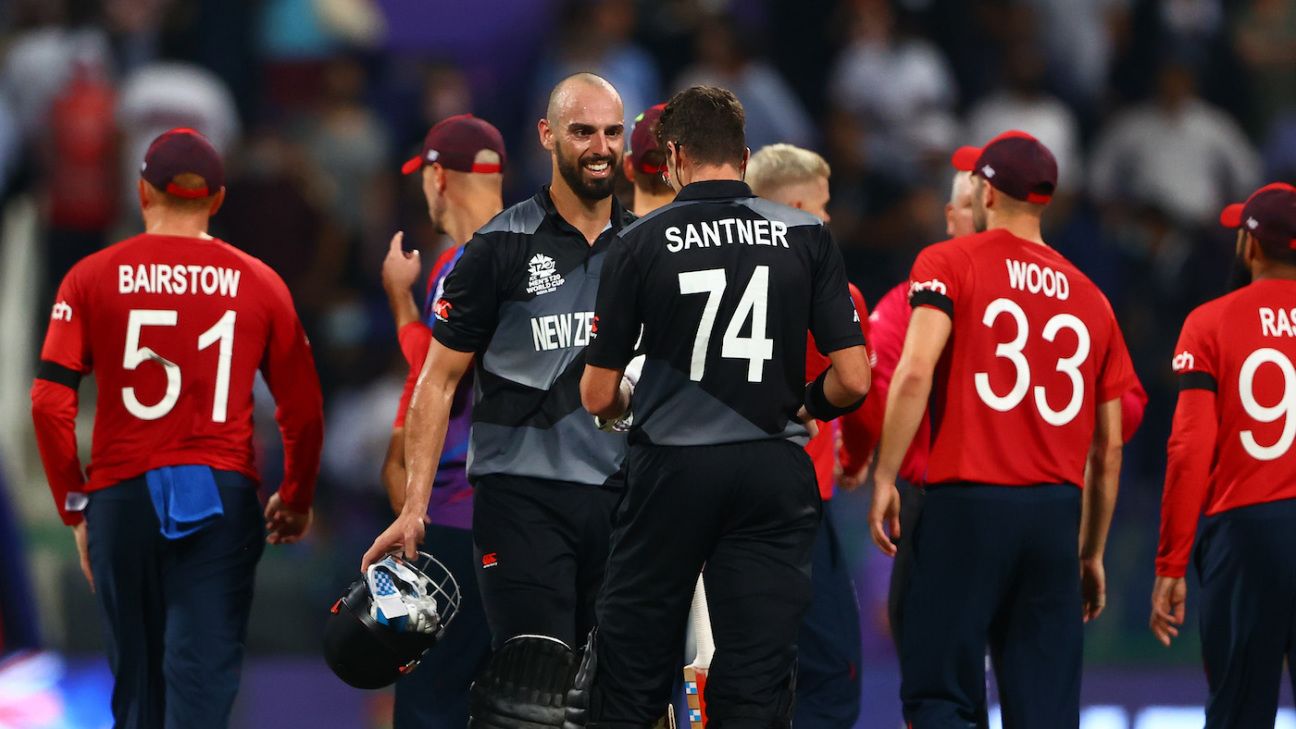 England and New Zealand’s last meeting in this format was an instant classic, a slow-burning epic which saw England’s World Cup hopes go up in flames.

Just short of a year on, England will be staring elimination in the face once again, unless they can overcome one of the tournament’s two unbeaten sides at the Gabba. They would still be alive mathematically with a defeat on Tuesday night, but will be relying on Afghanistan beating Australia on Friday, before having to overcome Sri Lanka in their final fixture in Sydney. In short, this is a must-win.
Net run rate shouldn’t be a major concern for England at this stage, thanks in no small part to Ireland’s Lorcan Tucker. Australia were heading for a convincing win on Monday evening when Ireland were 25 for 5, but Tucker’s unbeaten 71 closed the margin of defeat significantly. As a result, two wins should be enough for England to reach the semi-final; and they have the advantage of playing the last game in Group 1.
Related
New Zealand have been hugely impressive in brushing Australia and Sri Lanka aside, and victory in Brisbane would seal for them a semi-final berth for the third successive T20 World Cup. Moreover, given their net run rate, they will be close to locking in the top spot. New Zealand will still be well-placed even if they lose, though they would likely need to beat Ireland in Adelaide on Friday to ensure their progress.
Enough about the permutations and onto the game itself, which could be won and lost in the two powerplays. Trent Boult and Tim Southee, New Zealand’s opening bowlers across formats for most of the last decade, have been lethal with the new ball since arriving in Australia, while England’s top order is yet to fire. Jos Buttler has been very successful against Boult in T20s: but can he take his Rajasthan Royals team-mate down in Brisbane when it matters most?
England’s seamers were excellent with the new ball against Afghanistan but were wayward against Ireland; they conceded 59 runs in the first six overs, with Chris Woakes coming in for particularly brutal treatment. Finn Allen is the key wicket: New Zealand blitzed 65 for 1 against Australia when he raced out of the blocks but stumbled to 25 for 3 against Sri Lanka after he fell early on.
Moeen Ali and Liam Livingstone could be shuffled up after limited opportunities so far this tournament•ICC via Getty Images

“The one person that you want in your team when the pressure is on is Ben Stokes,” Paul Collingwood, England’s assistant coach, said on Monday. Stokes has managed only 41 runs off 42 balls in his five T20Is since arriving in Australia, and for all his quality as a bowler, fielder and leader, now is the time for him to turn the intangibles into game-defining contributions.

England’s batters have targeted Ish Sodhi whenever they have faced him in T20Is: he has nine wickets in as many appearances against them, with an eye-watering economy rate of 10.64 runs per over. Sodhi took the key wicket of Buttler in last year’s semi-final, and will need to be at his best on Tuesday night against a deep batting line-up.

England’s selection came under scrutiny after their defeat to Ireland but they were due to play an unchanged team against Australia before the game was washed out. As a result, it seems unlikely they will make changes barring a late injury, though Liam Livingstone and Moeen Ali could be shuffled up the order after limited opportunities so far in this tournament. Stokes has hardly trained, but has been declared fully fit.

David Hussey describes the Gabba as “probably the best batting pitch in Australia for white-ball cricket”, and the numbers back that up: the average scoring rate there in men’s T20Is is 7.94 per over, the second-highest of any Australian ground. The pitch was on the slow side in Australia’s win against Ireland on Monday, and the same strip will be used on Tuesday, which could bring spinners into play.

Bad weather has followed England around over the last week, and the forecast for the match is not the best either, with rain due to fall throughout Tuesday morning. However, the weather is expected to clear up later in the day, and the Gabba’s renowned underground drainage system could ensure the teams get on to the pitch.

“It’s frustrating when you’ve got the rain around in Melbourne: it was almost like English conditions there. It’s nice to come up to Brisbane where it’s a lot warmer, and we’re all looking forward to getting a full 40 overs in.”
Paul Collingwood is hoping for a dry evening at the Gabba after the washout against Australia at the MCG

“Our brand of cricket might not look as aggressive as them, but we need to stick to what we have done well for a period of time, and make sure we throw our own punches in our own way.”
Lockie Ferguson doesn’t expect New Zealand to make any major adjustments to their style of play against England
Tags: England, England vs New Zealand, ICC Men's T20 World Cup, New Zealand