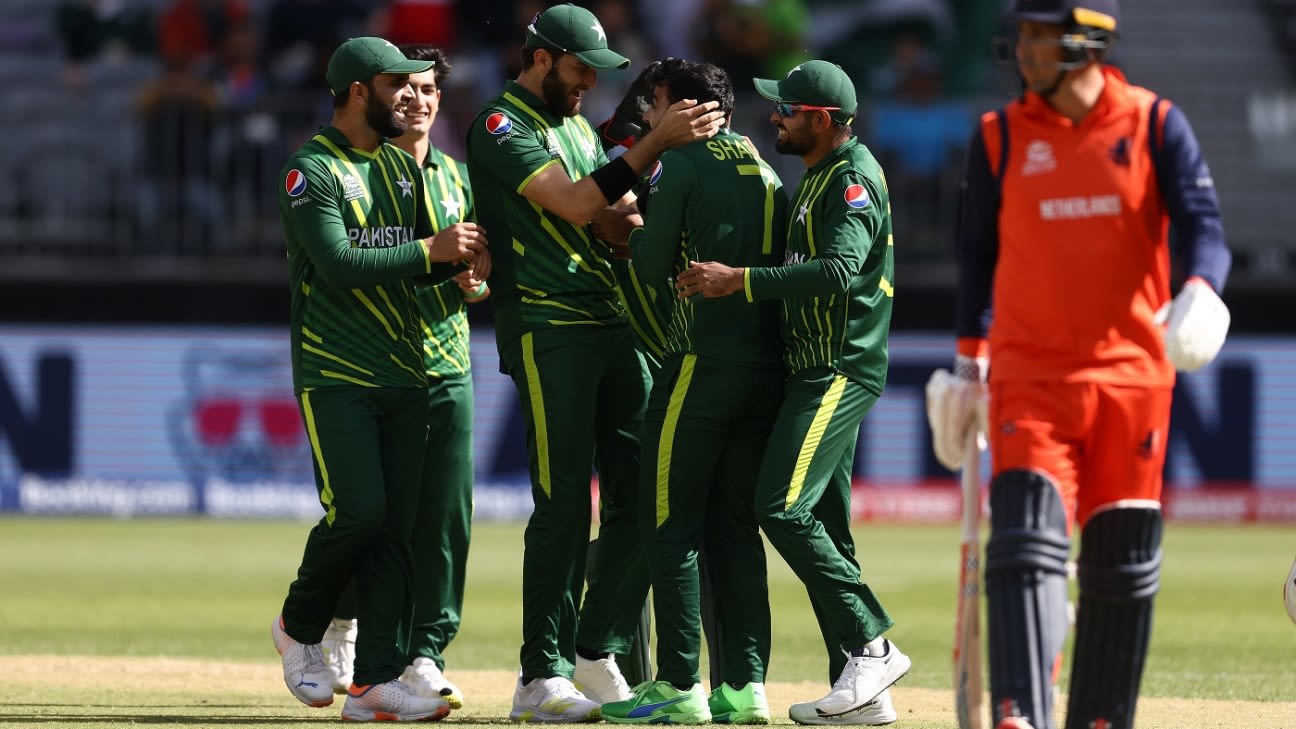 Pakistan 95 for 4 (Rizwan 49, Glover 2-22) beat Netherlands 91 for 9 (Shadab 3-22, Wasim 2-15) by six wickets
Pakistan’s fast bowlers proved too hot for Netherlands on a bouncy surface in Perth, giving them a comfortable six-wicket win and their first points of the T20 World Cup. Overwhelmed by the Pakistan bowling attack, Netherlands could post only 91 for 9 after choosing to bat and eventually lost their third game in a row in the Super 12s.
Netherlands’ batters were tested by short balls, with Bas de Leede copping a bouncer on the grille which forced him to retire hurt. Shaheen Shah Afridi took 1 for 19, Haris Rauf cranked his pace up to finish with 1 for 10, Naseem Shah conceded only 11 runs in four overs while Mohammad Wasim impressed with his back-to-back wicket-taking yorkers. Shadab Khan complemented the seamers, his wristspin accounting for three wickets.
The sub-100 chase was expectedly comfortable for Pakistan, with two key cogs to their batting line-up getting among the runs. After Babar Azam fell cheaply, Mohammad Rizwan (49) and No. 3 Fakhar Zaman (20) – the latter returning to the XI after a knee injury kept him away for seven weeks – put together a 37-run stand. Pakistan closed out the chase with 37 balls to spare, which was also their very first T20I win on Australian soil.
The win for Pakistan, their first after two last-ball losses to start the World Cup, keeps them in contention for semi-final spot, but fate is no longer in their hands. Not only do they need to win their last two games – against Bangladesh and South Africa – but also need results from other Group 2 games going their way.
A new-ball test of fire
The Pakistan quicks stepped up with the new ball for the third game in a row, with Afridi earning his first new-ball wicket in the competition too. He went short to opener Stephan Myburgh, drawing a top-edged pull from the left-hand batter. The extra bounce induced that error, and the other pace bowlers caught on to that quickly.
The seamers got the ball to rise awkwardly while operating at more than 140kph, and the No. 3 de Leede faced the brunt of it when a Rauf short ball left him with a bleeding cut under his right eye. De Leede was later replaced by concussion substitute Logan van Beek.
Shadab owns the middle overs

Pakistan conceded only two boundaries in the powerplay, allowing Netherlands to score only 19 runs in the first six overs. Shadab was introduced by Babar as soon as the field restrictions were lifted.
Shadab had finished his spell against Zimbabwe with two wickets off his last two balls and against Netherlands, he struck off his first ball, getting No. 4 Tom Cooper to pull a loose half-tracker to deep midwicket
While that was a lucky break, the next dismissal wasn’t with Shadab’s googly turning in sharply and pinning opener Max O’Dowd in front of middle and leg stumps. That wicket had Netherlands reeling at 34 for 3 after ten overs.
The captain Scott Edwards then looked to build a partnership with Colin Ackermann, but the boundaries were hard to come by, as they relied more on the singles and twos. However, the 35-run fourth-wicket partnership off 37 balls was ended by Shadab when Ackermann missed the reverse lap and was hit in front of off stump. He finished with 3 for 22.
Mohammad Rizwan top-scored for Pakistan with 49 runs•Getty Images
The quicks wrap it up

With the final quarter of the innings left, Edwards tried to play some innovative shots, but his scoop off Naseem went to deep fine leg. Roelof van der Merwe was dismissed next, backing away to Rauf before having his stumps flattened.
With Netherlands at 74 for 6 after 17 overs, chances of a big finish appeared slim. The seamers conceded only 17 in the last 18 balls, with Wasim causing most of the damage with his back-to-back yorkers that shattered the stumps of Tim Pringle and Fred Klaassen. Naseem bowled a tight 20th over to finish with an economy of 2.75 in four overs and set Pakistan a target of 92.
Runs for Rizwan, Fakhar
After a short delay due to impending rain, the chase began with Babar and Rizwan looking to get back in form with a small target ahead of them. Rizwan raced off the blocks but Babar was run out via a van der Merwe direct hit for 4.
Fakhar entered at No. 3, instead of Shan Masood, and played away from his body to find boundaries through the off side. When the Dutch seamers aimed at his pads, he used his wrists to clear the leg-side infield.
Even though Fakhar had an injury scare after an awkward dive, he recovered to continue. However, he was dismissed for 20 when he got an outside edge to a ball angling across him, with the wicketkeeper taking a screamer diving to his left.
Masood, who came in at No.4, then combined with Rizwan, who hit five fours during his 39-ball 49. However, both batters fell late in the chase, Rizwan one short of his 23rd T20I fifty and Masood one short of the target.
That brought Shadab into the middle. He cracked a four to hit the winning runs, and soon after collected the Player-of-the-Match award while still wearing his pads.
Tags: ICC Men's T20 World Cup, Mohammad Rizwan, Netherlands, Netherlands vs Pakistan, Pakistan, Shadab Khan