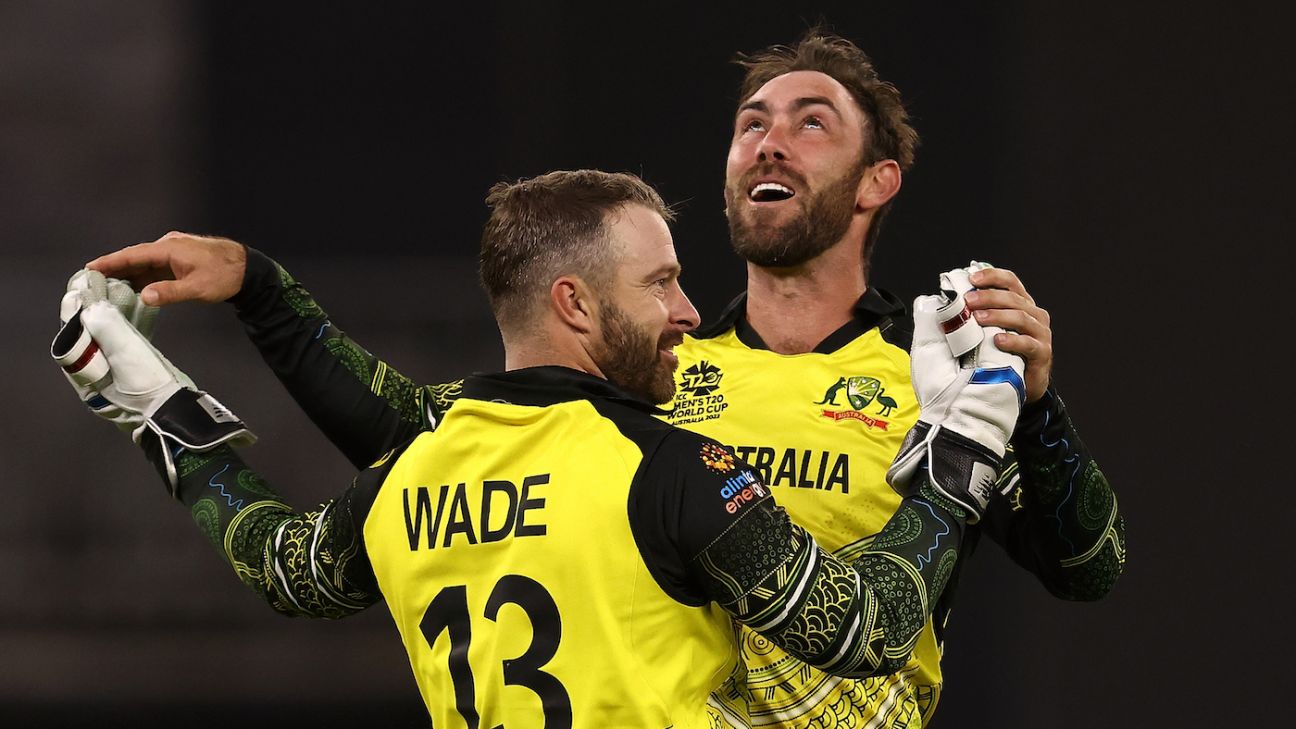 Australia are negotiating a second Covid-positive case in three days with wicketkeeper Matthew Wade testing positive just 24 hours out from their vital clash with England at the MCG on Friday.
Wade did not train at Australia’s optional indoor session at the Junction Oval on Thursday afternoon after testing positive. It follows hot on the heels of Adam Zampa missing Australia’s clash with Sri Lanka after testing positive.
But under tournament rules, Wade is allowed to play and is likely to line up for Australia despite the positive test. His symptoms are minor. Wade will however need to travel to the ground separately to the rest of the squad and will not be able to use the team changeroom prior to or during the game.
Zampa was also set to play in Perth but a decision was made by the medical staff to take a conservative route to rest him with the able backup of Ashton Agar ready and available. Zampa is set to return against England after testing negative on Thursday. He trained at the Junction Oval, doing some bowling with assistant coach Daniel Vettori.
Australia’s selectors do not have the option to replace Wade though, as he is the only specialist wicketkeeper in Australia’s 15-man squad, after backup keeper Josh Inglis was withdrawn prior to the tournament due to a severe cut to his hand. Inglis was replaced by allrounder Cameron Green.
Australia cannot fly in a backup keeper such as Alex Carey, Josh Philippe, Ben McDermott or Jimmy Peirson to play as Wade would need to be permanently replaced in the squad for the remainder of the tournament.
This was the exact scenario Australia had hoped to avoid when replacing Inglis with Green, having gambled that there was a very slim chance that Wade would go down.
Glenn Maxwell took the liberty of donning some fresh wicketkeeping gloves at the indoor session to do some catching with Australia assistant coach and former grade keeper Andre Borovec. But it was done as a lighthearted show for the TV news cameras at the session and brought about laughter from the chairman of selectors George Bailey. Captain Aaron Finch also suggested to Maxwell that he himself would keep before Maxwell would, especially given Maxwell’s bowling requirements.
Finch and coach Andrew McDonald stated pre-tournament that David Warner would likely do it in case of an emergency given he has kept in a Test match for Australia as an in-game replacement for Brad Haddin. Finch has also done it in the BBL for Melbourne Renegades.
But it is unlikely Australia will need a contingency for Wade, given he is set to play. Even if he doesn’t, the chances of the game against England going ahead at all are getting slimmer by the hour in Melbourne as more rain bucketed down on Thursday, with more expected on Friday.
Tags: Australia, Australia vs England, ICC Men's T20 World Cup, Matthew Wade