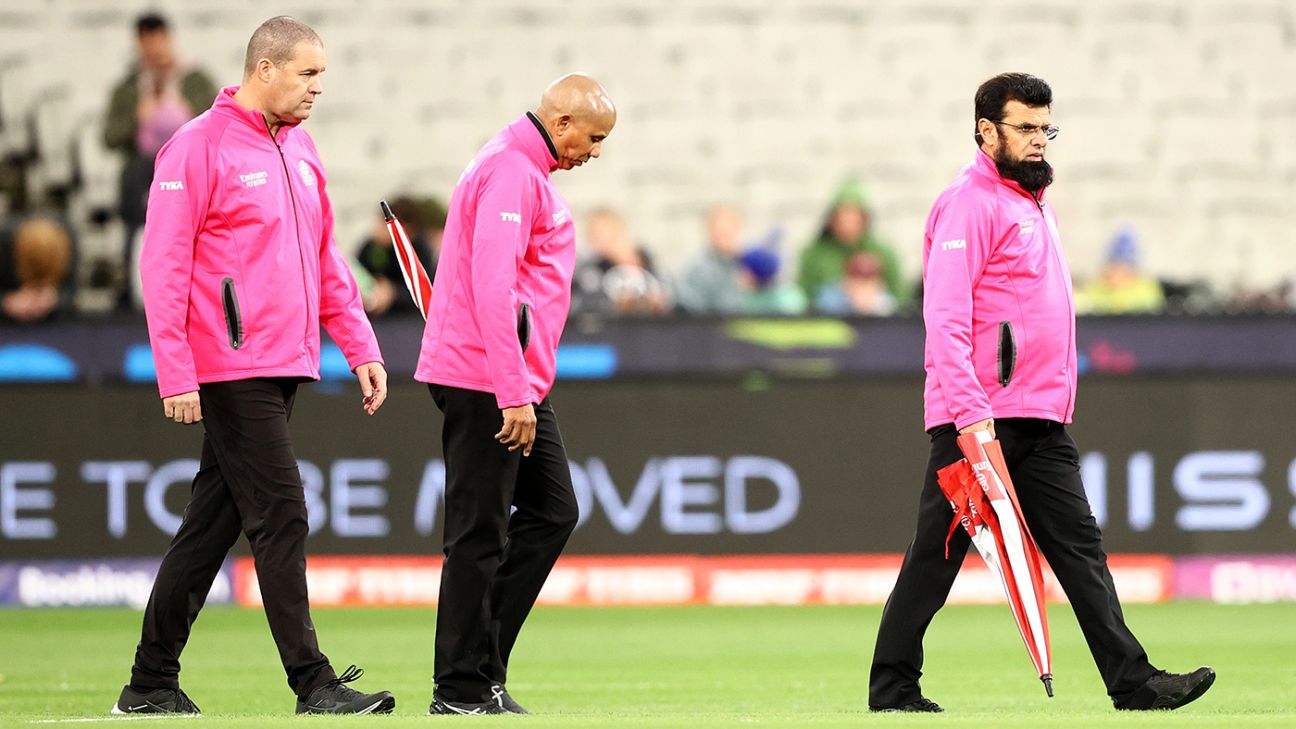 Jos Buttler backed the decision to call Australia’s clash against England off without a ball being bowled, saying conditions weren’t “fit to play”, and that “every bowler who bowled” would have had concerns over the playing surface.
“They [the umpires] had some big concerns and, I think, rightly so,” Buttler said, after a series of inspections had led to an abandonment at 8.49pm local time. “The outfield is very wet, there are some areas within the 30-yard circle which were not fit to play. As much as we all want to play cricket, it has to be safe and it certainly wasn’t that.”
The abandonment followed heavy rains which have lashed Melbourne for much of the past two days. Even though the rain had eased by the time this contest was due to start, the outfield remained too wet, with both captains understood to be reluctant to risk their fast bowlers in damp conditions.
It wasn’t until almost two hours later that the game was officially called off, after yet another flurry effectively made the decision for everyone involved. It also meant that a day that should have featured a double header instead had not a single ball bowled, with heavy afternoon showers ruling out any possibility of play between Ireland and Afghanistan earlier in the evening.
Chris Brown, Joel Wilson and Aleem Dar inspect the outfield after heavy rain•Getty Images
“I think every bowler who bowled there would have had concerns,” Buttler said. “Player safety is really important and it wasn’t fit to play whether it’s our bowlers or Australia’s bowlers. I think that the right call was made.”
For context. Melbourne is on track for the city’s wettest October since 1975. It has experienced more than double its long-term monthly average. It is also the first time in recorded history Victorian Premier cricket has experienced five straight washouts to start a season.
This latest washout means England have just one win in three games, and, barring further weather interruptions, will likely need two wins out of two to guarantee themselves a semi-final spot. It’s not a position one of the tournament favourites might have been expecting to find themselves in at this stage, but a DLS defeat to Ireland and this washout means their margin for error has shrunk considerably. Even so, the England captain said he had no complaints about the corner the weather had backed his side into.
“I don’t really have any frustrations. I am not a weather expert in Australia at this time of the year, but we all want to play full games of cricket. Of course we do. Naturally we play a sport which is in the open air and the elements are a huge part of our game. They affect the surfaces we play on, they affect conditions in an intriguing way, and that’s what makes our sport really unique.
“But now, unfortunately, we’ve had two games affected by the weather. You don’t want to be involved in those games, but it’s going to happen wherever you play in the world. Certainly in some places you play, you’re generally going to be affected by some weather at some point and it’s a shame tonight, especially for everybody involved.
Related
“But there wasn’t any pressure from anyone [to play today]. Common sense prevailed. As disappointing as it is, as I’ve just mentioned, for everybody involved the conditions weren’t fit.”
While the ICC will be relieved that last week’s thrilling India-Pakistan game evaded the wet conditions at the MCG, this was the other marquee game the tournament will have wished the rains had stayed away from. Even with intermittent rain throughout the day, 37,565 fans showed up for the evening game, with unofficial estimates suggesting crowds of up to 60,000 would have been possible if the weather had been conducive. They were instead left to huddle around the upper terraces searching for shelter for much of the evening in chilly conditions, watching multiple pitch inspections that never amounted to much.
Buttler said he sympathised with the fans, insisting England would rather have played the game, whatever the outcome, rather than take a draw without a ball being bowled.
“All the fans who came to watch this game live, and everyone wanting to watch on TV, it’s disappointing for them. For players especially: Australia against England at the MCG is a must-win World Cup match, as as big as it gets in your career. They’re the games you want to be involved in, no matter what the result is going to be. It’s something you want to experience as you don’t know how often those kinds of opportunities come around. There is a element of sadness that you don’t get to win, lose or draw.”
But he was adamant that, as long as England controlled their own destiny, they wouldn’t concern themselves with other results.
“Until something’s completely out of our control, we won’t worry about that,” he said. “We know we’ve got two games left to play. And we want to win those two games, and give ourselves the best chance to get through to the next round.”
Tags: Australia, Australia vs England, England, ICC Men's T20 World Cup, Jos Buttler