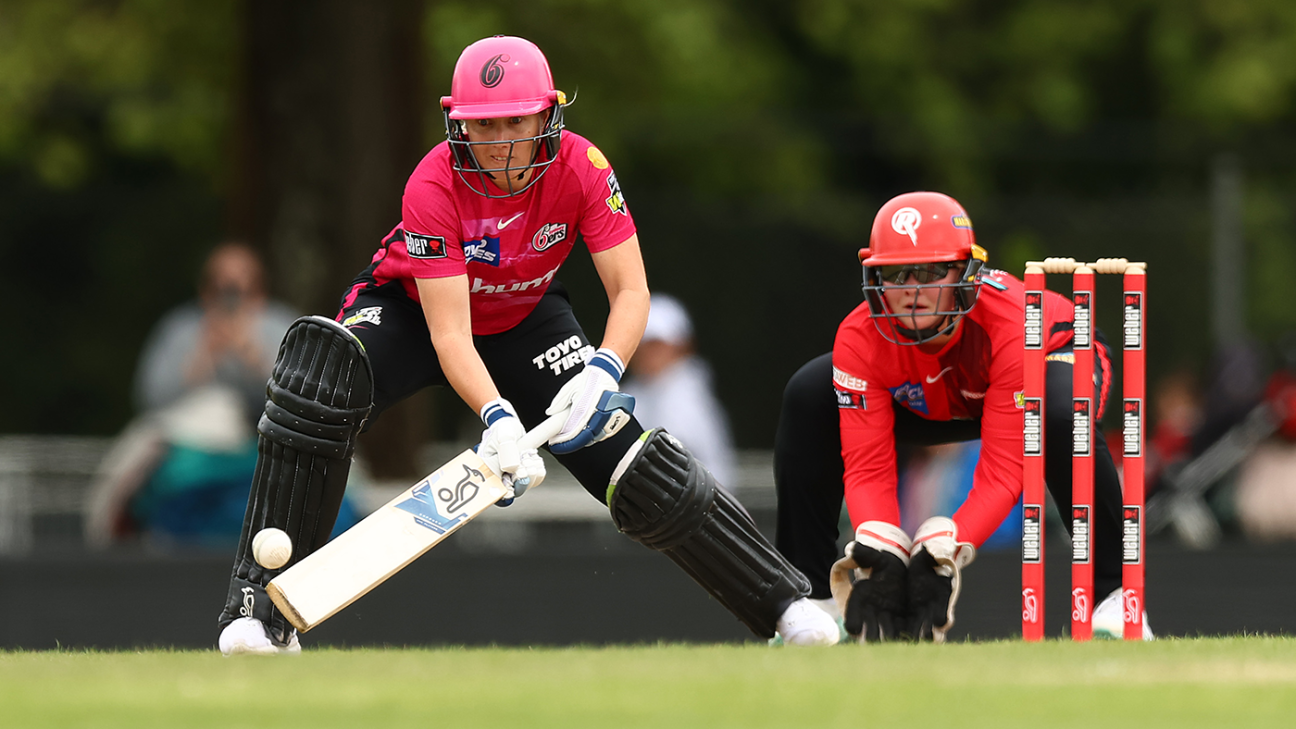 Sydney Sixers 3 for 188 (Healy 78, Bates 66) beat Melbourne Renegades 9 for 151 (Leeson 52, Brown 3-18, Cheatle 3-28) by 37 runs
A rejuvenated Alyssa Healy blasted the Sydney Sixers to a comprehensive 37-run victory over the Melbourne Renegades in Ballarat and to the top of the WBBL points table.
Healy thumped three sixes in her 78 off 54 balls while fellow opener Suzie Bates crunched 66 off 47 to steer the Sixers to 3 for 188 at Eastern Oval.
Healy, who entered the fixture with just 53 runs at 10.60 this season, combined with Bates for a match-winning 151-run first-wicket stand, before both fell to Renegades captain Sophie Molineux.
Bates was grassed twice before finally holing out to Shabnim Ismail on the deep midwicket boundary, before Molineux struck again two balls later, bowling Healy around her legs.
But Molineux’s double-strike failed to slow Sixers, who plundered 36 off the last three overs, through Ash Gardner, Erin Burns and captain Ellyse Perry.
“It was nice to spend some time out there,” Healy said. “I’ve been waiting seven years to have a really good partnership with Suzie Bates.
“The fact we could do that today and get our team off to a good start was really pleasing. I’ve been praying to some sort of higher power for a bit of luck and I got it today.”
Renegades’ unlikely pursuit of the imposing target started poorly when English spinner Sophie Ecclestone, the world’s No.1 T20 bowler, sent Hayley Matthews and Courtney Webb packing early.
When Lauren Cheatle enticed Molineux to Stella Campbell at mid-off, the hosts were reeling at 5 for 38, before a WBBL record sixth-wicket stand of 81 off 52 balls between Carly Leeson and Rhiann O’Donnell gave them an unlikely sniff.
They were aided by a burst of shoddy bowling from Sixers after the drinks break, with Campbell sending down five straight wides to concede 22 off the 11th over and Perry carted for 24 off the 13th.
Perry made amends with a spectacular, high-leaping catch at cover to send O’Donnell packing, ending Renegades’ resistance.
Tags: Alyssa Healy, Carly Leeson, Melbourne Renegades Women, Sixers Wmn vs Renegades Wm, Suzie Bates, Sydney Sixers Women, WBBL