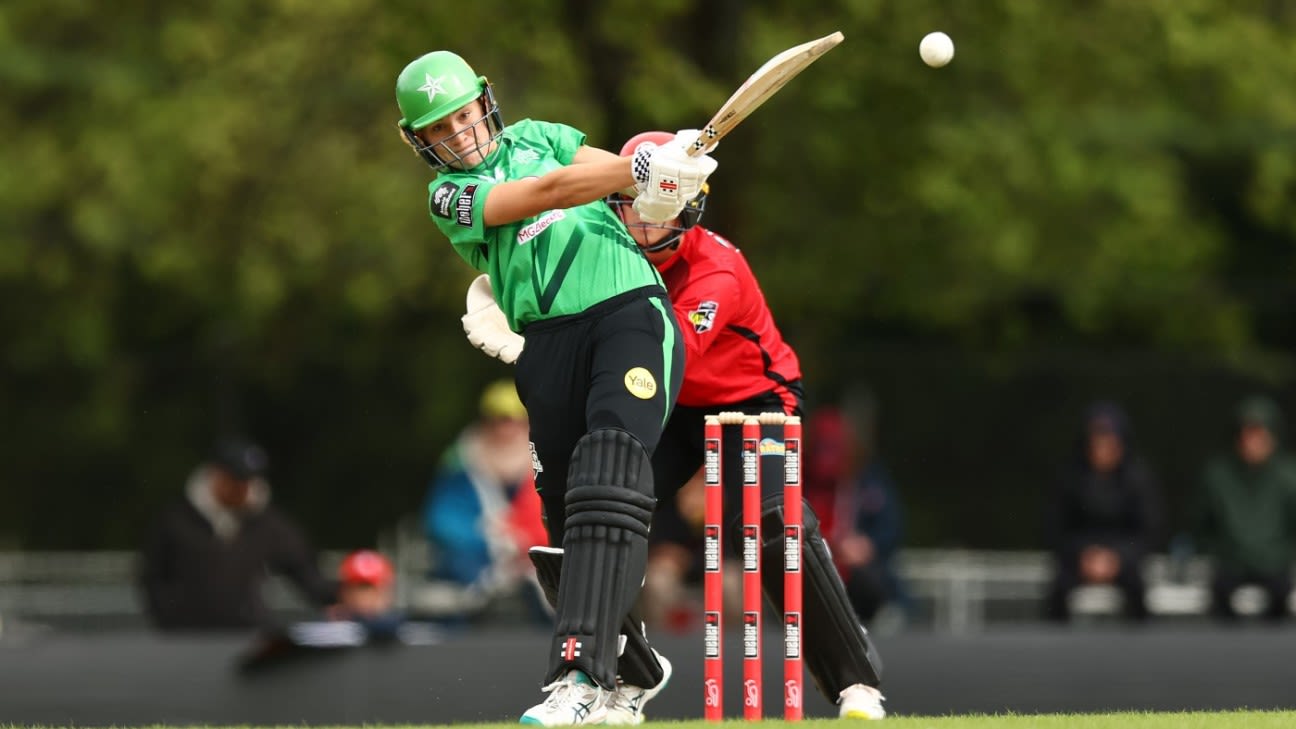 Melbourne Stars 92 for 4 (Sutherland 42*) beat Melbourne Renegades 91 (Day 4-19, Sutherland 3-17) by 6 wickets
Fine bowling efforts from Sophie Day and Annabel Sutherland set Melbourne Stars up for a six-wicket win over Melbourne Renegades, their first victory of the WBBL season.
Playing in Ballarat, Renegades batted first and were bowled out for 91 with one over to spare in an innings in which they struck just six fours.
Spinner Day and seamer Sutherland were the chief destroyers, setting Stars on the path to their first WBBL win over their crosstown rivals in almost three years. Day returned her best WBBL figures and Australian representative Sutherland bemused the batters with her short balls and changes of pace.
Sutherland also played a key role with the bat combining with English batter Alice Capsey in a third-wicket stand of 47. Stars lost both openers inside the first 3.2 overs, but Sutherland and the highly-rated teenager Capsey put their side back in control.
Capsey and Kim Garth were dismissed in successive overs, but Sutherland and captain Nicole Faltum steered Stars to victory with 15 balls to spare. They moved off the bottom of the table, jumping above Sydney Thunder and Renegades, with the latter dropping to last.
Earlier, Renegades struggled from the start, with captain Sophie Molineux caught behind for a golden duck off Garth off the second ball.
A second-wicket stand of 37 looked to have set a decent platform but Renegades lost 3 for 11. Among those dismissed was top scorer Hayley Matthews who looked good until she miscued and gave Sutherland a return catch. Renegades again looked to be rebuilding after a fifth-wicket stand of 25 but lost 6 for 17 with Day slicing through the lower order.
Stars suffered a blow in the third over when India batter Jemimah Rodrigues was run out after a mixup with her opening partner Lauren Winfield-Hill. Rodrigues was beaten by a throw over the stumps from Shabnim Ismail, who four balls later had England’s Winfield-Hill caught at second slip.
Tags: Annabel Sutherland, Melbourne Renegades, Melbourne Stars, Renegades Wm vs Stars Wmn, Sophie Day, WBBL