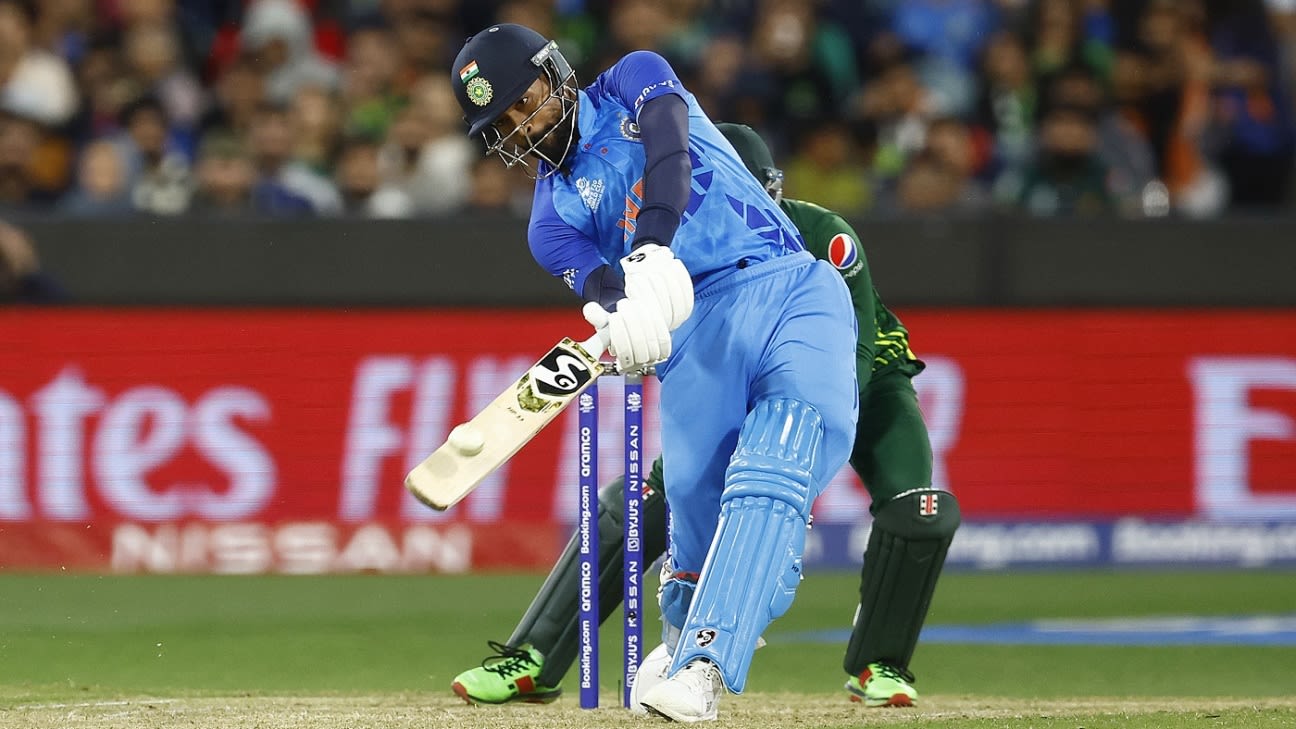 Resting and preserving players is not on India’s mind as they prepare to face Netherlands in their second Super 12s match at the SCG. For a side that lost Jasprit Bumrah on the eve of the tournament and whose allrounder has to be handled with care, this faith in everybody’s fitness is welcome news. India’s bowling coach Paras Mhambrey also suggested R Ashwin will be India’s main spinner more often than Yuzvendra Chahal because of his batting.
It would not have been a surprise if India had rested Hardik Pandya seeing how their next match is across the country in Perth and the turnaround is short. However, Mhambrey said Hardik is keen to play every game. “Hardik wants to play all the games,” Mhambrey said. “That is important. And we are not looking at whom to rest, there is no such thought about any particular player. Hardik is a very important player for us. He adds a lot of balance: he is both bowling and batting. Other than that, his attitude on the field is important. Like you saw in the last match, he played a crucial innings. Yes, Virat [Kohli] finished it off, but to recognise the fact that the pressure will shift to the opposition if the game goes deep, you need experience. So much of Virat’s performance’s credit should be given to Hardik as well. Rest is not even a discussion. Every match is important.”
Related
Mhambrey was pleased with the way Mohammed Shami has shaped up coming out of Covid-19. “It [his recovery] started off when he went to the National Cricket Academy (NCA),” Mhambrey said. “We wanted to have a look at how he felt, what shape he was in, assess the loads and numbers there. And whatever feedback we’ve got, we are pretty happy about it.
“He is a very experienced and seasoned bowler. You know what you are going to get from him, that’s sure. But the important bit was, how he turned up after the Covid. And we’re pretty happy with the recovery. At the NCA, whatever feedback and reports we’ve got, we’re pretty happy about it. Out here, he was in a good space. Whatever discussions we’ve had, he was looking forward to this tournament. And starting with the first over that he bowled in Australia, he looked in great rhythm. And that also gave us the confidence of knowing what you are going to get from Shami. He is a champion bowler, no doubt.”
Mhambrey was asked if Hardik’s presence might give them a reason to play an extra batter. “That will totally depend on the conditions that we play [in],” Mhambrey said. “It’s good that Hardik does give you that four-over option, and that’s what we wanted. He brings a lot of balance to the team once he does that. And he’s also been very effective for us. He’s picked up wickets and that’s very important for us. But having said that, getting a batter in or playing a different combination will purely depend on the team that we are playing and also on the conditions.”
Mhambrey: “The other thing which works in favour of Ashwin is that he can contribute with the bat”•BCCI
Speaking of combinations, the pre-tournament expectation was that Ashwin would play against sides that had left-hand batters in the middle order but Mhambrey said the offspinner’s batting tipped scales in his favour regardless, and that Chahal would get in when conditions demand an “additional spinner”.
“We are obviously looking at the balance of the team, the batters we are playing against,” he said. “You also got to look at your match-ups. There’s no particular conditions that you are going to look at, you don’t expect to have turning tracks over here. Maybe, you will have some tracks that will help a little bit of spin: we will look into it. We are playing in some of the games second [on a used pitch]. So as we go into the tournament, there will be a lot of wear and tear on those wickets. When we feel having an additional spinner will help, we will go for it.”
When asked what all they look at when they decide between the two, Mhambrey said: “We look at the batting combination of the teams we are playing. You do your own homework: which players are struggling, which type of bowlers their batters are struggling against. So that is one aspect. The other thing which works in favour of Ashwin is that he can contribute with the bat. So we will look at both these things.
“When you choose Ashwin, you look at what he brings to the team in terms of the balance and composition. But every venue poses a different challenge, every wicket will be different, and we might have to alter our combination by looking at that particular wicket. If need be, we can even play four or even five seamers. And we are quite fluid on that front.”
Tags: Hardik Pandya, ICC Men's T20 World Cup, India, India vs Netherlands, Paras Mhambrey, Ravichandran Ashwin

Sydney Thunder surge to the top with seven-wicket win