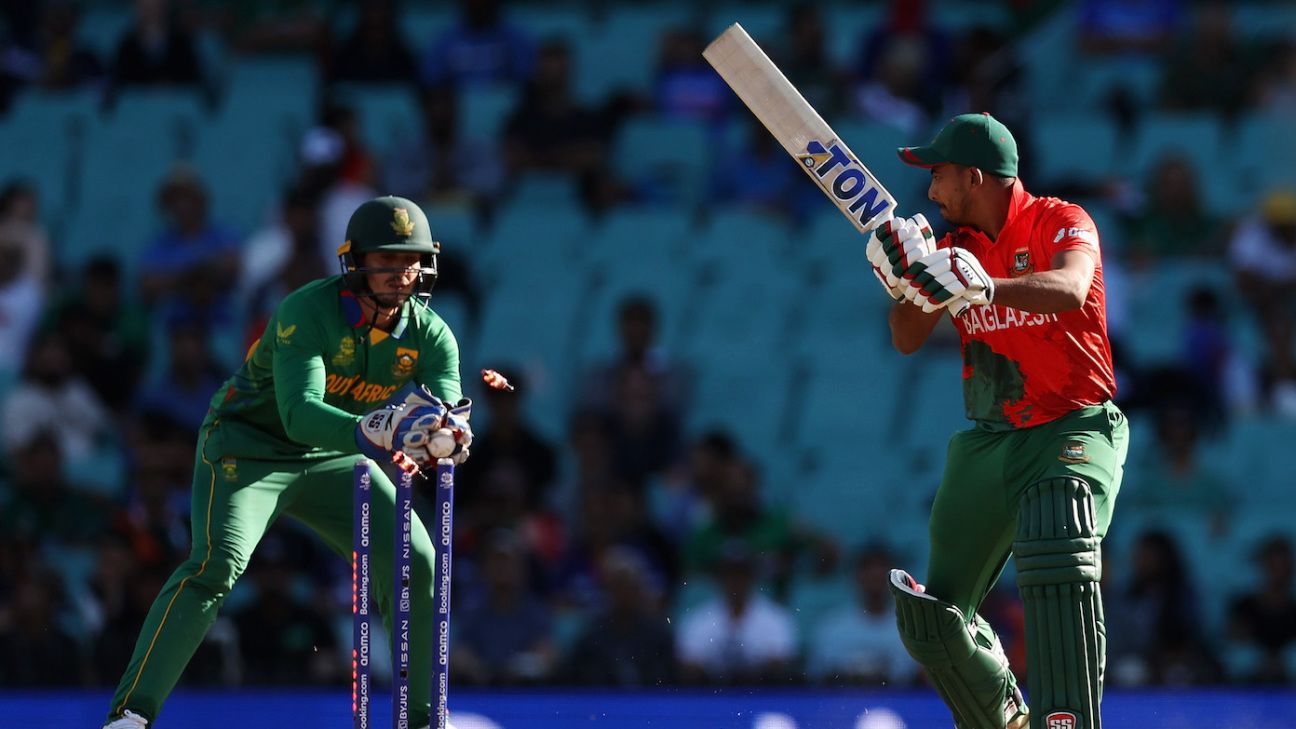 Jamie Siddons, Bangladesh’s batting coach, has implored the team to be “smarter” after their 104-run defeat to South Africa, and warned that they won’t be able to compete with the more powerful sides if they just try to copy their six-hitting.
Related
There was a brief flurry at the start of their steep chase at the SCG when Soumya Sarkar twice lifted Kagiso Rabada over the leg side for six, but when he fell, the batting slumped in a heap for 101 all out in 16.3 overs. It was a stark contrast to the display from Rilee Rossouw and Quinton de Kock who struck 11 sixes between them.
Siddons conceded a chase of 206 required an aggressive approach but said that the Bangladesh batters had resorted to slogging without putting enough thought into their innings. And though Anrich Nortje started the damage with two wickets in his first over, then finished with four, there were also four wickets for South Africa’s spinners.
“We aren’t big six-hitters, we need to be a lot smarter,” Siddons said. “We hit the ball in the air way too much. The message was, go out there and bat, see how we go, we had a great start then everyone just wanted to hit the ball in the air. And that put us all under pressure.
“We got out to spin. It wasn’t the pace. There was pace out there from one bowler, the rest it looked like we were managing quite nicely when we were playing good cricket shots. Then we turned to slogging, that’s not our game. We can’t do that.
Mosaddek Hossain became Keshav Maharaj’s first victim•Getty Images
“Our tactics have got to be a lot different to what Rossouw, de Kock did. We aren’t going to win too many matches trying to hit a lot of sixes. Rossouw just clears the fence without even trying, that’s not something we have the ability to do. He mis-hits sixes.”
However, Siddons was adamant that Bangladesh had made strides in their T20 batting, noting improvement in the powerplay and remained convinced that if they can bat first and make 160 it will be very competitive.
“We did some really good things in New Zealand in the lead-up, good things in the UAE,” he said. “Our first thing was to address our starts and we’ve done that really well. The first six overs have been addressed, now we are looking at 7-15 which we are not doing great.
“But we’ve been scoring 160-170, [we had a] little hiccup in the last game and today was disastrous and has set us back a little bit. 160 will win most of our games, I stand by that. But we’ve got to get 160 first.”
He also admitted that the Bangladesh batters had found it tough adjusting to conditions, although that blame is hardly at their door: before this tournament, they had never played a T20 in Australia.
“It’s totally different to what we practice, play and grow up on,” Siddons said. “We found Hobart really fast for our batsmen, they were getting hurried, by not such fast bowlers, and today we had guys bowling 145-150kph. That played a part, but the two shots [in the third] over they were just bad shots, nothing to do with pace.”
Tags: Bangladesh, ICC Men's T20 World Cup, Jamie Siddons, South Africa vs Bangladesh