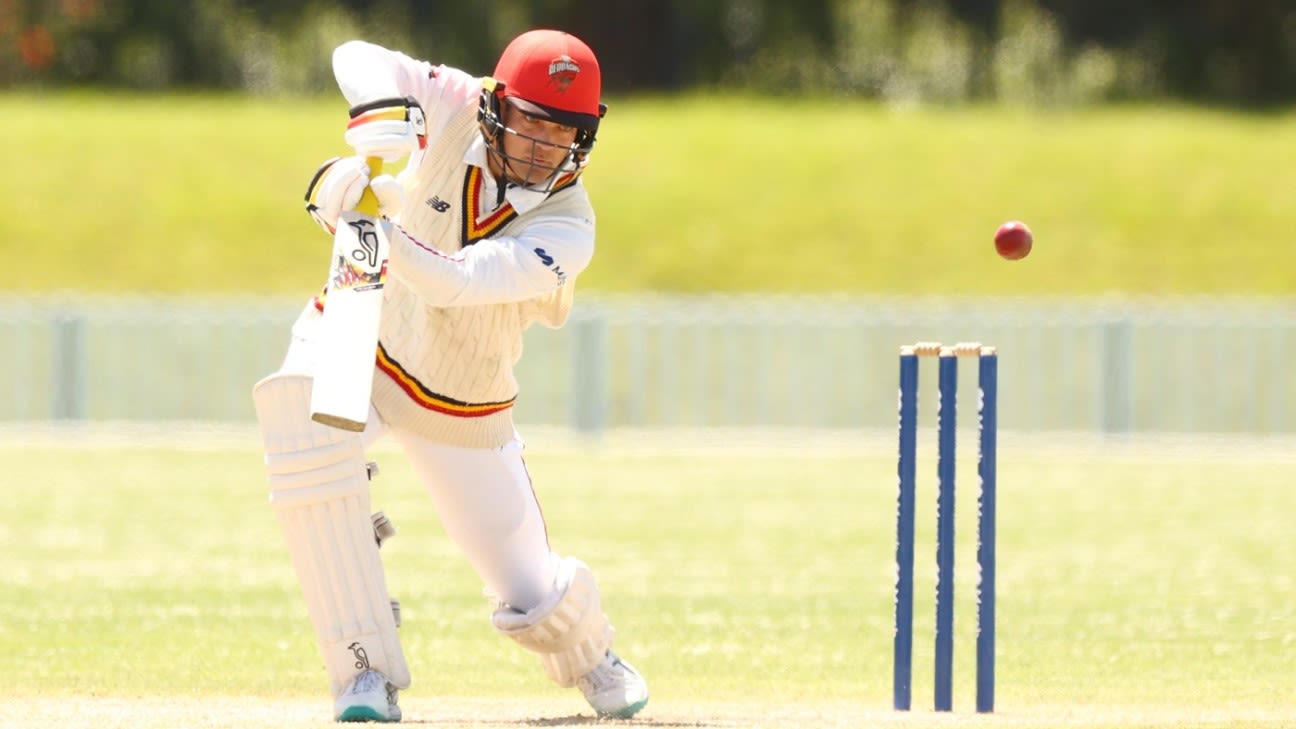 New South Wales 5 for 389 dec & 3 for 35 (Agar 2-12) lead South Australia 311 (Carey 64, Agar 57, Dwarshuis 3-44, Lyon 3-69) lead by 113 runs
South Australia have pried the door open for a potential Sheffield Shield comeback against NSW, claiming three late wickets before stumps on day three to keep all results alive.
Struggling to avoid the follow-on at one stage when they slumped to 8 for 229 in reply to NSW’s 5 for 389 declared, the Redbacks managed to scramble their way to 311.
Wes Agar then struck twice and Nathan McAndrew once to leave NSW 3 for 35 at stumps, still with a lead of 113 and with both teams able to press for a win heading into the final day.
Ultimately NSW were left to rue Moises Henriques putting Brendan Doggett down at first slip on two before he made 49 as part of an 80-run ninth-wicket stand with Ben Manenti. At that point the Redbacks still needed 6 runs to avoid the follow-on.
“It could have gone either way, that gets taken and who knows where we are this afternoon,” Doggett said. “But we managed to make the most of the situation and get ourselves in the position to win this game.”
The late revival will also have put a smile back on captain Travis Head’s face, after his lean run to start the summer continued in Wollongong. He was caught at first slip for 8 on Wednesday when he swung hard at a wide ball from Liam Hatcher and toed it to Henriques.
It means the Test incumbent’s run of scores to start the Shield this summer stands at 76, 6, 5, 0 and 8, while also failing to pass 50 in three one-day games.
Head has credits in the bank and is by no means under pressure to hold his spot for Australia’s first Test against West Indies in Perth on November 30.
The left-hander was player of the season in last summer’s Ashes win, hitting two centuries and averaging 59.5 while batting at No.5. But he would no doubt like to find some runs before the start of this summer’s Tests, after also enduring tough tours of Pakistan and Sri Lanka earlier this year.
Head will either feature in up to two more Shield games before the first Test or potentially link up with Australia’s 50-over team for a three-match series against England.
After Head fell in the midst of a collapse of 4 for 56, Alex Carey looked superb for SA, cover-driving Liam Hatcher for four three times in one over before going caught behind trying to hook the quick.
Agar had earlier provided the morning spark for the Redbacks as nightwatchman with his maiden first-class half-century, before he swept Nathan Lyon to a man in the deep on 57.
Tags: Alex Carey, Brendan Doggett, New South Wales, NSW vs South Aust, Sheffield Shield, South Australia, Wes Agar