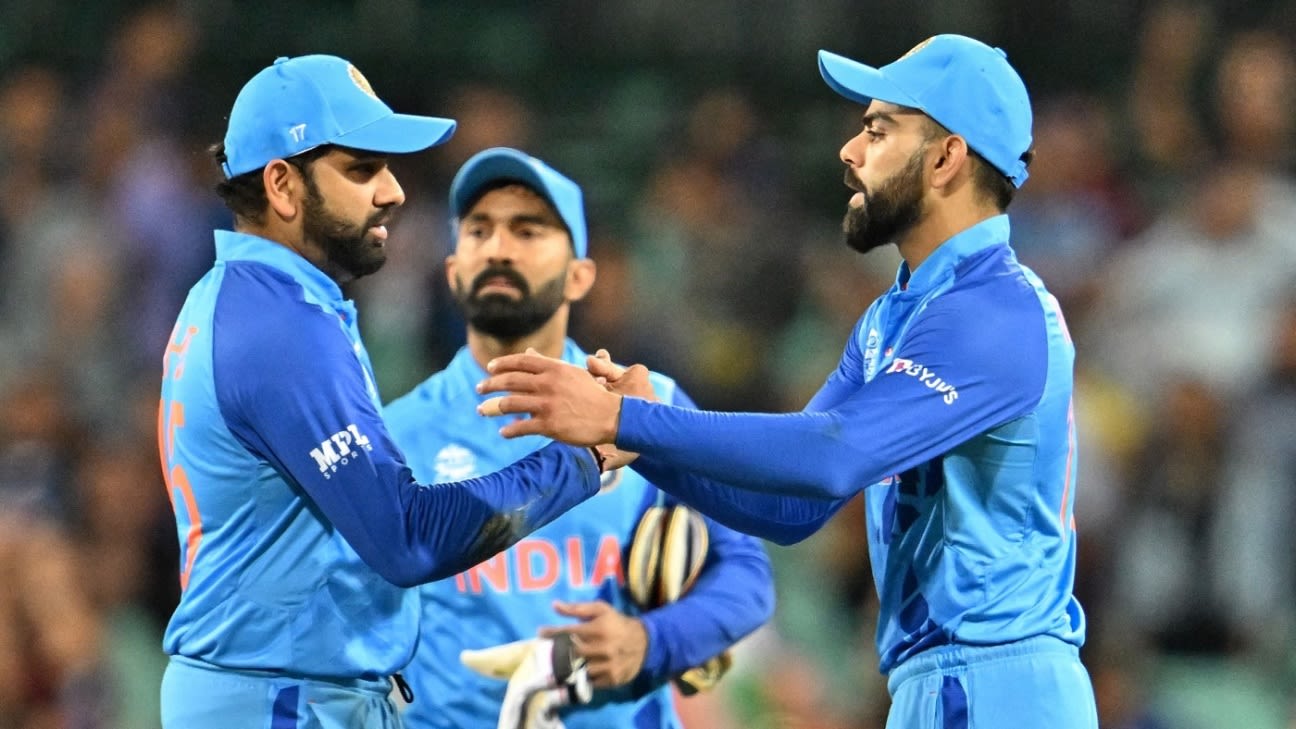 Week one of the T20 World Cup is done and the pace has been set. India have taken the early lead, despite logistical challenges (cold avocado sandwiches, anyone?) with South Africa and Zimbabwe in the chasing pack. Sunday will be telling for Group 2, with all six teams in action and a top-of-the-table clash as the main course when India play South Africa on a pacy pitch in Perth.

On paper and recent form, you would say India are favourites. They have had the better of South Africa in previous tournaments and outplayed them in a series just before this one with pretty much the same team. But something seems to have changed from the South African side that sometimes looked like it was simply going through the motions earlier this month. There’s a hunger, and like India, they probably need more than some soggy bread to satiate it.
Although their batting was curtailed when the skies opened in Hobart, their intent is clear: go hard and bat big. They are the only team other than New Zealand to score more than 200 so far, but they will be aware that both their games have come against teams ranked below them in this format. The tougher challenges are yet to come. India and Pakistan’s attacks are going to ask questions of South Africa’s approach and they will need to make sure they have answers at the ready. They will also trust that their pace pack can be similarly threatening, and live up to their reputation as among the best combinations in the tournament.
India’s have already gone some way to doing that, when they tied Pakistan down in what became a statement-win thanks to a batting performance that screamed self-belief. They followed up with a clinical performance against Netherlands and, importantly, have not had to contend with any rain. Yet, South Africa would have been on the same number of points as India had they been able to complete their match against Zimbabwe and now they find themselves playing a little bit of catch-up to ensure they make the knockouts.
India will be aware of their slim advantage and will want to maximise it with a win over South Africa, to make next week a little easier for them. They’ll still want to win at least one more game to make sure their destiny is in their own hands, and with Bangladesh and Zimbabwe to come, will back themselves to do so. So while India will want to win this contest, South Africa almost have to, to avoid making their other big match, against Pakistan, a do-or-die contest.

Virat Kohli needs 28 runs to break Mahela Jayawardene’s record for the most runs in T20 World Cups, after going past Chris Gayle in the previous match. He already has the most fifties in T20 World Cups, double Jayawardene’s six and three more than his captain Rohit Sharma, and there’s every reason to believe he will add to that number. Kohli has been in sensational form in the tournament so far, with his match-winning knock against Pakistan already the stuff of legend. The biggest stage is clearly motivating him to put on his biggest performances and he will know another significant contribution will go a long way to sealing India’s place in the knockouts.

Rilee Rossouw is only the second player to score back-to-back T20I centuries, after Gustav McKeon from France, and now he has the opportunity to score successive tons against India too. Rossouw’s first T20I hundred came earlier this month, against in Indore, four innings after he struck an unbeaten 96 against England in Cardiff. He followed up with an emotionally-charged 109 against Bangladesh and has now scored more runs in T20I cricket in 2022 than he did in 2014, 2015 and 2016 (his previous international stint) combined. With scrutiny on Temba Bavuma’s lack of form, Rossouw is making sure South Africa’s top order still succeeds.

India have played the same XI in both their matches so far and may not have reason to change a winning combination.

India (probable): 1 KL Rahul, 2 Rohit Sharma (capt), 3 Virat Kohli, 4 Suryakumar Yadav, 5 Axar Patel, 6 Hardik Pandya, 7 Dinesh Karthik (wk), 8 R Ashwin, 9 Mohammed Shami, 10 Bhuvneshwar Kumar, 11 Arshdeep Singh
Despite being key players, Temba Bavuma and Tabraiz Shamsi’s spots could be in question•ICC via Getty
South Africa are likely to leave out one of their specialist spinners to bring back a fourth fast bowler, and it could be Tabraiz Shamsi to miss out with Keshav Maharaj capable of doing the holding job in the middle overs. Lungi Ngidi sat out in Sydney and could return but they may also toy with the idea of unleashing left-armer Marco Jansen, either instead of Ngidi or in place of fellow allrounder Wayne Parnell. That’s the easy bit as far as their team selection is concerned. The more difficult question is whether to drop underperforming captain Bavuma for the in-form Reeza Hendricks at the top of the order. There are as many reasons to make that call as there are not to, and South Africa may just give Bavuma another match to find his rhythm.
South Africa (probable): 1 Quinton de Kock (wk), 2 Temba Bavuma, 3 Rilee Rossouw 4 Aiden Markram, 5 David Miller, 6 Tristan Stubbs 7 Wayne Parnell/Marco Jansen, 8 Keshav Maharaj, 9 Anrich Nortje 10 Lungi Ngidi, 11 Kagiso Rabada

It is looking tasty for the quicks with pace, bounce and early swing on offer and both attacks will want to caution against getting carried away. While the strip looks green, this will be the second match on the ground on the day, following Netherlands vs Pakistan. Doubtless, they will look at the mistakes the Pakistan seamers made early on in their match against Zimbabwe, when they started off bowling too full. Hard lengths are the way to go in Perth. And that’s not the only challenge for batters. On a big outfield, finding the boundary takes some extra muscle so turning ones into twos and twos into threes is crucial. The average first innings score is 143 and 200 has only been breached at this venue once, when England played Australia three weeks ago. There was rain around on the day before the match but don’t push the panic button just yet. Despite cloud cover on game day, the chances of rain are no more than 14% through the afternoon and dwindle to just 4% by the time the first ball is scheduled to be bowled.

“The conditions are different…but we pride ourselves on being able to adapt, and that is what good international teams should be able to do anyway, so looking forward to playing in these conditions, and let’s see how the game goes.”
India’s batting coach Vikram Rathour explains how the team is embracing changing conditions around Australia.

“Most of our guys are also used to conditions in Australia. We come from South Africa. It’s mostly difficult batting conditions. Lots of bounce at some of the stadiums. So we are sort of used to the conditions, and as bowlers, we’ve obviously played in it as well.”
Australia is more than 10,000km away from South Africa but the distance doesn’t mean a difference in conditions, according to Anrich Nortje
Tags: ICC Men's T20 World Cup, India, India vs South Africa, South Africa