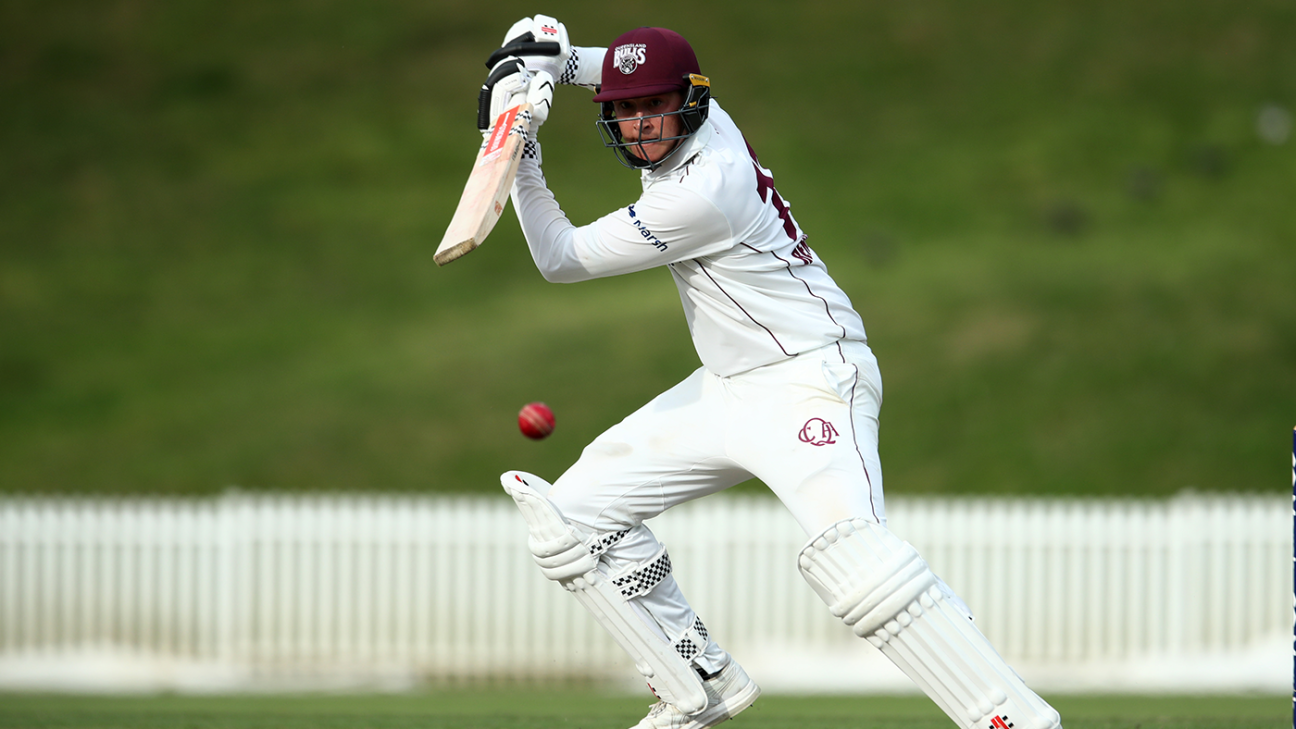 Queensland 4 for 219 (Renshaw 86*, Khawaja 53) trail New South Wales by 27 runs
Matt Renshaw dropped anchor with a statement innings for Queensland as New South Wales’ bowlers toiled on day two of their Sheffield Shield clash.
The former Test opener reminded selectors of the patience and shot selection that rocketed the teenager into the Test frame in late 2016, batting through the day to be unbeaten on 86 off 276 balls at stumps.
Renshaw, now 26, has been returned to the top of the order by captain Usman Khawaja, who is batting four for Queensland despite his own incumbency as Australia’s Test opener.
Related
Since losing his Test spot Renshaw has expanded his strokeplay, finding success in the middle-order after Khawaja had replaced him in a juggle designed to rekindle his own international prospects.
The left-handed Renshaw played within himself all day, leaving well and leaning on anything too straight in an innings reflective of the type that first fired him into the Test arena.
Wicketkeeper Jimmy Peirson was energetic in the final hour in backing up his season-opening century.
Khawaja was in excellent touch before a loose sweep off Nathan Lyon ended his innings early in the final session.
Renshaw was perhaps lucky to survive the day, with the umpire’s benefit of the doubt saving him after replays suggested he should have been run-out at the bowler’s end by a firm Peirson straight drive.
Sean Abbott had taken the scalps of Joe Burns and Marnus Labuschagne – the latter with a fine yorker – before lunch to give NSW a sniff. But there was little on offer beyond that.
“It’s hard work for the bowlers,” Lyon said of the conditions. “[I’m] trying to think a bit more on my feet, but it’s challenging.”
Joking that Thursday’s advice would be to bring a set of cards to serve them during likely rain delays, Lyon did save some praise for Renshaw.
“His best position is up the top of the order, that’s just my opinion,” he said.  “It’s good to see him back up there and a good step forward for Matt.”
Khawaja said he was happy with the day’s efforts considering the scoring difficulties.
“You can’t get ahead of yourself; if you force it that’s when you get out,” he said I felt good, felt really good last week, and disappointed not to get more. It’s a tough grind, [Renshaw] played with discipline and played some beautiful shots.”
Tags: Matt Renshaw, Nathan Lyon, New South Wales, NSW vs Queensland, Queensland, Sheffield Shield, Usman Khawaja