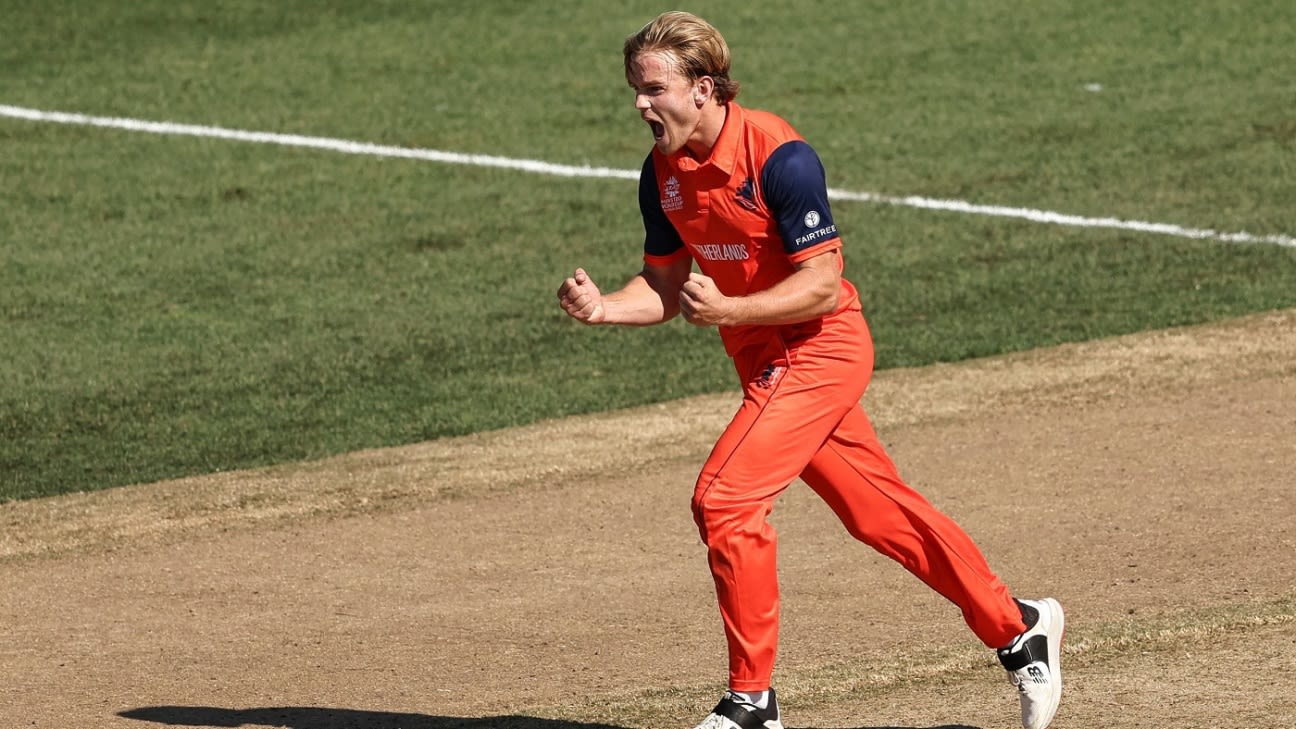 Thursday will be the first instance of India and Netherlands contesting in a T20 international. While India will enter as clear favourites, they will also be the first to point out the danger that Scott Edwards’ team poses. Netherlands are the only Associates in the Super 12s. They have worked hard to earn their place and now their players want to enjoy playing alongside the big boys, a long-cherished dream. India, Pakistan and South Africa are in their group, and the Dutch want to ensure they push themselves to create an upset.
Exposure – that has been the catchphrase Associate coaches and players have holding up outside the gates of the ICC and bigger countries. Playing better teams will make them better has been the punch line. And Netherlands have proved that this season: in 2022 they have played ODI series against England, New Zealand, Pakistan, West Indies and Afghanistan along with the twin T20Is against New Zealand as well as the T20 World Cup Qualifier in Zimbabwe before arriving in Australia.
Related
Equipped with that experience, Netherlands believed they could beat Bangladesh in their first Super 12 match on Monday and nearly achieved that aim, if not for a couple of unnecessary run-outs, the reason behind the eventual nine-run defeat. Netherlands know India are on a whole other level and on an almighty high after a dramatic win against Pakistan. While their bowlers have executed the plans every match, Netherlands’ batting has been a virtual one-man show named Max O’Dowd. He needs support from Vikramjit Singh, Colin Ackermann, Tom Cooper and Edwards.
The Netherlands captain could tell his players, ‘we have nothing to lose so let’s just enjoy’. Such an attitude, Paul van Meerkeren, Netherlands’ strike bowler, said, has the potential to help players raise the performance bar. And given their history of shocking big teams at T20 World Cups – England in 2009 and 2014 – India will want to be on high alert.
Bas de Leede has been turning a lot of heads at the T20 World Cup•AFP/Getty Images

As a captain Rohit Sharma has been loud, clear and fearless. He is one of the best tacticians in the game and is more than capable of thinking on the fly too. But Rohit the batter has been flying low recently: in his last five T20Is, Rohit has scored just 64 runs including two ducks at a strike rate of 103. This dip in form is in contrast to the stroke-filled 46 he hit against Australia in the rain-shortened match in Nagpur which earned him the Player-of-the-Match award. His last fifty came in a losing cause, seven matches ago, against Sri Lanka, in the Asia Cup. Rohit knows he needs to dictate with the bat and show consistency.
Multiple World Cup-winner Ricky Ponting likes to keep an eye on young talent and he thinks Netherlands allrounder Bas de Leede has something special about him. Ponting feels de Leede has the tools to grow bigger, and his local BBL team Hobart Hurricanes could be thinking about having him on their roster. Other T20 franchise scouts have also tracked de Leede, who was recently picked up by MI Emirates for the inaugural season of the International League T20, starting in the UAE from January 2023. De Leede, who is 22, was also Player of the Match in Netherlands’ two victories in the first round of this World Cup and their second-highest run-maker in the World Cup Qualifiers that preceded it.

New Zealand blasted 200 in the tournament opener at the SCG on Saturday. So it is fair to expect runs to flow once again. There was some threat of rain, but it looks pretty clear on match eve.

“The discussion we always had was every game in a tournament like this is important. Yes, the first game [was against Pakistan and] we knew the hype around it. We knew it’s always going to be a high intensity and big clash, but having such games done and dusted in the first phase itself, it’s good. Had this game been maybe the third or fourth game, it would really sometimes take that effect on the following games, but having this game out of our group, it’s good.”
India bowling coach Paras Mhambrey on coming back after a high-intensity match
“Yeah, it’s huge. You always dream of playing World Cups, and the SCG is one of the most famous grounds in the world. And then add in you’re playing against arguably one of the best teams in the world, yes, it’s pretty surreal. The boys are looking forward to it.”
Netherlands captain Scott Edwards on how keen his team is to face India.
Tags: ICC Men's T20 World Cup, India, India vs Netherlands, Netherlands