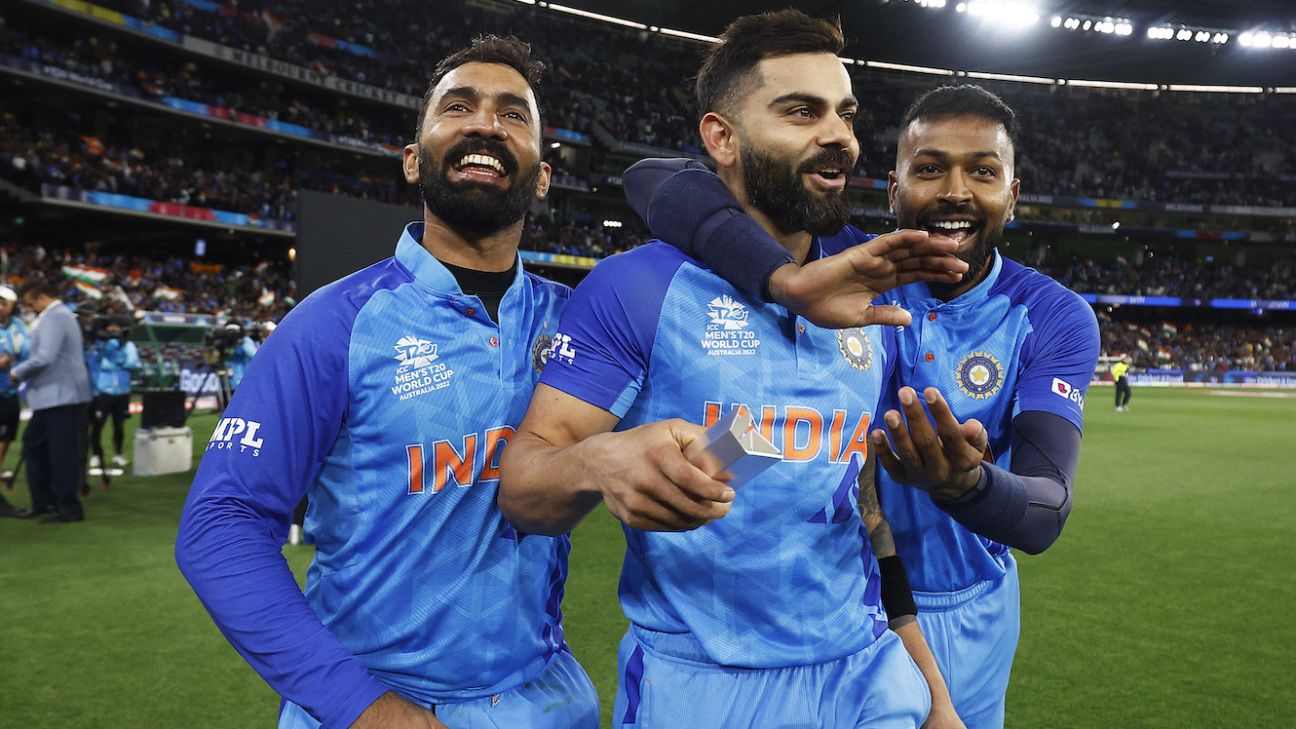 Hardik Pandya, Virat Kohli’s partner in the century stand that rescued India and set them up for their grandstand finish against Pakistan at the MCG, knows first hand why Kohli’s epic role in that finish was “so special”. It was because of all the hard graft the pair had to do to get the innings back on track from the depths of 31 for 4 in a chase of 160.
Speaking with Kohli on the BCCI’s website after the game, Hardik said Kohli’s two sixes to finish the 19th over against Haris Rauf was something only he could do, given the situation and given the conditions. “Those two shots – I knew how important those two shots were. Let’s be honest, even if you [looking at Kohli] had missed one, they were running ahead of us.
“I’ve hit a lot of sixes but those are special, special, and really special in my heart now because of what [it] meant for both of us. I’ve played cricket, so much cricket, but I don’t think anyone could’ve played those two shots except Kohli.
“The best part about what I loved about him [doing that] is we struggled, bro. Why it was so special was we struggled together. This would’ve been not this special if we had just cruised through. You would have played exceptional shots, I would have been [in the flow]… This was special because we knew we’d struggled.”
Dinesh Karthik, Virat Kohli and Hardik Pandya soak in the atmosphere at the MCG•ICC via Getty Images
When Hardik walked in in the seventh over, India had lost KL Rahul, Rohit Sharma, Suryakumar Yadav and Axar Patel. They needed 129 runs from 83 balls – asking rate over nine. There was only Dinesh Karthik, R Ashwin and the fast bowlers to follow. The asking rate would rise to over 11 as the partnership went the next 24 balls without a boundary.
In the 11th over, the tempo briefly changed. It started with a Hardik straight drive off legspinner Shadab Khan, before the left-arm spin of Mohammad Nawaz was dispatched for three sixes in six balls, two by Hardik, one by Kohli. But again, India managed only three fours off the next five overs, and it was 48 off 18 and then 28 off eight before Kohli went bang, bang against Rauf.
Related
Hardik was out one ball later, for 40 off 37, before Kohli and Ashwin got the job done. Coming into the game and the innings, Hardik said he could sense tension all around, but he was just “happy to be here”, having struggled with injury issues over the past couple of years, and overcome questions of whether he would ever bowl again following back surgery.
“I sensed a lot of pressure in the group,” he said. “With all due respect, a lot of people in big games [feel pressure] and [know] how important it is. We all have worked every hard as a collective, and people are happy for each other.
“But for me, I don’t know, I was very numb today. Even when I came on the ground, I was very happy and I was speaking to Rahul [Dravid] sir as well initially, I wouldn’t say he was tense but he told me: ‘you have done a lot of things’, and ‘be calm’ and all that. I had to tell him: ‘sir, please understand I’m happy to be here. Ten months back, I was working in my space and I had no idea and this is where I wanted to be, irrelevant of what happens. Just happy to be here, playing with all the best cricketers in the world, and they are my brothers.
“The quality of relationship that I have with this group is something I cherish and always cherish. When I was coming inside [to bat], I would have taken a bullet for you [Kohli] at that point of time, I would not have let you get out at that point of time. My goal was simple: whatever I can to make your life easy [do it], because you have done this over the years in crucial games. No one is better than handling pressure than you.”
Tags: Hardik Pandya, ICC Men's T20 World Cup, India, Pakistan vs India, Virat Kohli