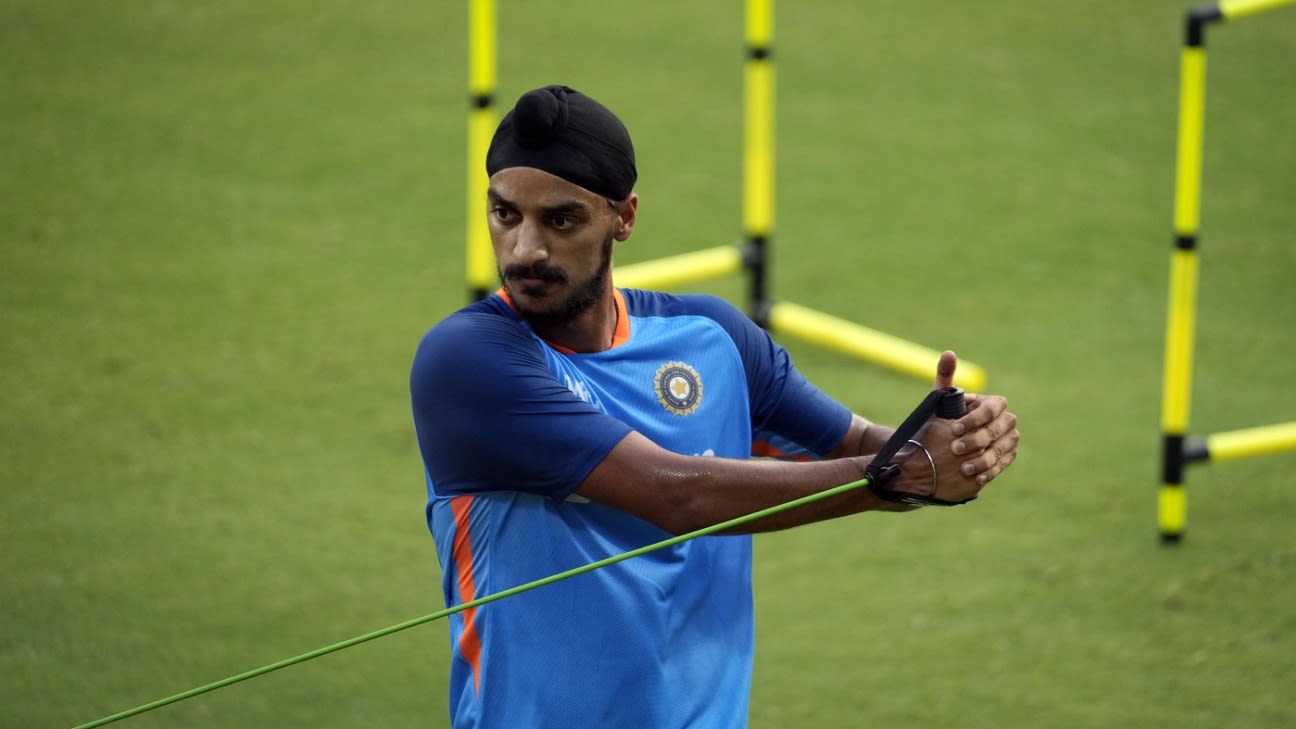 Anil Kumble is so impressed with Arshdeep Singh that he expects the left-arm quick to follow in the footsteps of Zaheer Khan and “do some wonderful things for India”.
After having excelled in the IPL for Punjab Kings, while Kumble was the coach there, Arshdeep seamlessly transitioned into India’s T20I side, and in their T20 World Cup opener against Pakistan at the MCG on Sunday, he took 3 for 32. That included the wicket of Babar Azam with his first ball. Arshdeep’s spell helped India keep Pakistan to 159 for 8, which they chased down off the last ball.
“I was really impressed with Arshdeep, how he’s come through,” Kumble said on ESPNcricinfo’s Open Mic programme. “I worked with him for three years and I could see the kind of development that he has had in the T20 format, and last year’s IPL was a classic example of how he handled the pressure.
“He perhaps bowled the tough overs for the team and yeah, you don’t always look at the wickets column in the T20 game, you look at what moments the bowler comes up with. And the temperament that he’s shown, it’s wonderful. We saw that again in the India-Pakistan game. When you have 90,000 people at the MCG, it’s always challenging.
“So yes, Arshdeep has certainly matured and I’d like to see him carry on. Probably what Zak [Zaheer Khan] did for India, I expect Arshdeep to go on to do some wonderful things for India.”
2:48

Kumble: Arshdeep has transformed as a very mature bowler in their last three years

Jitesh Sharma, another Punjab Kings player, has the game to slot in as India’s finisher in T20Is once Dinesh Karthik is done, according to Kumble, who also worked with Jitesh when they were part of the Mumbai Indians set-up. In IPL 2022, Jitesh struck at 163.63 and, more recently in the Syed Mushtaq Ali Trophy for Vidarbha, he has lifted that strike rate up to 188.60.
“Jitesh is someone I rate really, really highly,” Kumble said. “He’s a wonderful cricketer. He’s very mature. He has done all the hard yards in domestic cricket. He can hit the ball, not just off the spinners but off the fast bowlers as well. He is someone who can hit off the back foot and he is someone who I think can do that finisher’s role for India. If not now, he should be looked at post this World Cup when the selectors sit down to look at the next lot of cricketers, I’m sure Jitesh’s name will already be there.
“He does a finisher’s role. My take on T20 cricket is about specific roles that they play for their teams. And Jitesh, I know he started off as an opener, but he’s currently in a finisher’s role. He bats at No. 5-No. 6. And that’s the kind of thing you need to do. If you look at stats, then you’ll pick up the top two batters which are generally the openers or No. 3. They end up getting all the numbers in T20 cricket, but Jitesh, in his role has done exceptionally well.”
When asked which team had the best bowling attack in the ongoing men’s T20 World Cup, Kumble picked Pakistan, who have Shaheen Shah Afridi, Haris Rauf and Naseem Shah as the frontline quicks.
“Pakistan certainly have the best pace-bowling attack, for sure,” Kumble said. “They lacked the allrounder that Australia have. Australia have, overall, a good attack, in terms of having options. India certainly has good spinners. If you ask me, I think Pakistan have the best fast-bowling attack.”
Tags: Anil Kumble, Arshdeep Singh, ICC Men's T20 World Cup, India, Jitesh Sharma, Pakistan vs India, Punjab Kings