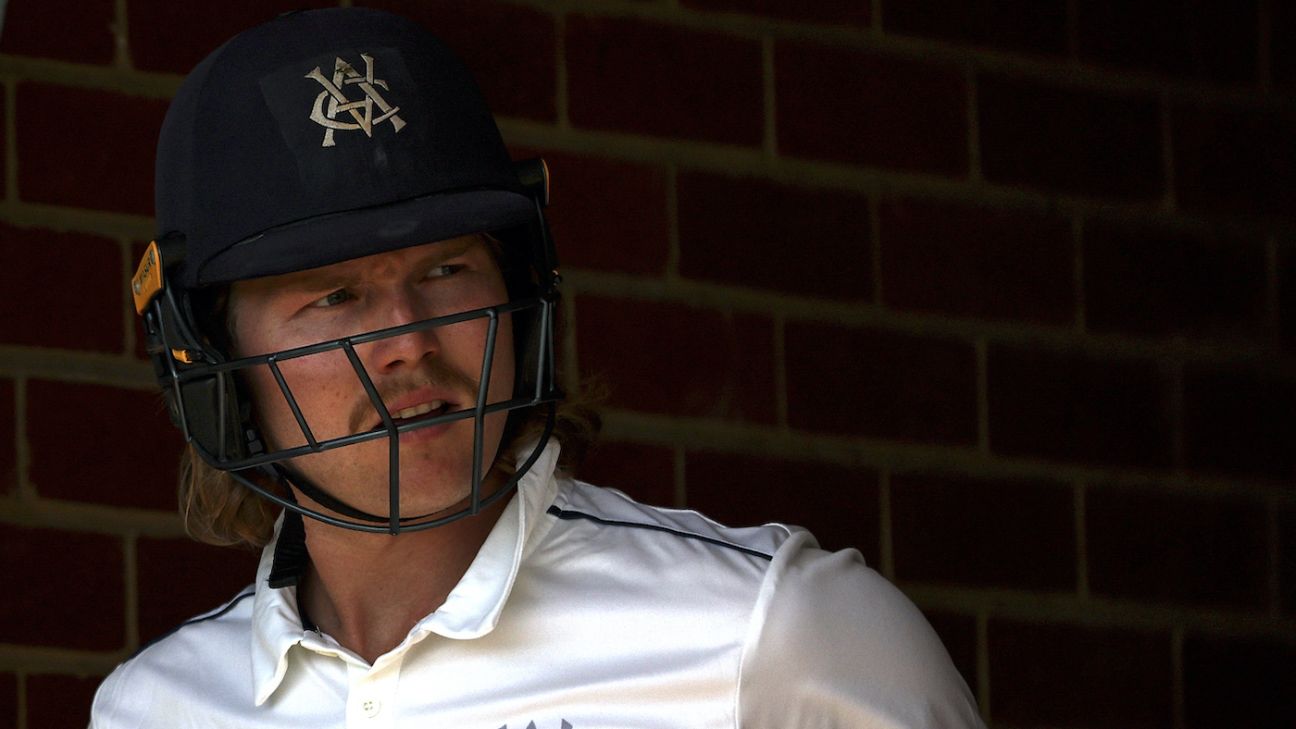 Will Pucovski has taken an indefinite leave of absence from cricket for personal reasons that are unrelated to his repeated concussion troubles over the years.
Pucovski played in Victoria’s first two Marsh Cup and Sheffield Shield games of the new season earlier this month, but he did not play in the last two Marsh Cup games against Western Australia and Tasmania and has not been named in the Sheffield Shield side that will face Tasmania in Hobart on Saturday after requesting for – and being granted – leave.
The leave is understood to be similar to that of Meg Lanning. Pucovski’s leave is indefinite with no timeframe on when he is likely to return.
Related
Cricket Victoria released a statement on Thursday saying they would continue to provide all necessary specialist support to Pucovski and asked that his privacy be respected during this time.
“Player welfare is always our top priority,” Cricket Victoria general manager of cricket performance Graham Manou said. “We’ll continue to work with Will to ensure he gets the support and space he needs and welcome him back when he’s ready.”
Manou spoke on RSN radio on Friday and detailed that there had been signs that Pucovski had been struggling.
“In terms of preparation for him and our group in general we had our psych [psychologist] in Adelaide for the first Shield game and there were a couple of warning signs there,” Manou said. “Then during the Shield game against WA a few things came to a head for Will. As he has been throughout, he took another courageous decision to take a little bit of time out from the game to prioritise his health.
“At Cricket Victoria we’ve got a fantastic psychologist in Mary Spillane who has been working closely with Will and our playing group both male and female.
“He’ll seek a little bit of extra support over the next few weeks just to give him some additional and some specialist work to help him develop some coping mechanisms.
“The most important thing is that through this process we’re actually setting him up for life well beyond cricket.”
Pucovski, 24, has taken leave from Victoria for personal reasons several times in his short career. These have been separate from his absences because of concussion, concussion-related issues and his shoulder injury.
Pucovski’s previous breaks from the game that weren’t related to his physical injuries had come prior to his Test debut in January 2021. He took a break following his first Shield double-century in October 2018 and then took another break after being called up to the Australia squad in February later that summer for a two-Test series against Sri Lanka. In November 2019, he made himself unavailable for Test selection after playing for Australia A.
But since playing his only Test match, his breaks have been mainly down to physical issues. He dislocated his shoulder in that Sydney Test against India and needed a reconstruction that ended his season. In October 2021, he was concussed while batting in the nets. In February this year, on return from that concussion, he suffered concussion-like symptoms in a game against South Australia and required a break but was later cleared of formal concussion from that incident.
He had been optimistic about his physical health ahead of this summer. He made a half-century in last season’s Sheffield Shield final and another in his first game of the season against New South Wales. He had travelled to India in the off-season to train at the MRF Pace Academy in Chennai with a select group of young Australian players with an eye towards Australia’s future tours to the subcontinent.
Tags: Australia, Victoria, Will Pucovski