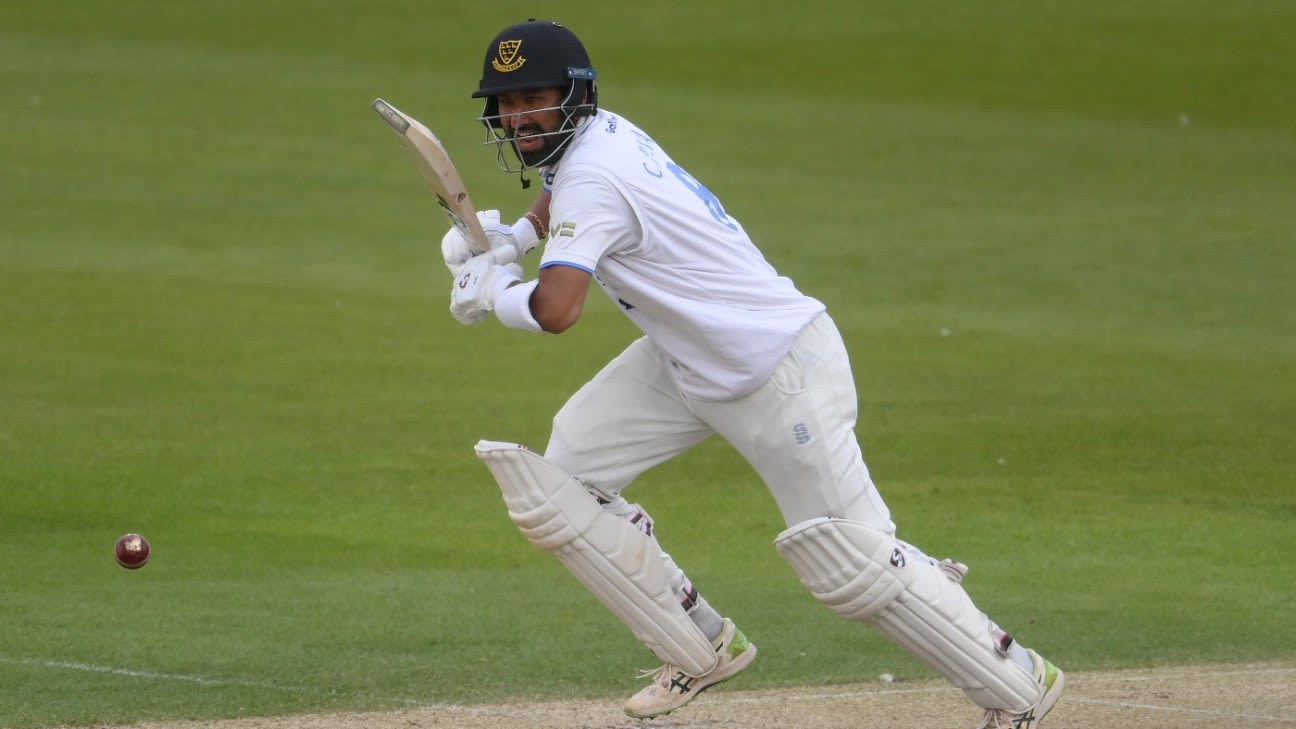 Cheteshwar Pujara will return to Sussex in 2023 after making a significant impact during his first season with the club this year.
“I am glad to be back with Sussex for the 2023 season,” Pujara said in a statement released by the club. “I thoroughly enjoyed my last stint with the club last season, both on and off the field and I’m looking forward to contributing to the team’s growth and success in the coming year.”
Pujara made Sussex his fourth county after previous spells with Derbyshire, Yorkshire and Nottinghamshire, and made eight hundreds – including three doubles – for them across formats. He was their leading run-scorer in Division Two of the County Championship, with an aggregate of 1094 at 109.4 across 13 innings, and was the second-highest scorer across the 50-over Royal London Cup, making three hundreds as Sussex reached the semi-finals. He also deputised as captain.
Sussex did not specify in their statement which formats Pujara would play, or for how long, but his availability will be dictated by his involvement in India’s Test squad and, possibly, the IPL. The club later clarified that they expect him to play Championship and 50-over cricket for them and added that he is due to arrive in time for the start of the season.

“We all saw the class he showed with the bat and his performances, but he was also outstanding in our young dressing room as a world-class role model for them to follow”
Keith Greenfield, Sussex’s performance director

Pujara remains an important part of India’s Test plans, top-scoring with 66 in their most recent game in the format against England in July. Their Test schedule is relatively sparse in 2023, but they are due to play a two-match series away against West Indies in July-August.
He has not played an IPL game since 2014 but was part of Chennai Super Kings’ squad in 2021, and would miss the first two months of the county season if picked up in December’s auction.
Keith Greenfield, Sussex’s performance director, said, “It is fantastic news that Cheteshwar will be returning in 2023. We all saw the class he showed with the bat and his performances, but he was also outstanding in our young dressing room as a world-class role model for them to follow.”
Sussex are in the process of recruiting a new coach after Ian Salisbury left at the end of the 2022 season. James Kirtley acted as T20 coach throughout Salisbury’s tenure, but the club will return to a single head coach from 2023.
Tags: Cheteshwar Pujara, India, Sussex