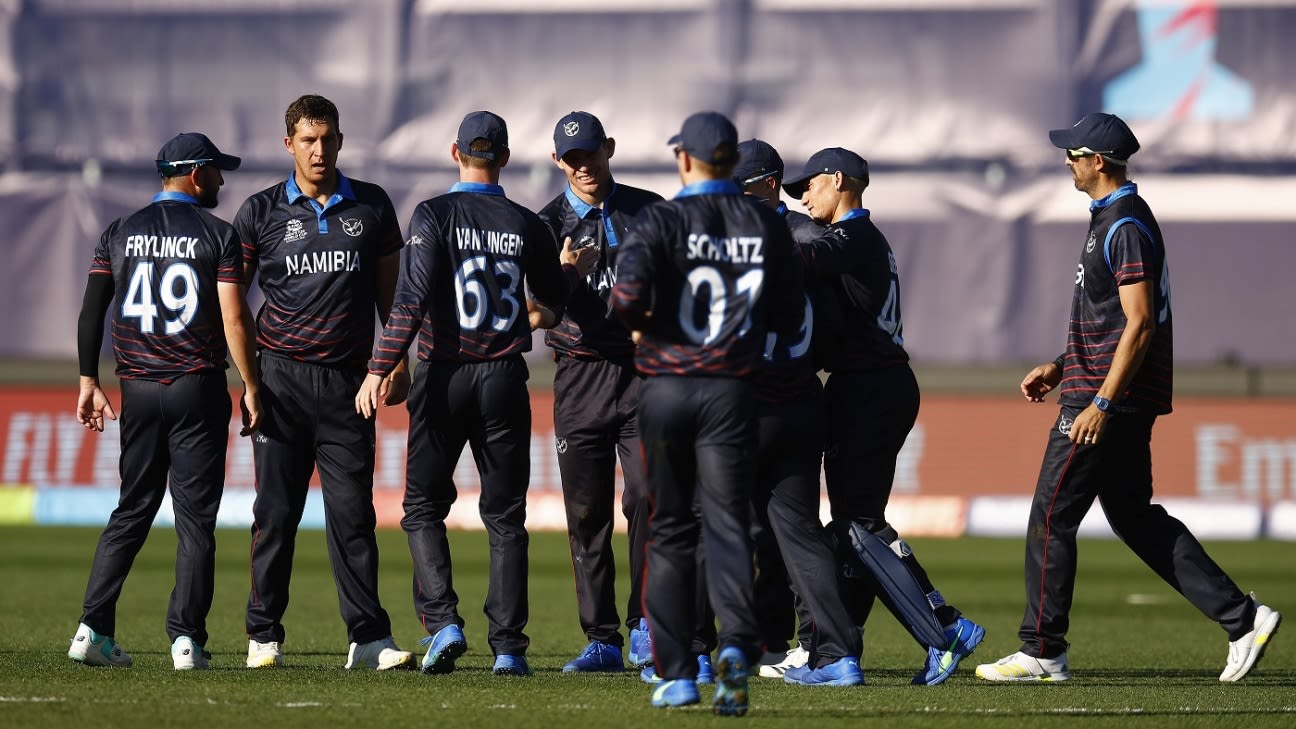 Namibia and UAE have played each other five times in international cricket, all since 2020 and most recently in August when they played a two-match ODI series. But none of those games will have been in the cricketing world’s spotlight as much as the one they will play on Thursday in Geelong: a win will put Namibia in the Super 12s of the Men’s T20 World Cup. Facing a relatively familiar opponent in the high-profile clash will help, both camps said.
“I think it’s always something that we try and use – a bit of analysis how other teams play, so definitely something that we’ll be looking into and just an added advantage against the other side that you’re playing against, having seen more or less all of their battles before,” Namibia captain Gerhard Erasmus said. “All the batters say that they’ve got a fresh side, so we’ve got some work to do to be properly prepared for that game.
UAE’s Aryan Lakra said that his team, which has lost both games so far, needs to execute their plans better to do well against Namibia.
“Definitely Namibia has been playing some good cricket, upsetting Sri Lanka, but at the end of the day it’s the game of cricket. The team which plays better cricket is going to win. We have played against Namibia so we know their batters, bowlers. It’s all about coming up with a good plan and trying to execute it to its best.”
Namibia stunned Sri Lanka in their first game, lighting up the tournament’s opening day, before losing to Netherlands. Erasmus said they were mentally ready for the Netherlands game despite the big result first up, but things just did not go right for them.
“I think our preparation was really good for the Netherlands game, and I think we had all the right plans, and unfortunately I just didn’t think it was our day yesterday. I think we got outplayed. I think they really bowled well in certain overs and phases of the game. We [saw] how tough a wicket it was to score on, and we stuck to sort of what we know, which is a good fight for 40 overs long, and we made it a very close game.”
For 20-year-old Lakra, there’s the added thrill of playing against cricket’s big boys. “Definitely I think it was a great honour presenting the country in a World Cup, and I know the results [so far] didn’t go our way, but definitely a lot of things to learn, and a lot of things to take back from this tournament, and hopefully we come back strong the next time.”
There has however only been a moment of massive joy for UAE, when Karthik Meiyappan became the first from his country to take a T20I hat-trick. Meiyappan and Lakra have been friends for a long time, and they celebrated the achievement with other close friends in the team, Alishan Sharafu and Vriitya Aravind, late into the night.
“Definitely that was surreal for us because the four of us, we have been playing cricket together for so long, so if anyone does well, we all feel proud,” Lakra said. “And definitely a hat-trick in a World Cup against a Test-playing nation is a huge deal, and we couldn’t be happier for him. We have been talking about it all night and we still cannot believe it.
“We are just so happy that a friend of ours who we have seen grow through the ranks, who we have seen as a 14-year-old, growing to be a 20-year-old, getting a hat-trick in a World Cup. That’s definitely a huge deal, and we are really, really happy for him.”
Tags: Aryan Lakra, Gerhard Erasmus, ICC Men's T20 World Cup, Karthik Meiyappan, Namibia, U.A.E. vs Namibia, United Arab Emirates