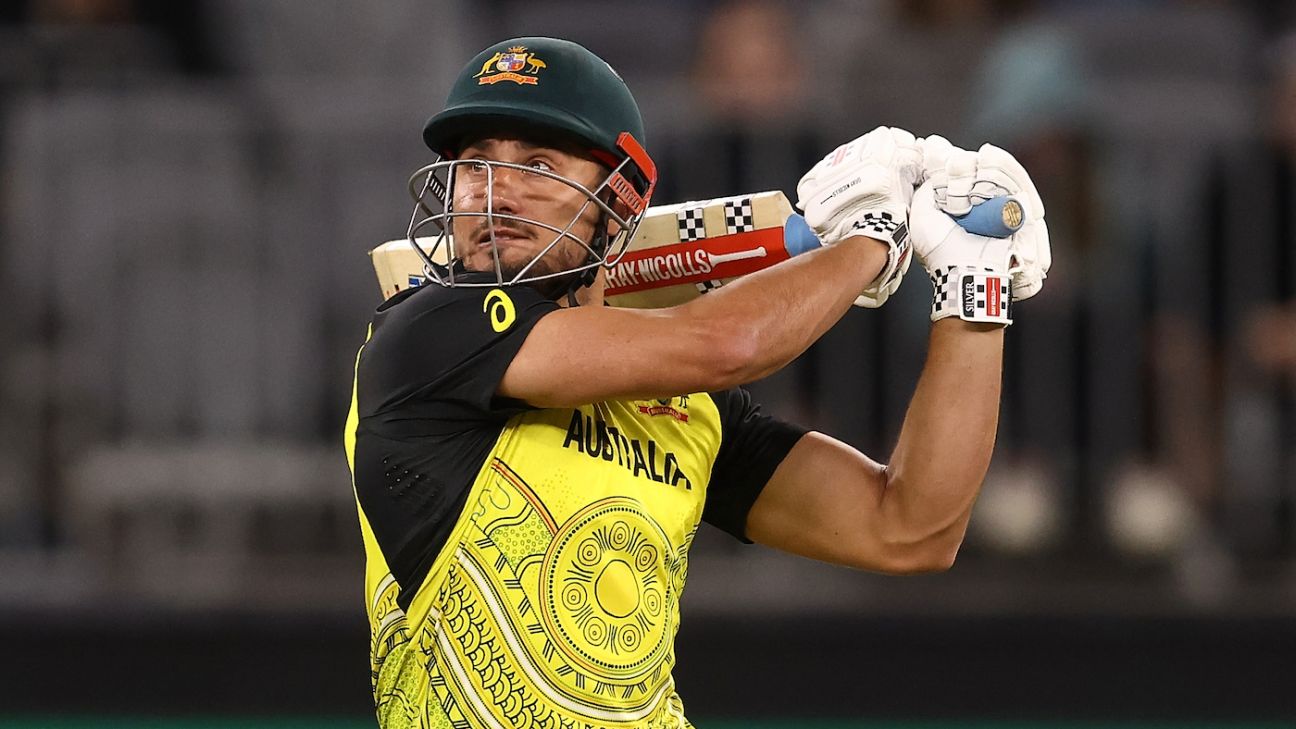 Australia 158 for 3 (Stoinis 59*, Finch 31*) beat Sri Lanka 157 for 6 (Nissanka 40, Asalanka 38*, Starc 1-23) by seven wickets
A spectacular display of thumping-the-daylights-out-of-a-cricket-ball from Marcus Stoinis took a tense game and made it a cakewalk. Australia needed 69 off 46 balls when he walked in, and there was potential for this to be a low-scoring thriller.
But then the man muscled six sixes and four fours in an 18 ball innings, in which he basically bullied every ball he faced. He hit Australia’s fastest T20I half century, off 17 deliveries, and ended up making 59 not out, at a strike rate of 328.
Thanks mostly to him, and a little to Glenn Maxwell who hit 23 off 12, Australia not only claimed their first victory of the Super 12, they also reversed some of the damage to their net run rate that New Zealand had inflicted in their first match. They are back up to -1.555 now, with some of the traditionally weaker teams still to play.
The Stoinis blitz

It happened so quickly. The man hit three fours off seamers from his first six balls, though two of these were fortunate edges. But then the sixes began to rain down off the spinners, and you knew the man meant business. He monstered Wanindu Hasaranga twice over the general cow corner region. Perhaps even more impressively, he hit Maheesh Theekshana for three sixes, crashing him over long on, over extra cover, then down the ground, to finish.
Stoinis made sure that Australia hit 20 off that over, the the 16th of the innings. This is no joke, but Theekshana had completed just three runs off his two previous overs.
He’d hit one more six, off the pace of Kumara this time. But this is after he’d set an Australia record for fastest fifty. This was a game-breaking performance, after he’d bowled two half-decent overs for 17 runs.
Charith Asalanka gave the Sri Lanka innings some impetus•ICC via Getty
Hasaranga gets taken apart

Australia clearly had a plan to go after Hasaranga. In an era in which they were more abrasive, they might have called this “cutting off the head of the snake” – i.e. taking down the opposition’s best. Between Mitchell Marsh, Maxwell, and Stoinis, Hasaranga was clattered for five sixes and two fours, and so blasted for 53 runs off three overs.
Hasaranga’s game is partly built on not being hittable on slower, lower tracks. But he doesn’t have a lot of experience on the quicker, bouncier ones such as in Perth. You would usually expect him to hit back at an assault. He didn’t have answers today.
Sri Lanka didn’t nail their batting either

Sri Lanka’s top order found the extra bounce on this pitch hard to contend with. Pathum Nissanka produced a modest innings – 40 off 45, that featured plenty of plays and misses and balls that hit the high part of his bat.
None of the other top order batters really seemed to have a measure of the surface and Australia’s pace, aside from Charith Asalanka, who came back to form with a 38 not out off 25 balls. Chamika Karunaratne’s 14 not out off seven balls helped too.
Finch’s terrible outing

While Nissanka is just making his way, Australia captain Finch produced an even worse innings, struggling to 31 off 42, sometimes putting his team’s cause at risk. He was not out at the end alongside Stoinis. But he put real pressure on his fellow batters, and was visibly frustrated during parts of this innings.
Tags: Australia, Australia vs Sri Lanka, ICC Men's T20 World Cup, Sri Lanka