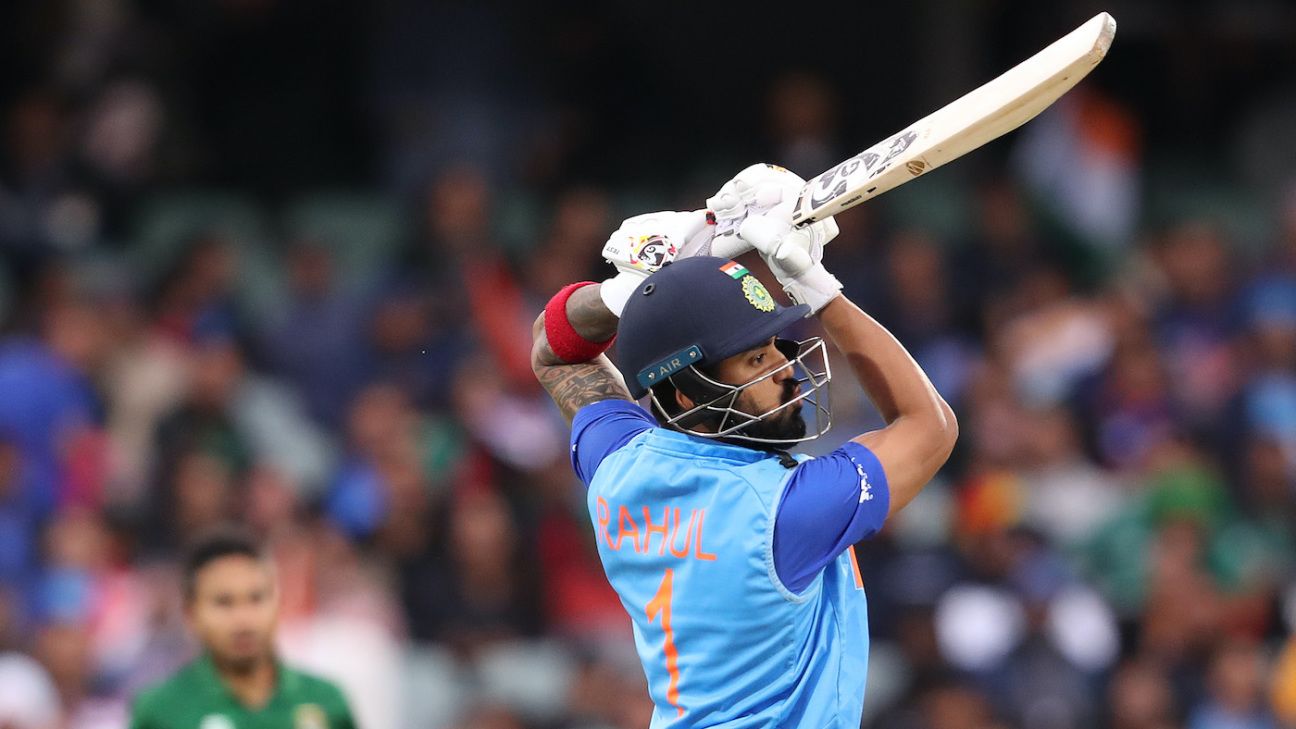 A day before India’s game against Bangladesh, coach Rahul Dravid spent a majority of his press conference repeating his and Rohit Sharma’s unconditional and unequivocal support for the struggling KL Rahul, who had scored managed single-figure scores in three innings. Dravid said he was fine with Rahul’s intent because the conditions had been difficult, but also said that he expected Rahul to respond accordingly if he came across a 180 pitch. It turned out India just about scraped through with 184, and that was built on an aggressive start by Rahul, who scored 50 off 32.
Rahul spoke glowingly of the captain Rohit and the rest of the team management for supporting him through this phase. “We have all said this a lot of times before as well that this is where the support staff plays an important role in creating that environment where a player feels comfortable, confident and there is no doubt about his ability or what he brings to the team,” Rahul said. “And they have kept that environment really, really balanced all the time whether we do well or don’t do well. We always stay balanced.
“The support staff has been really supportive. The captain has always backed his players. And you can see that. That’s why players – even when we have had a couple of tough innings – we find a way to come back and do well for the team. It is something you work on as a team. There are things you work on as an individual that help you but these are things that as a team you work on. The support staff, the coach, the captain, when they show confidence and faith in you, it gives you that confidence as a player that you will get the backing if you are going in the right direction.”
Related
That Rahul was not showing the intent to score boundaries led some to believe he had been low on confidence, but Rahul said that wasn’t the case. “I was obviously disappointed at having not contributed for three games,” Rahul said. “That is the only doubt in your mind but you don’t – at least I didn’t – get frustrated. I didn’t feel like my form or my confidence was low. I just didn’t get the runs. It happens in the game. You are not always going to keep scoring runs. It’s what you feel. If you are feeling confident, then you know a good innings will come and it’s around the corner. I knew that in my heart that I was seeing the ball well. My processes were right. I knew a good knock or a good contribution for the team is coming.”
Rahul said he can stay balanced in his emotions no matter how the end result in terms of number of runs is. “My emotions were good,” Rahul said when asked of where he had been emotionally during and after those three low scores. “I am excited to be here. It’s obviously a huge opportunity for all of us. And we have all looked forward to the World Cup for the last 10 to 12 months and worked really hard as individuals and as a team.
“And yeah I was still relaxed. I have always tried to be as balanced as I can as a person whether I do well, whether I don’t do well. I try to judge myself on whether my mindset is right or whether I am trying to do the role and responsibility that the team expects me to do. If I think I am doing that well, I can go to sleep peacefully.”
That Rahul has helped India survive a banana peel on the way to the semi-finals should definitely help him sleep peacefully before India leave for Melbourne. Unless he gets too excited about the comeback.
Tags: ICC Men's T20 World Cup, India, India vs Bangladesh, KL Rahul