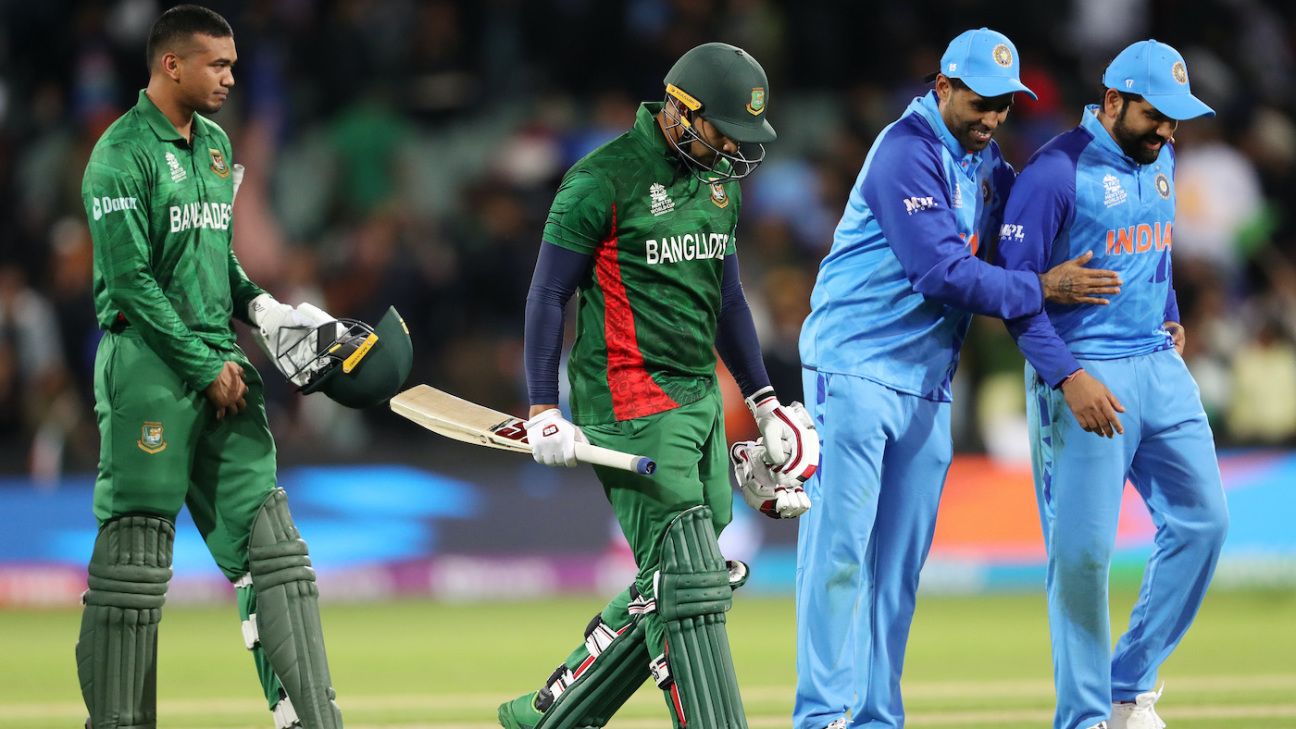 India 184 for 6 (Kohli 64, Rahul 50, Mahmud 3-47, Shakib 2-33) beat Bangladesh 145 for 6 (Litton 60, Hardik 2-28, Arshdeep 2-38) by five runs on DLS method
That Litton Das run out. How many people will be talking about it tomorrow? In Dhaka, in Chattogram, and in Sylhet. India had made a commanding total of 184 for 6, thanks mainly to a superlative return to the runs for KL Rahul (50 off 32), and another chapter in Virat Kohli’s spectacular form, as he made 66 not out off 44. Suryakumar Yadav’s 30 off 16 helped too.
But when Litton blasted seven fours and three sixes inside the first seven overs, Bangladesh had an excellent foundation. They were 66 for no loss when rains interrupted and curtailed the match. At that time, Najmul Hossain Shanto, Litton’s opening partner, was seven off 16.
They should have been confident of scoring the 85 needed off the last nine overs (54 balls) upon resumption, particularly as the field was likely to be greasy following the downpour. But when Shanto called for a tight second, two balls into resumption, Litton’s spikes failed to adequately grip the damp surface he was running on, and he was out by a about a metre to an outstanding Rahul direct hit, from just beyond midwicket.
Bangladesh lost their way after that, even if they rallied slightly towards the end to keep the last over interesting. They lost six wickets for 40 runs, in 33 deliveries. Nurul Hasan did his best to perform a miracle, but his 25 off 14 was not enough. Arshdeep Singh delivered excellent yorkers at the death, and India secured a hard-fought five-run victory, which took them to the top of Group 2.
Related
Litton’s hope-giving barrage
Man really set Bangladesh up. Then got out in an incredibly frustrating manner, which he bore little blame for.
The game was on when he hit Arshdeep for three fours in the second over – the first past backward point, the second down the ground, the third crashed through extra-cover.
He kept nailing them. Bhuvneshwar Kumar got swivel-pulled into the stand beyond deep square-leg. Then, the best shot of the game, perhaps, came: Litton got low and scooped Bhuvneshwar over the shoulder for six in the bowler’s next over.
By the time the Powerplay ended, he had completed a 21-ball fifty, and Bangladesh were flying. After seven overs, they were 66 for 0 – 17 runs ahead of the Duckworth-Lewis-Stern par score, when the rains came down and forced a long break. Litton had 59 off 26 then.
But then, second ball after resumption, he ran a second upon his partner Shanto’s insistence, and he slipped on the now-damp surface, causing him to lose valuable metres. The direct hit from Rahul caught him a metre short. This was when the chase turned.
1:36

Moody: Litton aside, Bangladesh went about their power-hitting the wrong way

Rahul’s resurgence
He’d made three single-figure scores in a row, but given his half-centuries in the warm-ups, could you really call this a dip? Either way, Rahul smote two spectacular sixes in the powerplay to suggest he was never out of touch. The first was a languid pick-up shot over deep square leg off Shoriful Islam. The second – the best of them all – was a supremely timed square-cut off Hasan Mahmud that flew into the stands. He hit two more sixes later, and was out in the 10th over, having proven his worth.
Kohli’s anchor
If you’re going to drop anchor, this is the way to do it. You bat in your more-aggressive team-mates’ slipstream. And then you make sure you catch up. Even at the end of the 14th over, Kohli was 32 off 28 – not a particularly impressive score. But then where other anchor-role players frequently fail to kick on from here, Kohli excels at surging through the late overs. This time, he struck four fours and a six through the last six overs, to end up a strike rate of 145.45. This tournament, he has 220 runs at a strike rate of 144.73 and has been dismissed just once in four innings.
Bangladesh’s post-Litton fade
Before Litton was run-out, Bangladesh struck 67 from 43 deliveries, and they’d lost no wickets. In the 34 balls after he got out (not including the dismissal delivery), Bangladesh lost five wickets and made only 40 runs. This essentially, was where Bangladesh truly lost it – Arshdeep and Hardik Pandya bowling double-wicket overs.
Shanto tried to revive Bangladesh’s hopes, but India always seemed the likelier winner.
Tags: Bangladesh, ICC Men's T20 World Cup, India, India vs Bangladesh, KL Rahul, Litton Das, Virat Kohli