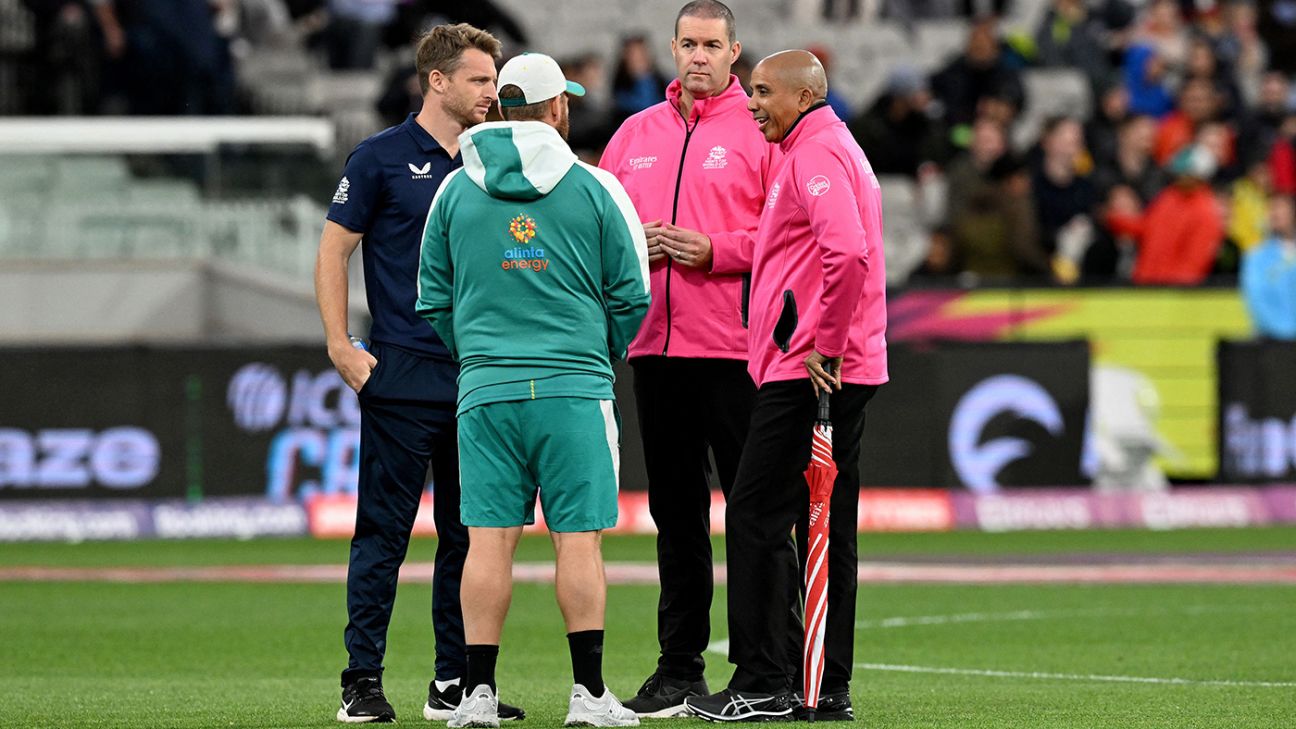 Australia vs England – match abandoned
Australia and England took a point each from their Group 1 match at the T20 World Cup after a wet, unsafe outfield led to their match being abandoned at the MCG. Both teams now have three points, after a win and a loss apiece in their opening two games.
As a consequence, Friday’s fixture between these two old rivals had been billed as a “loser goes out” encounter. Alas, following rain throughout the day and intermittent showers in the evening, the umpires eventually decided to call it quits at 8.49pm local time. Though well before the cut-off time, with the possibility of a five-over match provided play got underway at 10.04pm, there was no chance the ground would have dried in time given the cold evening conditions, particularly the bowlers’ run-ups which were a particular cause for concern.
Torrential rain over the last couple of days in Melbourne meant both sides came into Friday knowing rain would play a part. The first match of the day, between Afghanistan and Ireland, was also abandoned without the toss of the coin, so it was no surprise this fixture went the same way.
“The outfield has taken a drenching over the last couple of weeks, as wet as I’ve ever seen it,” Aaron Finch, Australia’s captain, said. “The run-ups and around the circle were very, very wet. It’s about player safety. We saw one of the Zimbabweans go down the other day (Richard Ngarava). If you’re trying to run out there, it’s going to be a real issue.”
An inspection at 7.30pm local time – 30 minutes after the scheduled start – came and went, with all but the cover across the square in place as the clouds held momentarily. However, surface water remained a concern with the drainage system and super-soppers working overtime.
An inspection at 8.15pm then gave way for one at 8.50pm. But before the latter took place, another shower prompted the umpires to call the match off, sending the 30,000 supporters who braved the elements on their way.
“Everyone was here to play, everyone was ready to go,” Finch added. “And there was a great turnout. It was disappointing not to get on but just the amount of rain Melbourne and the east coast of Australia has had over the last couple of weeks has been amazing.”
Finch also confirmed that Matthew Wade, who tested positive for Covid-19 and had to prepare in a separate changing room, had been due to make the XI had play got underway. “He had a few symptoms yesterday but today he just had a headache. But he was good to go.”
As it stands England move to second in the Group 1 standings by virtue of their +0.239 net run rate, ahead of Ireland (who beat them on Wednesday) and Australia, both of whom also have three points.
However, they also have the toughest run-in of the teams who could now finish on seven points, with New Zealand coming up in Brisbane on Tuesday (where further rain is forecast) followed by Sri Lanka the following Saturday. Although two wins would probably be sufficient to push England through to the semi-finals, Australia have contests against Ireland and Afghanistan to come in which they could yet improve their -1.555 net run rate.
New Zealand, meanwhile, can afford to lose to England and still qualify, if they can beat Sri Lanka and Ireland in their other two games. Ireland themselves and Afghanistan are still firmly in the running for the knock-outs too, with a single point separating all six teams.
Tags: Australia, Australia vs England, England, ICC Men's T20 World Cup, Matthew Wade