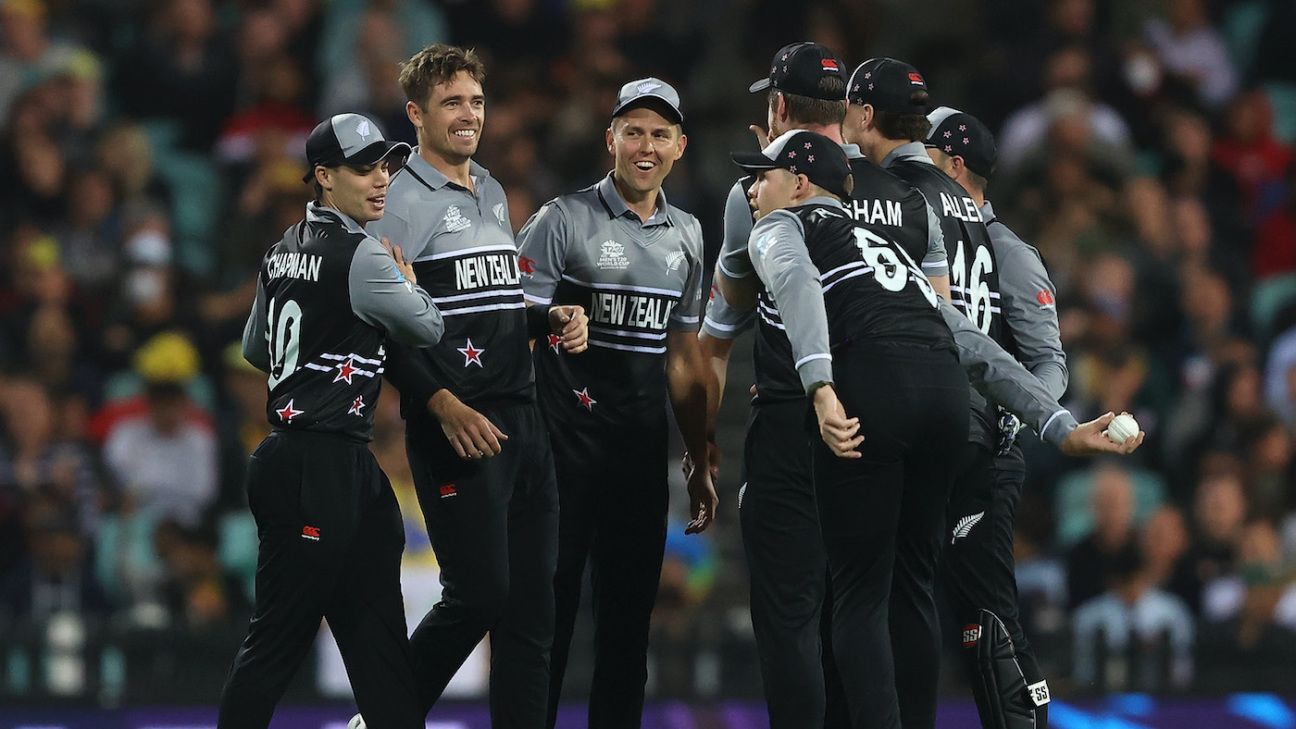 Finn Allen’s no-holds-barred assault, Devon Conway’s more measured 92 not out, James Neesham’s late blows, Mitchell Santner’s powerplay smarts, and timely strikes from the seamers formed the ingredients of a dominant opening victory for New Zealand on Saturday. It was so dominant that New Zealand’s net run-rate is +4.450, and the World Cup is already on the line for Australia.

Before the tournament, not many gave New Zealand a chance to put it past Australia. Before Saturday, the last time New Zealand beat Australia in the country was in a Test match in 2011, when Trent Boult made his international debut in Hobart. And the last time New Zealand beat Australia at the SCG was when Brendon McCullum made his ODI debut at the venue in 2002.
Related
In his first World Cup game, Allen unleashed McCullum-esque down-the-track swings, proving the fire to Conway’s ice. #MCGsobig, but Allen’s T20 mantra is simple: watch the ball hard, hit the ball hard. So watch out, Afghanistan.
Conway, who is arguably the best player of spin in the New Zealand line-up, will have a major role to play against Rashid Khan and co. again, having done so in the 2021 T20 World Cup in the UAE. New Zealand will be buoyed further by the potential return of allrounder Daryl Mitchell, who trained with the squad in the last couple of days as he works his way back from a finger fracture.
Afghanistan have also made good progress in T20 cricket – they now have Fazalhaq Farooqi and Naveen-ul-Haq to back up their spin trio of Rashid, Mujeeb Ur Rahman and Mohammad Nabi. All three spinners will dip into their Big Bash League (BBL) experiences, which captain Nabi alluded to during the pre-match press conference.
Afghanistan’s batting and catching, however, doesn’t appear as healthy. Against England in Perth, they subsided to 112 all out from 82 for 3 and then dropped Alex Hales twice during their defence. They can’t afford such slip-ups against a razor-sharp New Zealand side as one more defeat could push them closer to elimination.

Hitting sixes at the MCG is bloody difficult unless you are Virat Kohli. Afghanistan’s six-or-nothing batting template, which is fairly comparable to West Indies’, may not quite suit the conditions in Australia. This is where Ibrahim Zadran comes in as a key player on the batting front. Zadran isn’t a big hitter like Rahmanullah Gurbaz or Hazratullah Zazai, but has both the technique and temperament to construct or reconstruct an innings. The 20-year-old’s recent form is also encouraging: he has thirty-plus scores in each of his last five T20I innings.

Last weekend, Mark Wood exposed Afghanistan’s vulnerability against high pace and bounce. New Zealand will now unleash a fit-again Lockie Ferguson on them. There is also a case for them to pair up Ferguson with Adam Milne at the MCG. When Afghanistan faced New Zealand in the last World Cup, Ferguson, who was injured at the time, was only doing light training with Chris Donaldson. This is now his chance to stamp his authority on the T20 World Cup.

Afghanistan (probable): 1 Hazratullah Zazai, 2 Rahmanullah Gurbaz (wk), 3 Ibrahim Zadran, 4 Usman Ghani, 5 Najibullah Zadran, 6 Mohammad Nabi (capt), 7 Rashid Khan, 8 Azmatullah Omarzai, 9 Mujeeb Ur Rahman, 10 Naveen-ul-Haq/Fareed Ahmad, 11 Fazalhaq Farooqi
On the eve of the game, Trent Boult said Mitchell had the “determination” and “hunger to want to be out there”. Mark Chapman will likely make way for Mitchell, while offspin-bowling allrounder Michael Bracewell might have to wait his turn a little longer.
“Daryl has trained in the last two days and come through both fielding and batting really, really well,” head coach Gary Stead said on the eve of the match. “We will just wait and see how he scrubs up tomorrow morning just to make a final call but at this stage it’s looking like he will be available for selection. So, we will have a full squad of 15 players to select from.”
New Zealand (probable): 1 Finn Allen, 2 Devon Conway (wk), 3 Kane Williamson (capt), 4 Glenn Phillips, 5 James Neesham, 6 Daryl Mitchell, 7 Mitchell Santner, 8 Ish Sodhi, 9 Trent Boult, 10 Tim Southee/Adam Milne, 11 Lockie Ferguson

Nabi, who has played for Melbourne Renegades in the BBL, said he has never seen an MCG pitch so green. “Yes, at that time in Big Bash, it was drier,” Nabi said on Tuesday. “The ball swings early on for one or two overs, but after that it will be a little bit slower, [some] help for spinners, and the ball won’t swing that much.

“But here the pitch is new and also a little bit green. as well, and also the weather is cold.” If the India-Pakistan game was anything to go by, there could be some early swing, which would pique the interest of Farooqi and Boult. Both Afghanistan and New Zealand will have the benefit of watching what unfolds in the game prior to theirs, with Ireland facing England first up in the afternoon.
There is an 80% chance of rain on Wednesday, according to the Australian Government Bureau of Meteorology.

“Yeah, Southee and Boult, they are both good bowlers and also bowling-wise they use the conditions very well. They bowl swing and also they can bowl slow ones at the same time. Yeah, we all see the videos and everything, and also we discuss all these things.”
Afghanistan captain Mohammad Nabi is wary of New Zealand’s strike bowlers

“I’ve only played a handful of games really at the ‘G, but yeah, an amazing stadium. Obviously to get out there and be on the World Cup stage is going to be pretty special as well.
Trent Boult is looking forward to playing at what will be his home ground in the BBL
Tags: Afghanistan, Afghanistan vs New Zealand, Ibrahim Zadran, ICC Men's T20 World Cup, Lockie Ferguson, New Zealand