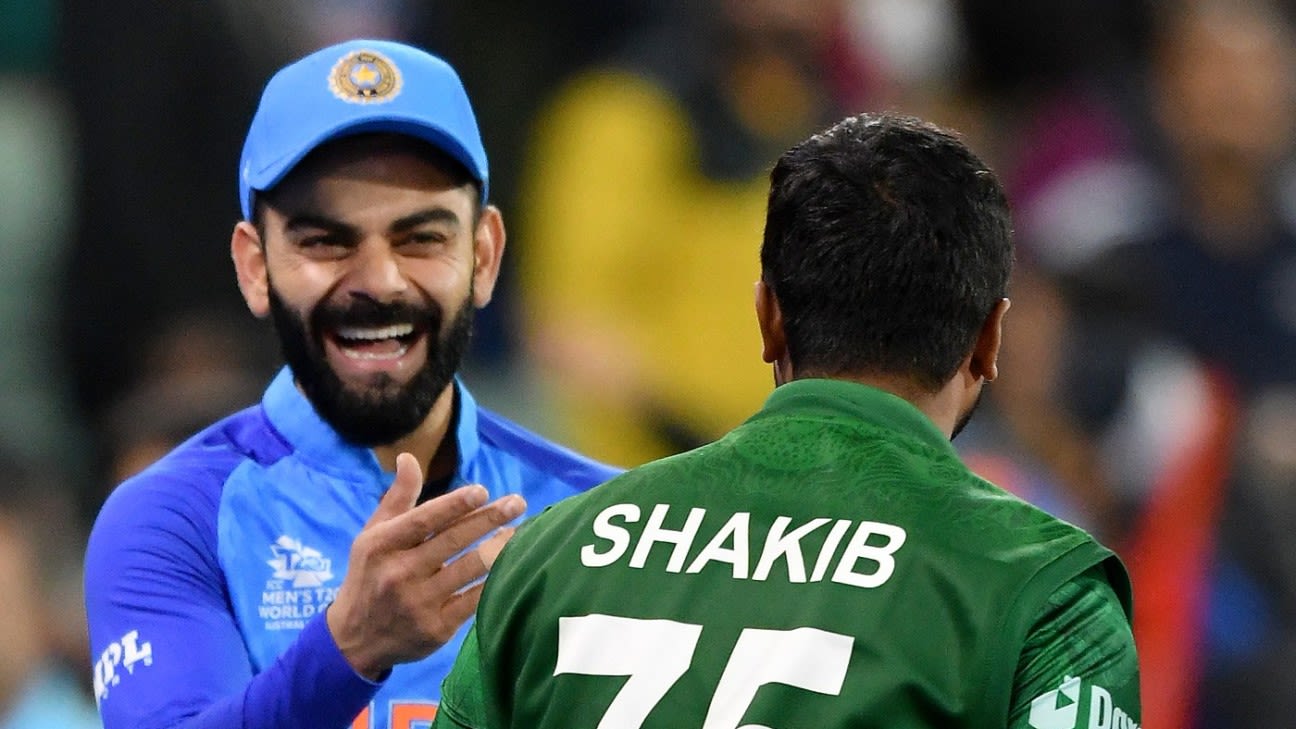 Following Bangladesh’s five-run loss to India on Wednesday, Nurul Hasan has claimed that the on-field umpires had missed an incident of “fake fielding” from Virat Kohli, which could have resulted in five potentially crucial penalty runs for Bangladesh.
The incident in question took place in the seventh over of Bangladesh’s chase at Adelaide Oval, when Litton Das played the ball towards the deep off-side field off Axar Patel. As Arshdeep Singh sent in the throw, Kohli – stood at point – feigned a shy as the ball was going past him. At the time, it went unnoticed in the field as the on-field umpires, Marais Erasmus and Chris Brown, didn’t take action, and the Bangladesh batters – Najmul Hossain Shanto was the other – didn’t point it out.
Nurul mentioned the incident while talking to reporters after the game.
“We all saw that it was a wet ground,” Nurul said. “Eventually, when we talk about these things, there was also a fake throw. It could have been a five-run penalty. That also could have gone our way, but unfortunately, even that didn’t materialise.”
Related
Cricket’s Law 41.5, pertaining to unfair play, prohibits the “deliberate distraction, deception or obstruction of [the] batter”, and if an incident is deemed to be a breach, the umpire can declare that particular delivery as dead ball, and award the batting side five runs.
The replay could be interpreted as an attempt at deception from Kohli, given that Arshdeep’s throw from the deep passed by his right hand at the same moment that he motioned a relay throw. ESPNcricinfo understands that the ruling, which needs to be made by the umpires in real time, is about the attempt to deceive the batters, rather than them actually being deceived.
Virat Kohli and Shakib Al Hasan share a light moment in a tense World Cup clash•Getty Images
It was one of three incidents that put umpiring in the spotlight during India’s narrow victory over Bangladesh. The first flashpoint came in the 16th over of the India innings, when Kohli, believing Hasan Mahmud had bowled two bouncers in his over, signalled a no-ball towards umpire Erasmus after top-edging a pull towards square leg.
Kohli’s gesture was upheld by Erasmus, who then found himself standing between Kohli and Shakib Al Hasan, who had made his way from the covers. A conversation ensued for about 90 seconds before the two players hugged each other and walked away.
The second incident came when the umpires approached Shakib, near the dugout, about play resuming following a rain break at the end of the seventh over, at which point Bangladesh, on 66 for no loss, were 17 runs ahead on DLS.
Shakib first knelt down by the boundary’s edge to get a sample of the wet outfield, before continuing to talk with the match officials. Rohit Sharma, his opposite number, joined in the discussion, but Shakib’s animated gestures suggested that he was not satisfied with the conditions.
Later, in the post-match press conference, Shakib didn’t elaborate on the matter.
ESPNcricinfo has reached out to the Bangladesh team management for a comment on all three incidents.
Tags: Bangladesh, ICC Men's T20 World Cup, India, India vs Bangladesh