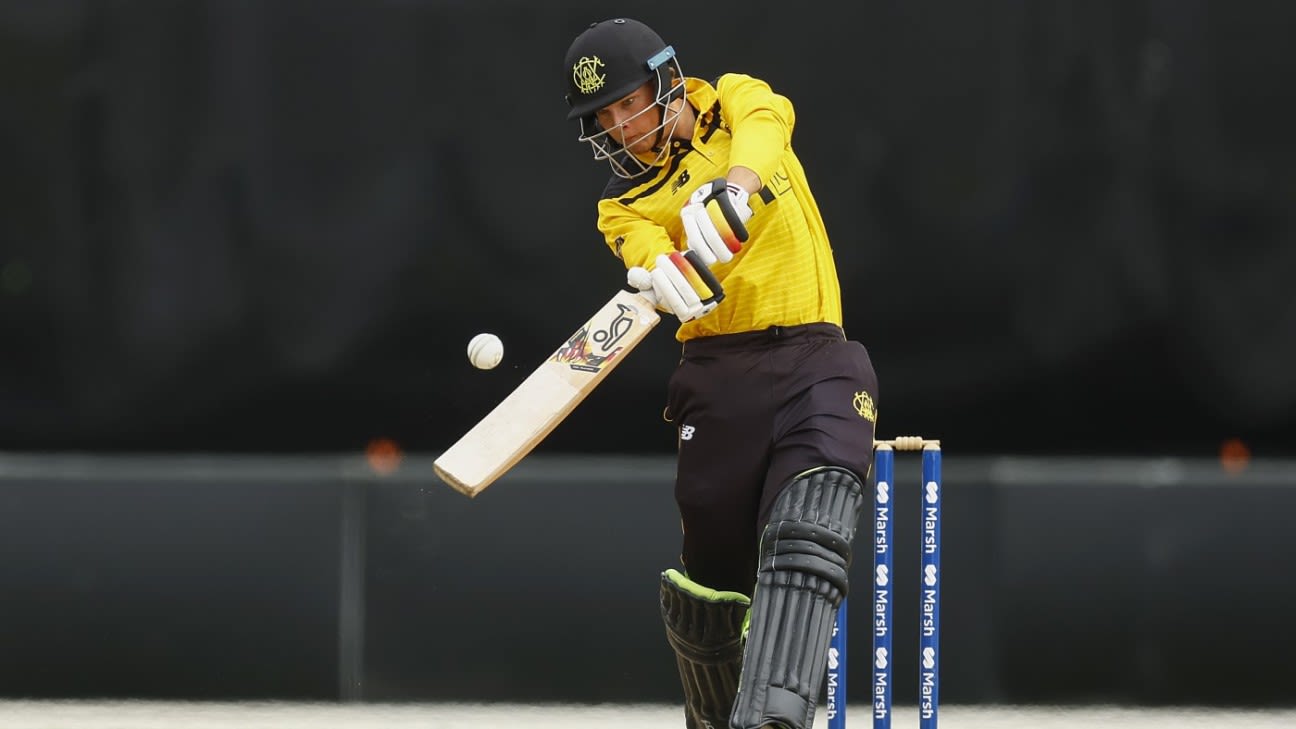 Western Australia 247 for 7 (Philippe 81, Bancroft 78*) beat Victoria 244 for 6 (Short 75, Tye 3-53) by 3 wickets
A whirlwind innings from Josh Philippe has set up Western Australia’s win over Victoria and allowed the holders to leapfrog Tasmania into top spot on the Marsh Cup table.
In a tense finale at the Junction Oval on Saturday, WA reached 247 for 7 to pass Victoria’s 244 for 6 with just four balls to spare in a match shortened to 36 overs each following morning rain in Melbourne.
Philippe set the victory platform at the top of the order with a whirlwind 81 that featured five towering sixes. By the time Philippe was out, WA had advanced to 114 from just 12.3 overs.
Philippe displayed a wide variety of shots in his 50-ball innings, including three massive sixes in a single Jono Merlo over. That over added 27 runs, with the medium pacer’s two overs costing 40 runs.
The ever-reliable Scott Boland was, almost inevitably, the bowler to put the shackles on Philippe, forcing the opener to spoon a mishit pull shot and offer a simple catch at midwicket. Philippe had scored a century against the Victoria in their last Marsh Cup meeting four weeks ago.
Fellow dangerman D’Arcy Short soon followed his opening partner back to the pavilion with 33 off as many balls, but the damage had been done. The steadying hand of Cameron Bancroft helped steer WA home with the former Test opener hitting the winning runs to end unbeaten on 78.
WA needed six from the final six deliveries after Will Sutherland delivered a superb penultimate over which yielded a wicket and just one run.
Earlier, makeshift opener Matthew Short cracked a rapid-fire 75 as Victoria set their opponents a challenging target after being sent into bat. Promoted from the middle-order, Short justified the move by leading the home side with a 59-ball knock that included two sixes.
Short, though, had little support from teammates and a host of batters were unable to build an innings after making a start. Test aspirant Marcus Harris came in at No.3 and posted 24, while opener Mackenzie Harvey contributed 28.
Andrew Tye made the most of the conditions to knock over three frontline opponents including Harris and in-form Victorian skipper Peter Handscomb who looked dangerous before his 26-ball innings ended on 30.
Tags: Cameron Bancroft, Josh Philippe, Matthew Short, The Marsh Cup, Victoria, Victoria vs West Aust, Western Australia