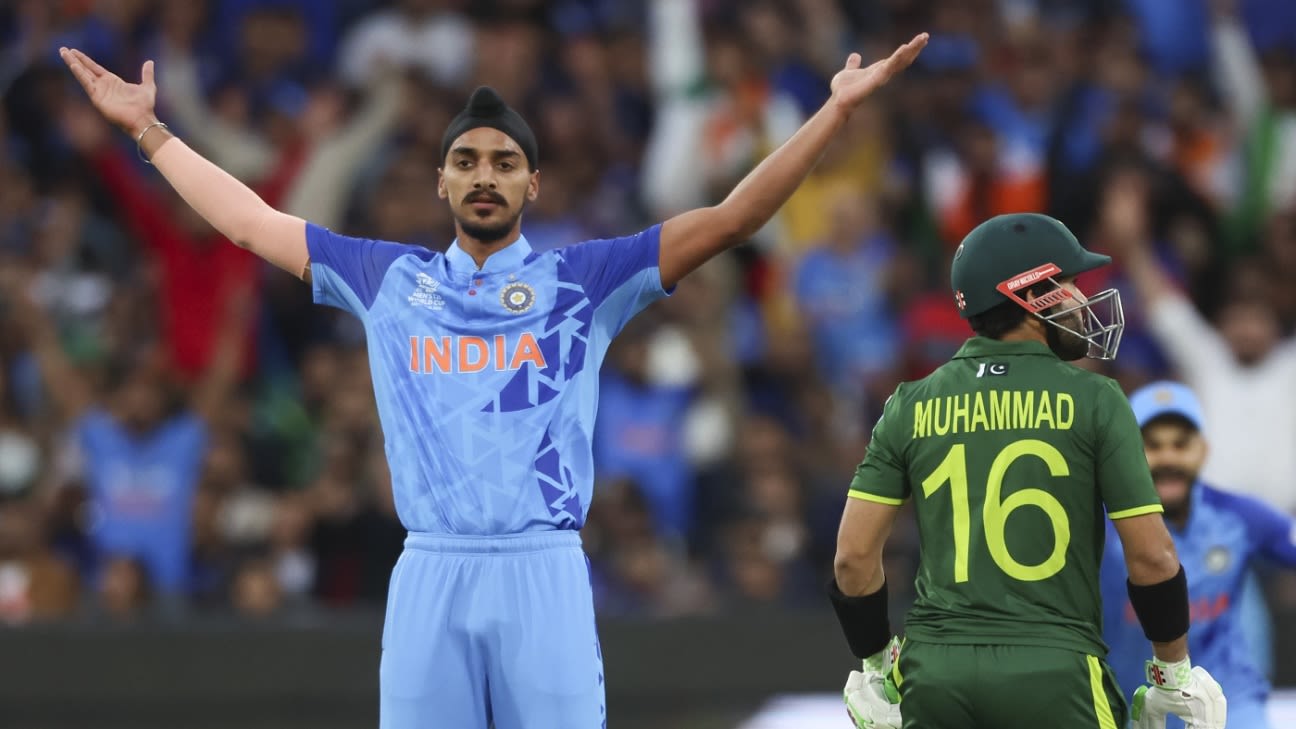 It was Arshdeep Singh’s first ball in a World Cup of any format, against Pakistan at a packed MCG, and he was on the money straightaway. Babar Azam, one of the best in the world, was trapped in front with one that swung in.
It didn’t end there for Arshdeep. He ended the night with 3 for 32, with Mohammad Rizwan and Asif Ali both falling to the well-directed short ball.
“He’s a young lad – only 21-22 [23] – and in the last three years, what I’ve seen is he’s transformed into a very mature bowler,” Anil Kumble said on ESPNcricinfo’s T20 Time Out programme. “And he can handle the pressure; his temperament is brilliant, we saw that. Even when that catch was put down in the Asia Cup, he came back and bowled really well.”
Related
The dropped catch Kumble was referring to came against Pakistan in the Super Four stage of the Asia Cup last month, when Arshdeep put Asif down in the 18th over, with Pakistan still requiring another 31 from 16 balls. Asif was yet to score at that stage, and went on to bring the equation down to seven off six deliveries. Arshdeep was called upon to bowl the final over, and took the game until the penultimate ball, including dismissing Asif off the fourth delivery. But Pakistan won a tight contest.
“To have a wicket off your first ball [at the MCG] – that too of Babar Azam – was fantastic,” Kumble said. “He got three main batters of Pakistan – Rizwan, Azam and Asif. I thought it was brilliant, the way he bowled and he held his nerve.”
Stephen Fleming also said that he was “really impressed with Arshdeep’s temperament”.
Arshdeep Singh picked up 3 for 32 at the MCG on his World Cup debut•Associated Press
“Hundred-thousand people at the MCG, and you come in with your first ball right on the money,” Fleming said. “It was a great start for him and for India. So his temperament – I’ve witnessed it first hand in the IPL – [and] his ability to absorb pressure at the death… today it was right at the start.”
Kumble, who has been Arshdeep’s coach and seen his development at Punjab Kings in the IPL, also spoke about how he has added new weapons to his arsenal.
“Initially, he had lost the ball coming back in [to the right-hander],” Kumble said. “I thought Damien Wright, who was the bowling coach [at Kings], worked on him. He [Wright] had worked with Trent Boult as well when he was the New Zealand coach, and I’m really happy that Arshdeep is not just getting the ball back into the right-hander, but also taking the ball away. If you see it, it’s not just the angle, but he’s also swinging the ball away, which is a real bonus for Arshdeep.”
Pakistan’s innings against India ended at 159, and Arshdeep said before India began their chase – which went up to the final ball before India earned the win – that he just wanted to make his World Cup debut a memorable one.
“I just wanted to enjoy the moment. I guess it’ll never come again, so I just wanted to enjoy myself and have fun,” he said on Star Sports. “We wanted to make use of the long square boundaries, so the plan was to hit the wickets and the pads. I guess we’ll do our best and chase this down.”
Tags: Anil Kumble, Arshdeep Singh, ICC Men's T20 World Cup, India, Pakistan vs India, Stephen Fleming