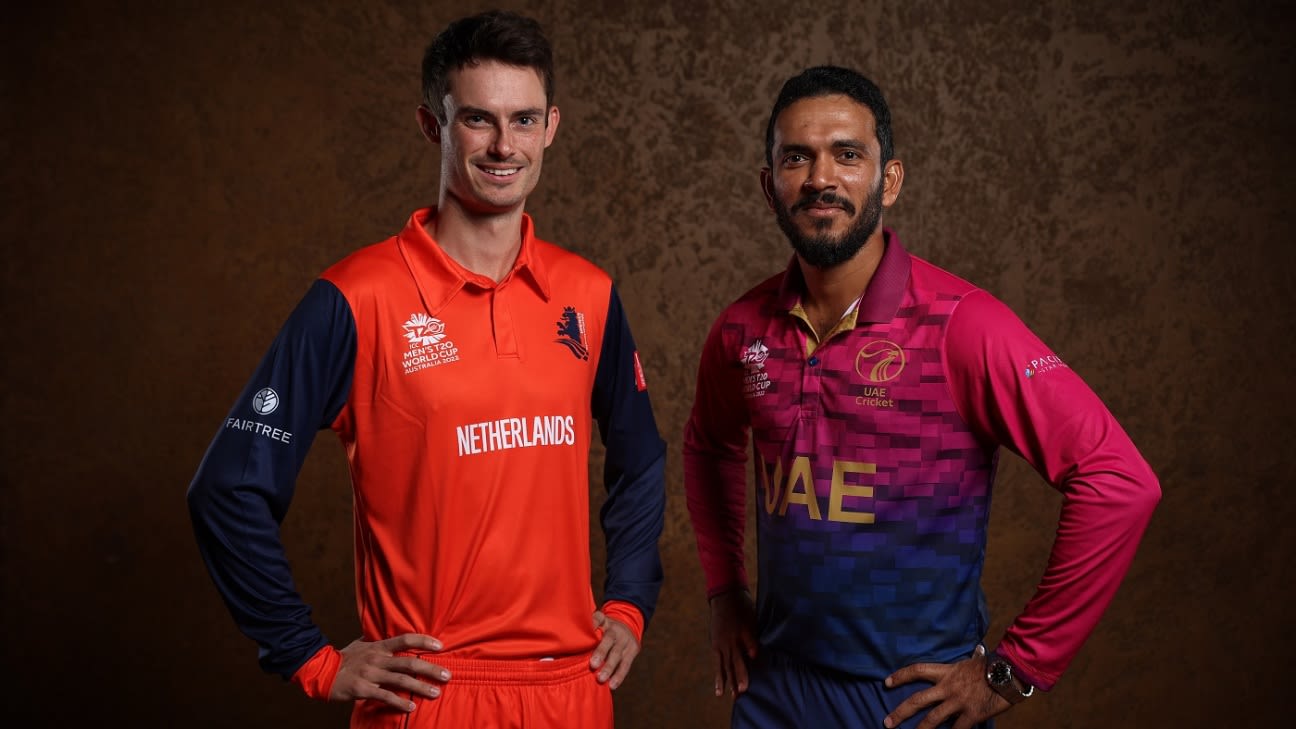 One squad has only one player who has been part of a World Cup before; the other carries 12 survivors from a disappointing campaign – three losses from three matches – that took place just a year ago. But neither UAE nor Netherlands are really feeling the heat ahead of the first round of matches at the men’s T20 World Cup.
“All the pressure is on Sri Lanka and Namibia in our group, having played in the Super 12s last year,” Colin Ackermann, the Netherlands batter, said ahead of their opener against UAE in Geelong.
Related
While the expectations on both Netherlands and UAE might be low, preparation has been high, specifically when it comes to understanding Australian conditions.
Netherlands packed their pre-tournament time with warm-up matches in Adelaide and Brisbane. They also brought in World Cup-winning coach Gary Kirsten and former Australia allrounder Dan Christian to their coaching staff to ready them for the challenges ahead.
“I feel like our preparation this year is much better than last year,” Ackermann said. “And with Gary, he brings with him a wealth of experience, having coached some of the best teams in the world. He has also coached here in Australia with Hobart Hurricanes, so he brings a bit of experience of different grounds.
“He is a fantastic batting coach, he understands the game extremely well, and the pressure points. He has worked closely with our batters, working on different options against certain types of bowlers, so he has made a big impact in a short space of time.”

“We are colourful now for the first time. We’ve got a fresh kit and a fresh team, and we’re looking for fresh performances”
Chirag Suri is excited about UAE’s new kit

UAE have also been in Australia for some time, and spent it getting familiar with conditions that are markedly different to home.
“With the wickets here, we know what to expect. There’s a bit more bounce in the tracks compared to back home,” Chirag Suri, UAE’s opening batter, said. “And dimensions of the grounds are different. Certain grounds are bigger in certain areas, it’s not the same circular grounds we get back home, so it’s good that we came earlier. We are in sync with conditions.”
The last time UAE appeared at a major tournament was in Australia seven years ago for the 2015 ODI World Cup. No one from that squad has made the trip this time, and neither has their regular grey kit, which has been swapped out for a strip that reflects what the Emirates Cricket Board called “the beautiful winter” of their region. With dark blue bottoms and tops that brighten from blue through purple to magenta on top, they mimic a sunset (or a sunrise) and hope the new outfits will also translate to good results.
Ahmed Raza is the only UAE player with any World Cup experience•Getty Images
“It’s a nice change. We are colourful now for the first time. We’ve got a fresh kit and a fresh team, and we’re looking for fresh performances,” Suri said. “There’s not one person in this team who has played a World Cup for UAE before [except Ahmed Raza, who was at the 2014 T20 World Cup]. It’s a completely new team, so the results could be completely different as well.”
Like Netherlands in 2021, UAE lost all three matches the last time they played a T20 World Cup, in 2014. The only match they have won at a global ICC event was incidentally against Netherlands, at the 1996 ODI World Cup. It’s a record they hope to improve on as the spotlight grows on their 20-over game.
The UAE will host the inaugural ILT20 tournament in January 2023, and while it will be headlined by a large international contingent, there are also aims to grow the local game.
The T20 World Cup presents an ideal shop window for the UAE players to show what they can do.
“Obviously the league coming is a big bonus for the players. It’s a huge platform for us to showcase our talent. We are producing a lot of good young players and to have this sort of platform, at that age, to rub shoulders with the best in the world, they’ll get to learn so much,” Suri said. “I think the guys are going to really enjoy it and good performances here will put us in good stead going into January.”
Tags: Chirag Suri, Colin Ackermann, ICC Men's T20 World Cup, Netherlands, U.A.E. vs Netherlands, United Arab Emirates