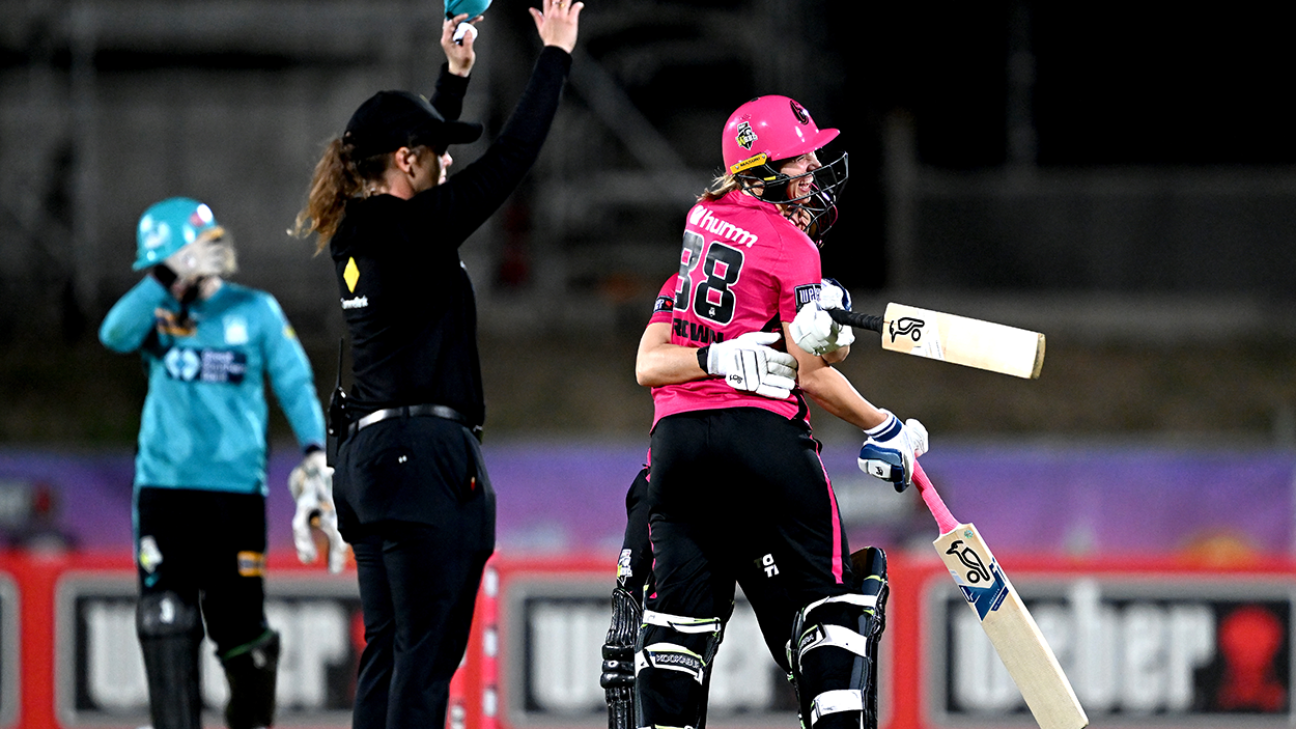 Sydney Sixers 6 for 143 (Perry 55, Burns 50) beat Brisbane Heat 8 for 141 (Redmayne 49, Brown 3-20) by four wickets
Ellyse Perry made an early statement in her bid to win back an Australian Twenty20 spot, starring with bat and ball in Sydney Sixers’ tournament-opening WBBL win over Brisbane.
Chasing the Heat’s 8 for 141 for victory, Perry hit 55 from 48 balls to help Sixers claimed a thrilling victory with one ball and four wickets to spare in Mackay on Thursday night when Maitlan Brown struck her first delivery for six with five runs needed.
It came after Perry had taken 2 for 27 from her four overs with the ball, appearing to bowl with more control than in previous summers on return from a back injury.
Related
Perry has not played a T20 international for Australia since last October, having missed out on selection in the shortest format during last summer’s Ashes and the Commonwealth Games.
However the retirement of Rachael Haynes and Meg Lanning’s personal leave have opened the door for a possible return, with several players vying for the top-order spots. And Perry laid the first marker.
With her scoring rate previously the issue in T20 cricket, Perry struck seven fours in her innings against the Heat and made a point to go after the ball just as she did in the recent Hundred competition.
Perry at one point crunched a lovely cover drive for four off Courtney Sippel, before playing her signature cut shot the next ball to find the rope behind point. She brought up her 50 off 42 balls when she pulled Nicola Hancock for 4, before being caught trying to sweep Jess Jonassen.
Perry shared a 93-run fourth-wicket stand with Erin Burns, who notched up 50 from 37 balls. Sixers stalled when the pair both fell, before Maitlan Brown saved the Sixers’ night with a first-ball six off Georgia Voll when Sydney required five off the final two balls.
“I don’t know what I was thinking,” Brown said. “I was coming down the pitch before she even released it…and it paid off.”
Earlier, fellow national team candidate Georgia Redmayne impressed at the top of the order for the Heat.
The left-hander got off the mark with a glorious drive from Lauren Cheatle, and worked her way to 49 before hitting Cheatle straight to backward-square leg.
Redmayne also backed it up with the gloves, taking a smart stumping standing up to the wickets to quick Jess Kerr to remove Ash Gardner when she overbalanced on 2.
Teenage star Voll hit 32 for the Heat, before Brown dented Heat’s late charge with figures of 3 for 20 with the ball.
Tags: Brisbane Heat Women, Ellyse Perry, Erin Burns, Heat Wmn vs Sixers Wmn, Maitlan Brown, Sydney Sixers Women, WBBL

Headless Ganguly, and the fair and lovely worm