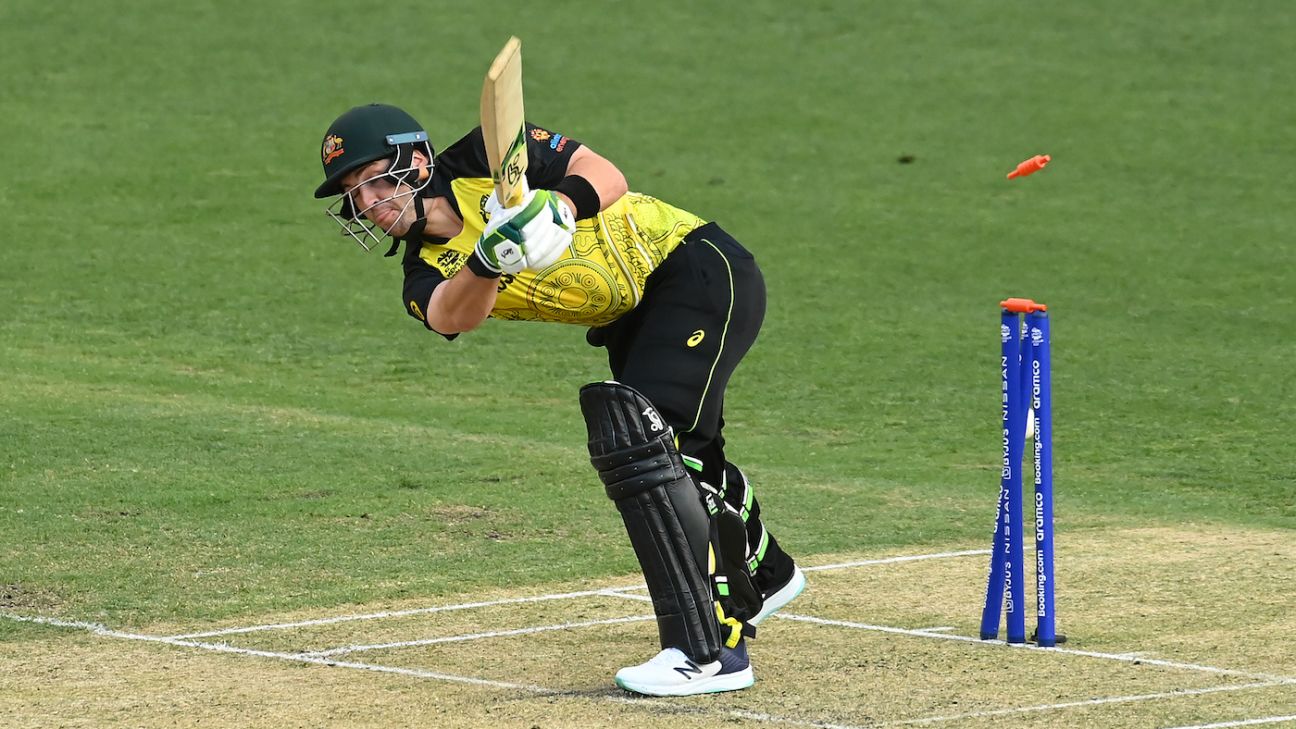 Indians 186 for 7 (Rahul 57, Suryakumar 50, Richardson 4-30) beat Australians 180 (Finch 76, Marsh 35, Shami 3-4, Bhuvneshwar 2-20) by six runs
It took till the final over of the Australians vs Indians warm-up game for Mohammed Shami to get into action, and what a return it was for him. Virat Kohli helped, with a stunning one-handed catch backtracking at long-on, and Ashton Agar ran himself out, and then Shami went yorker-yorker off the last two balls, to finish with 3 for 4. Match over. The Indians had scripted a come-from-behind win by six runs in Brisbane.
With the Australians needing 11 to win off six balls chasing 187, Rohit Sharma called on Shami, back after time away from the format and a bout of Covid-19, and playing his first representative game since mid-July. The target became seven off four, but that’s when all the drama started.
Not too long before that, the Australians were 171 for 4, with 16 to get from two overs. But Aaron Finch, after a solid half-century, and Tim David fell off successful balls. Finch was bowled by Harshal Patel with a slower yorker, delivered from wide of the crease, for a 54-ball 76. And then it was a moment of Kohli brilliance, as his pick-up-and-throw on the run from midwicket caught David short. And then it was all Shami.
Earlier, asked to bat, the Indians were off to a flier with KL Rahul, particularly, taking the aggressive route from the get-go. By the end of the fifth over, India had raced to 56 for no loss, with Rohit on 1 off 5 and Rahul on 49 off 25. He soon reached his fifty off 27 balls before Rohit too got into the act, smashing Glenn Maxwell for a six and a four.
Aaron Finch hit a 54-ball 76 to lead the Australia chase•ICC via Getty
The Australians struck back through Maxwell and Agar, who got rid of the openers in consecutive overs. Kohli and Suryakumar Yadav then got together and kept the scoreboard ticking. With massive square boundaries in use, the two ran brilliantly while also collecting boundaries at every chance.
Suryakumar used the angles like he always does, finding the gaps around the square-leg region while also playing inside-out drives over the covers. Kohli struck a six straight down the ground but wasn’t always fluent in his stroke play with a lot of his mistimed shots landing perilously close to fielders. He eventually fell to a Mitchell Starc bouncer, top-edging to deep fine-leg. Hardik Pandya came and went while Dinesh Karthik holed out to deep midwicket for 20.
Suryakumar, though, carried on, reaching his fifty off 32 balls. His innings was laced with six fours and a six, and while his dismissal was a tame one – a catch back to Kane Richardson off the leading edge attempting a flick off a full toss – he would have been pleased with the knock. R Ashwin’s first-ball six over point helped India reach 186. Richardson led the bowling for the Australians with 4 for 30, while Starc was at his pacy best.
The Australians started their chase positively with Finch and Mitchell Marsh among the boundaries from the outset. It was Marsh who found the fence initially, with Bhuvneshwar Kumar, Arshdeep Singh and Hardik bearing the brunt. Finch then lay into Harshal and Ashwin as Australia racked up 64 runs in the powerplay.
For the most part, they looked on course. Till they fell apart at the close.
Tags: Aaron Finch, Australia, Australia vs India, ICC Men's T20 World Cup, India, KL Rahul, Mohammed Shami, Suryakumar Yadav, Virat Kohli

West Indies will go into Tests with confidence, says Smith