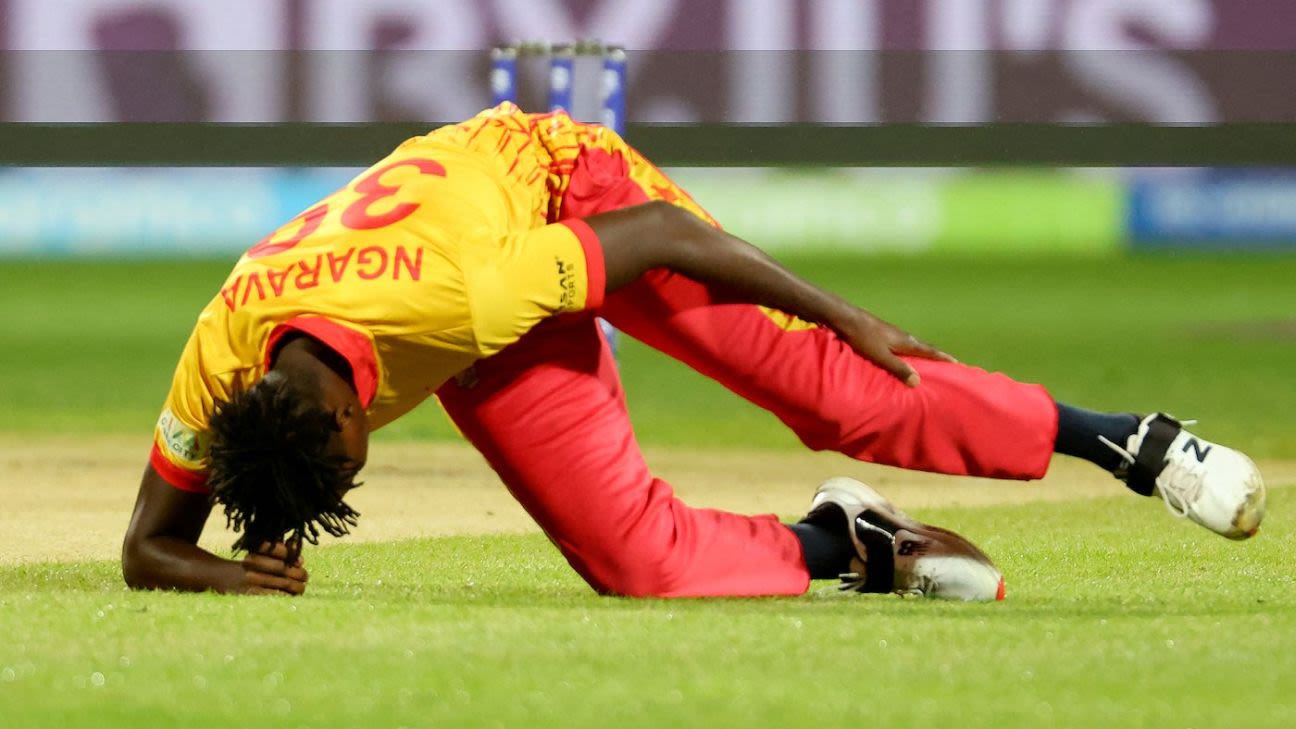 Zimbabwe coach Dave Houghton was fiercely critical of the decision to carry on with his side’s game against South Africa even as the rain in Hobart grew heavier, saying he didn’t believe the “conditions were right to play”, and that Zimbabwe “shouldn’t have bowled a ball”.
Related
Rain halted Monday’s game in Hobart on multiple occasions, before it was finally called off with South Africa on the verge of victory. South Africa needed a further 13 runs to win with all ten wickets in hand and 24 balls to go, but the innings hadn’t yet reached the five-over mark, the mandatory cut-off for a game to produce a result. During the chase, Zimbabwe’s bowlers and fielders complained several times about the wet outfield as the rain grew steadily heavier. Even when fast bowler Richard Ngarava slipped and had to be taken off injured, the umpires kept the players on.
It was a decision that left Houghton furious. “He’s lying in the changing room with a bunch of ice strapped to his ankle,” Houghton said. “Obviously we’re not too happy about the fact he’s not in a great space for bowling at the moment. We’ll have to assess it in the next day or so.
“I thought the rain had got so heavy it was ridiculous. Most of the evening or nighttime, it was misty. But it got to the stage where we could actually hear it thumping on the rooftop in the dugout. To me, that’s no longer drizzle; that’s time to get off the field. The field was wet when we started and when South Africa fielded. They were difficult conditions for both sides but it just got more and more wet as we bowled. When your keeper’s sliding trying to move down the leg side standing up to the spinners, it’s too wet. I don’t think the conditions were right to carry on playing.”
Richard Ngarava had to leave the field after taking a tumble•AFP/Getty Images
ESPNcricinfo understands the entire Zimbabwe unit were unhappy at what they considered were dangerous conditions, and believed higher-profile teams wouldn’t have been put in that position. While Houghton declined to comment publicly on whether he thought the umpires would have made the same decision if the roles had been reversed, he was emphatic in his disagreement with the call.
“I understand the need to try and get these games on for the public and for TV.” he said. “I understand the need to try and play in slightly inclement weather to try and get a result. But we overstepped that mark in this game. The umpires are the guys making those decisions in the middle and they seemed to think it was fit to play. I disagree with them. But there’s not much I can do off the field.”
After Ngarava’s injury, Zimbabwe turned to spin rather than risk their premier pace bowlers, with Sikandar Raza bowling the third over. But when Sean Williams was handed the ball for the fourth over, Houghton revealed Williams thought enough was enough.
“Craig [Ervine, Zimbabwe’s captain] and Raza had had a word with the umpires and asked “what do you constitute as rain because we’re getting quite wet here?” Eventually Sean Williams said just as he was about to start bowling he didn’t think he could bowl. It was too wet. And then they brought us off.”
South Africa coach Mark Boucher, meanwhile, suggested that the situation of the game may have played a part in Zimbabwe’s reluctance to carry on. “If Zimbabwe were in our position they would have wanted to carry on playing,” he said. “We bowled with a ball that was quite wet as well. We were in a very good position. You walk away from this game thinking we were hard done by. We are not there to make the calls, that’s what officials do and officials made the call and we’ve got to live with their decisions.”
The abandonment leaves South Africa and Zimbabwe with one point each, putting South Africa under early pressure in a group where, on paper, they’re expected to compete for two available semi-finals slots with India and Pakistan. On a frigid night in Hobart, there was plenty of heat from both coaches as an incensed Zimbabwe fumed at an injury to a key fast bowler while South Africa seethed at a win that, not for the first time at a World Cup, was denied to them by rain.
Tags: Dave Houghton, ICC Men's T20 World Cup, Mark Boucher, Richard Ngarava, South Africa, Zimbabwe, Zimbabwe vs South Africa